Lagoon Island and Campus Point are coastal mesas situated between the UCSB campus lagoon and the Santa Barbara Channel. These sites are characterized by nearly vertical bluffs on their oceanward side, and steep vegetated slopes that descend into the campus lagoon. These areas have been the site of several restoration and research projects including coastal sage scrub restoration, experimental controlled burning to remove invasive brome grass, and oak woodland restoration. 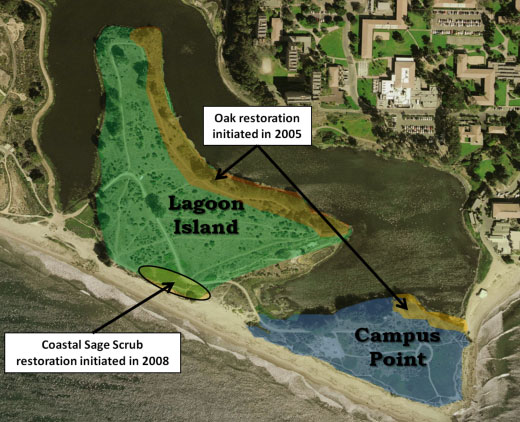 Much of Campus Point is covered with iceplant (Carpobrotus edulis), an exotic succulent that competes with native plants by forming thick mats that cover the landscape. Where iceplant is not abundant, the dominant species are the exotic rip-gut brome grass (Bromus diandrus), and natives coyote brush (Baccharis pilularis), and ragweed (Ambrosia psilostachya). Ice plant removal and coastal sage scrub restoration is planned for this area. 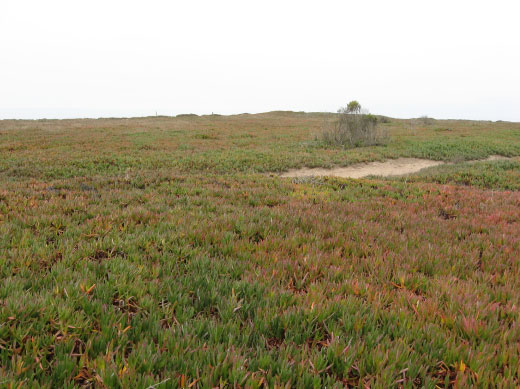 The lagoon Island site is largely dominated by exotic rip-gut brome grass (Bromus diandrus). Other exotic weeds that are abundant include wild radish (Raphanus satirus), scarlet pimpernel (Anagallis arvensis), Eucalyptus species, and sheep sorrel (Rumex acetosella). In 2008, the bluff-top at the southern edge of Lagoon Island was covered entirely with iceplant. This area was covered with black plastic from August to December 2008 to solarize the iceplant. Solarization is a process that kills the iceplant by trapping in heat and blocking sunlight. Native coastal scrub species were planted on the bluff during the winter of 2009. Additional restoration activities taking place on Lagoon Island include planting oaks on the north facing slopes and experimentation with prescribed burns to control the rip-gut brome grass. 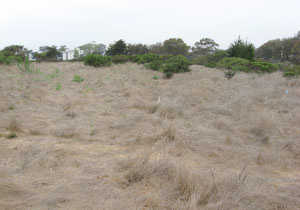 Figure 3: Native plants are becoming established in the area where iceplant was controlled. 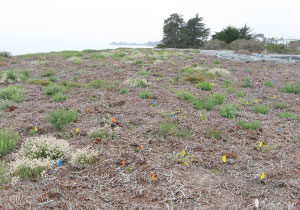 Based on historic maps, it is thought that much of UCSB was once oak woodland. The earliest map of this area is from 1871 and shows a large oak woodland covering what is now the northwestern portion of UCSB's main campus. A few large oaks in this area of the campus, like the one next to the Recreation Center, are thought to be remnants of the oak woodland pictured in the map. Based on the sharp straight contours of the mapped oak woodland and knowledge that much of the area was deforested in the 1800's by ranchers and the whaling industry, we believe that this oak woodland area extended much further and may have covered most of the UCSB campus. In 2006, CCBER sought to recreate the oak woodland habitat that once existed on the UCSB campus by planting nearly 2000 acorns along the north facing slopes of Lagoon Island and Campus Point with the hope that in 15 to 20 years a small oak woodland habitat will be established. 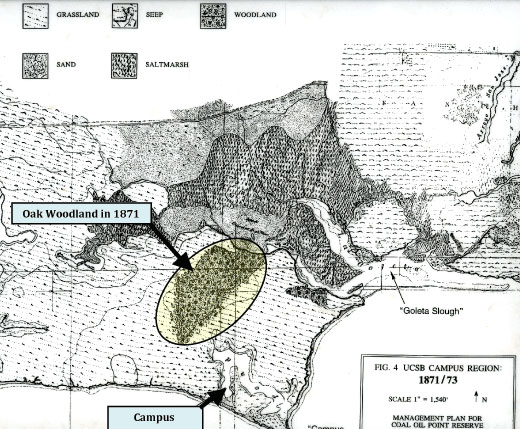 Figure 5: Map of the Goleta Slough and UCSB campus area in 1871.

Restoration research currently taking place on the Lagoon Island involves experimentation with controlled burning to remove a non-native annual grass (Bromus diandrus) that dominates much of the site. This research began in 2006 as a master's project by a UCSB graduate student who was interested in using fire as a tool for restoration. The project aimed to efficiently control Bromus diandrus by reducing its seedbank using high intensity burns. The project showed promising results for restoration, and is now being continued by CCBER as a management strategy for efficiently controlling exotic grasses on the site. 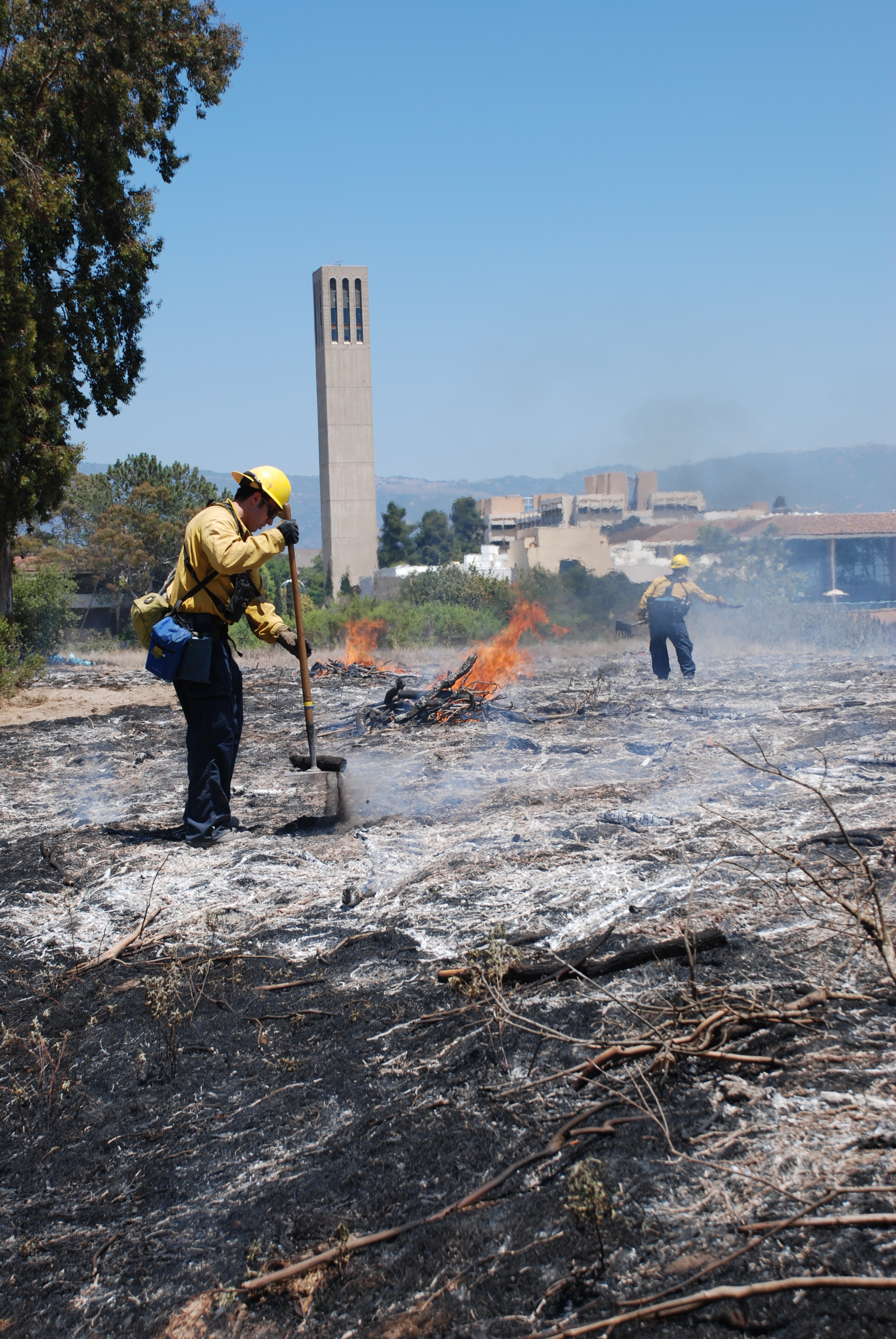 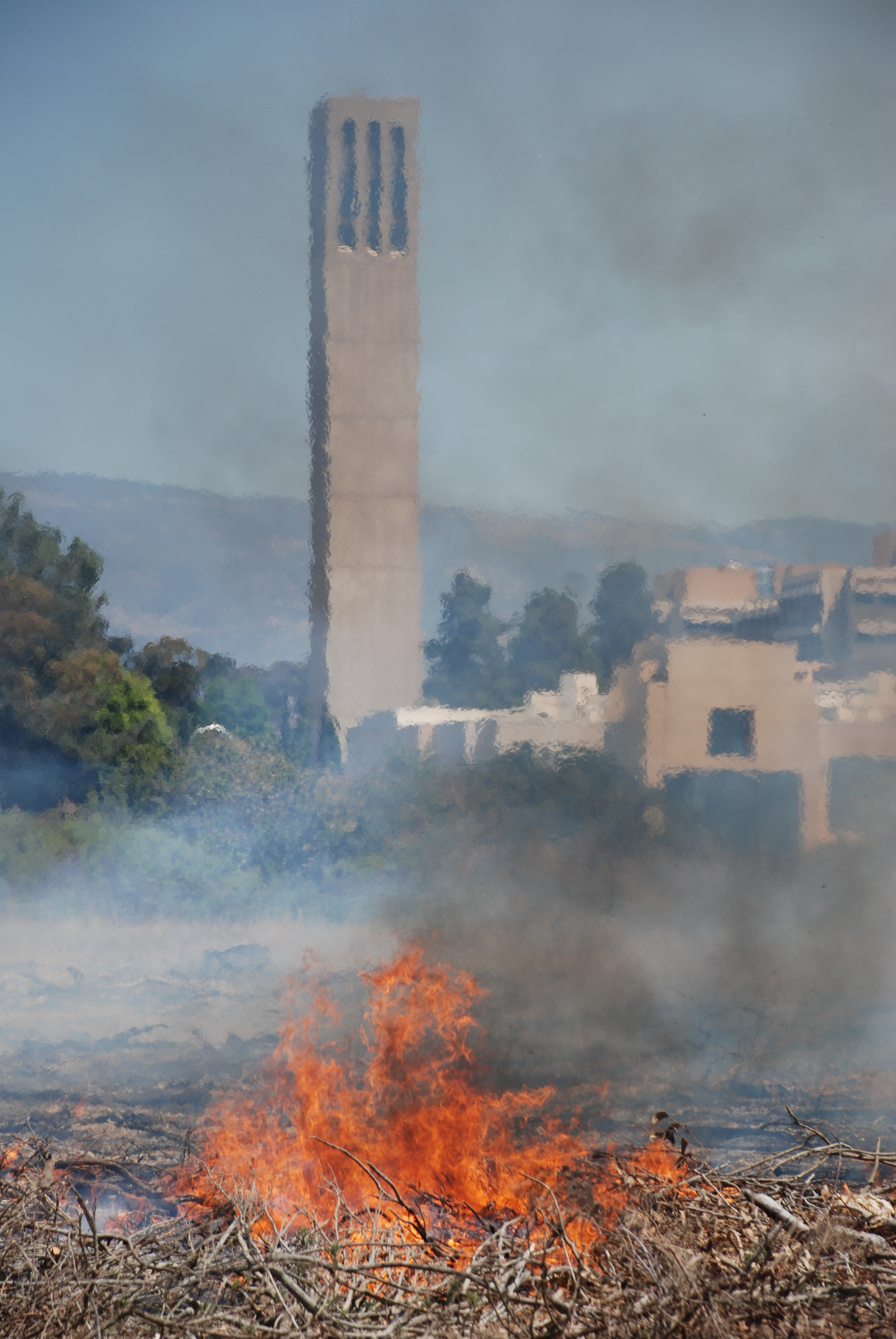