What is Environmental DNA (eDNA)?

Environmental DNA (eDNA) is a method of extracting and identifying fragments of DNA from sources that might otherwise be very time consuming to sample. It is a relatively new method of capturing the presence of organisms that might otherwise be missed. The Cheadle Center is now getting results from an eDNA assessment funded by Steve Senesac and the Associated Students Coastal Fund designed to assess how valuable this tool might be for understanding biodiversity at North Campus Open Space. The primary source of DNA was derived from sampling water in the estuary and wetlands to capture genetic signals from plants, algae, vertebrates, invertebrates, fungi and bacteria.  Other assessments included submitting samples of guano from shorebirds and ground up burrowing owl pellets to learn more about their diets; from bee pollen to understand plant/pollinator relationships, and samples of soil from different depths and amendments to understand how compost and biochar might influence microbial communities and, ultimately, soil function. This story covers initial results from data delivered from filtering water samples at various parts of Devereux Slough and NCOS wetlands. 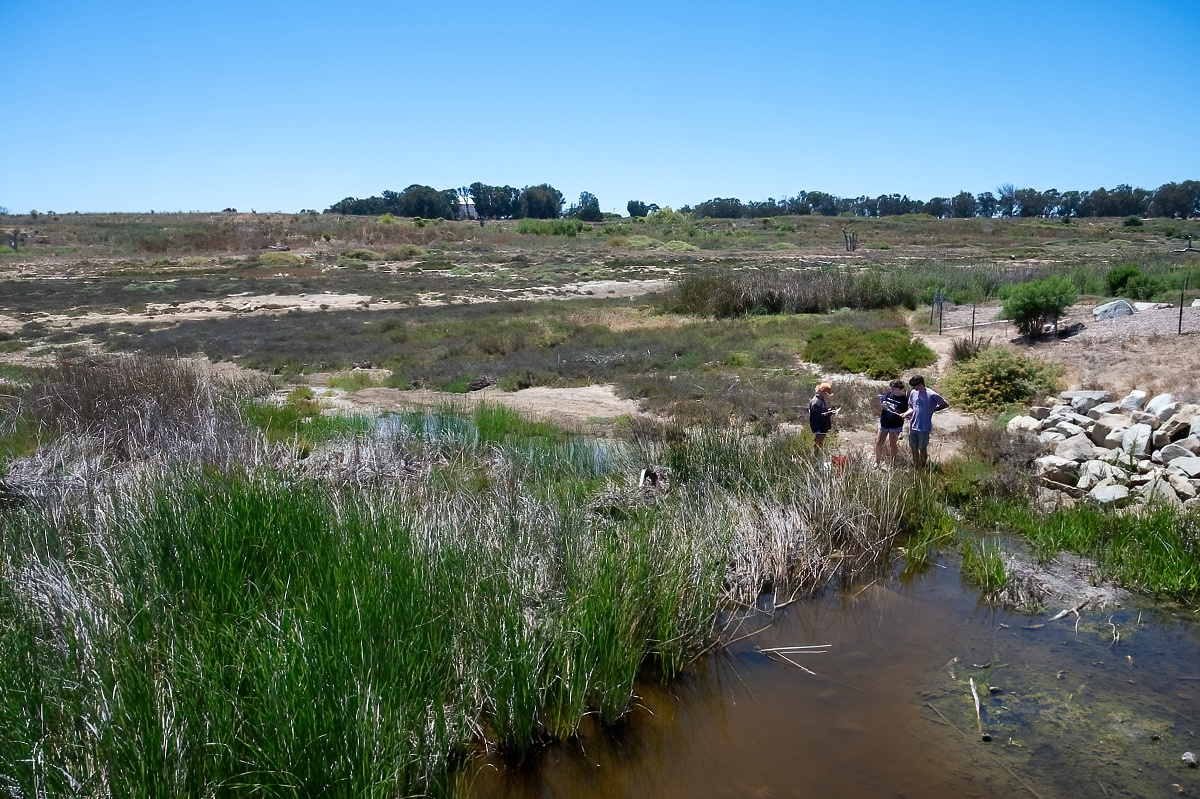 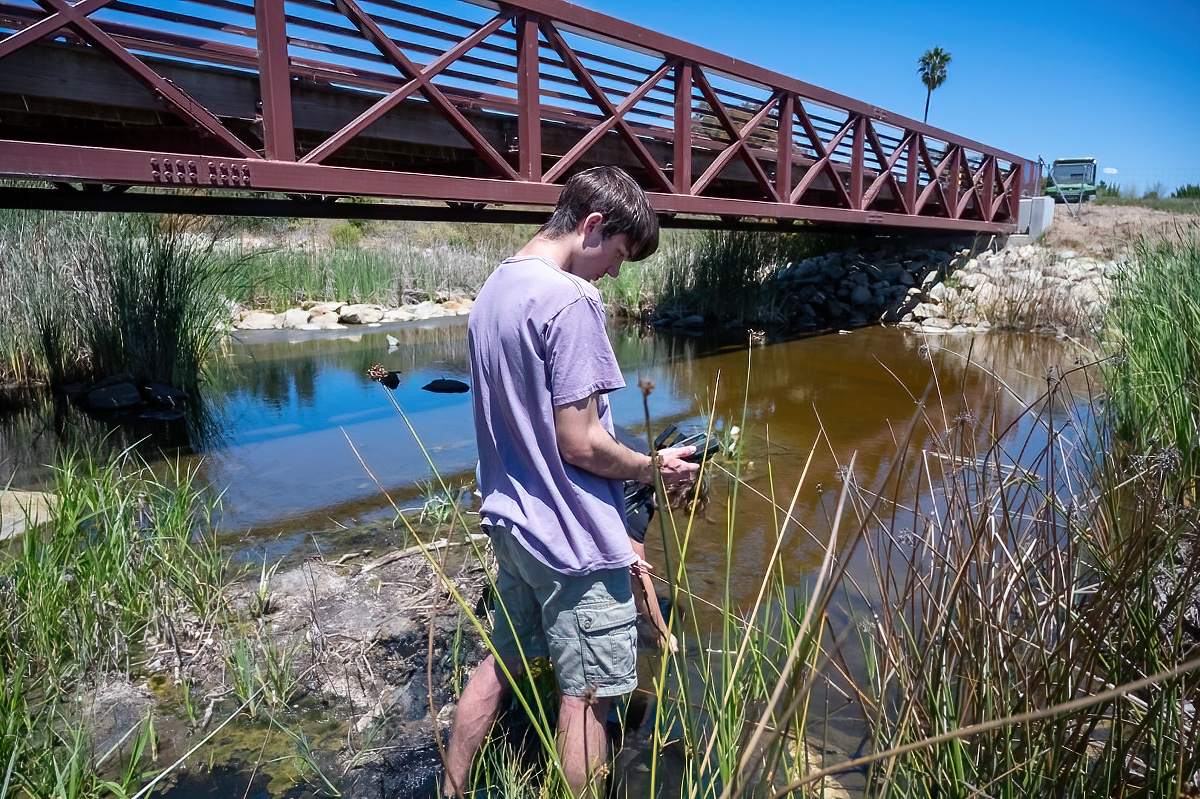 How we collect eDNA?

There are many ways to process eDNA. For our purpose we filter 60-360 mL of water through a 1 um (micron) filter and send it to a third party lab called Jonah Ventures. Once the samples arrive at Jonah Ventures they are sequenced and compared to data bases known as “libraries” of known DNA sequences. We have been collecting aquatic eDNA samples over the last 8 months from the sites where we currently conduct aquatic invertebrate sampling, and we plan to continue sampling for the remainder of the year. Once we have a full year of data we can analyze how the wetland flora and fauna changes throughout the year, compare to aquatic sampling and sorting results, and further examine how salinity and dissolved oxygen might affect the organisms in the water. 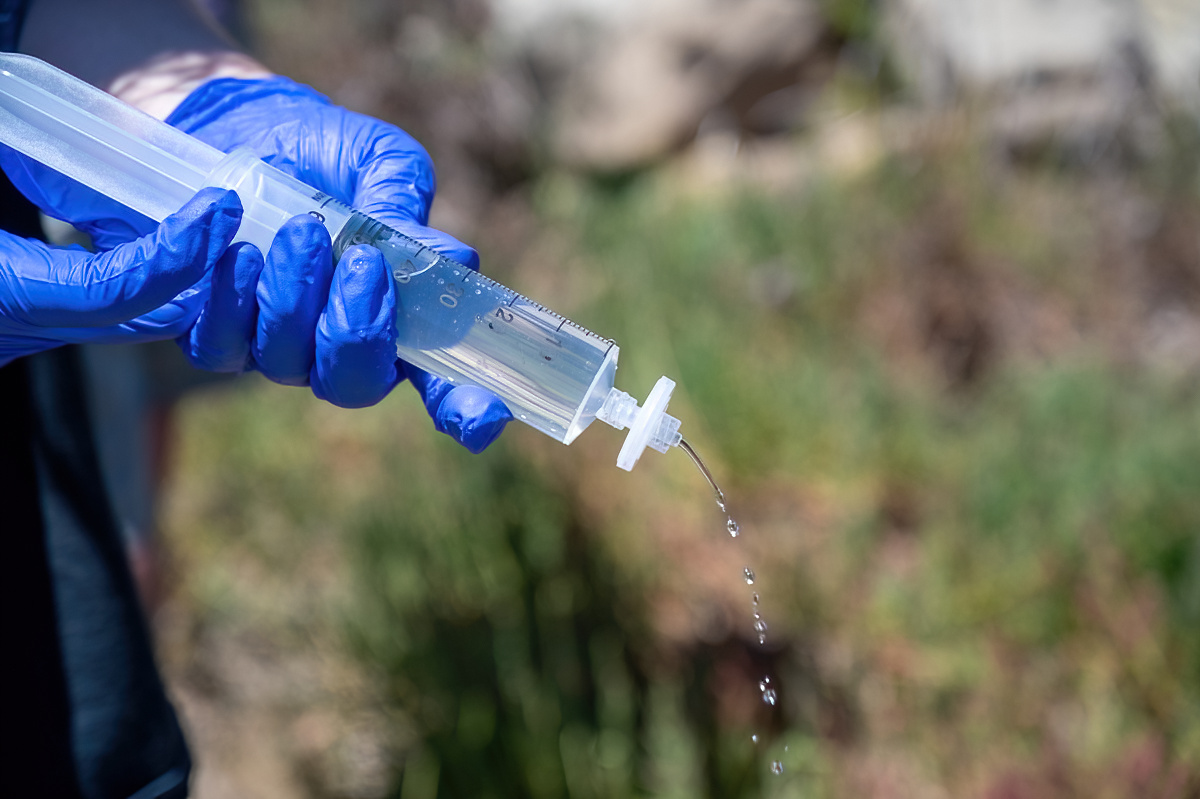 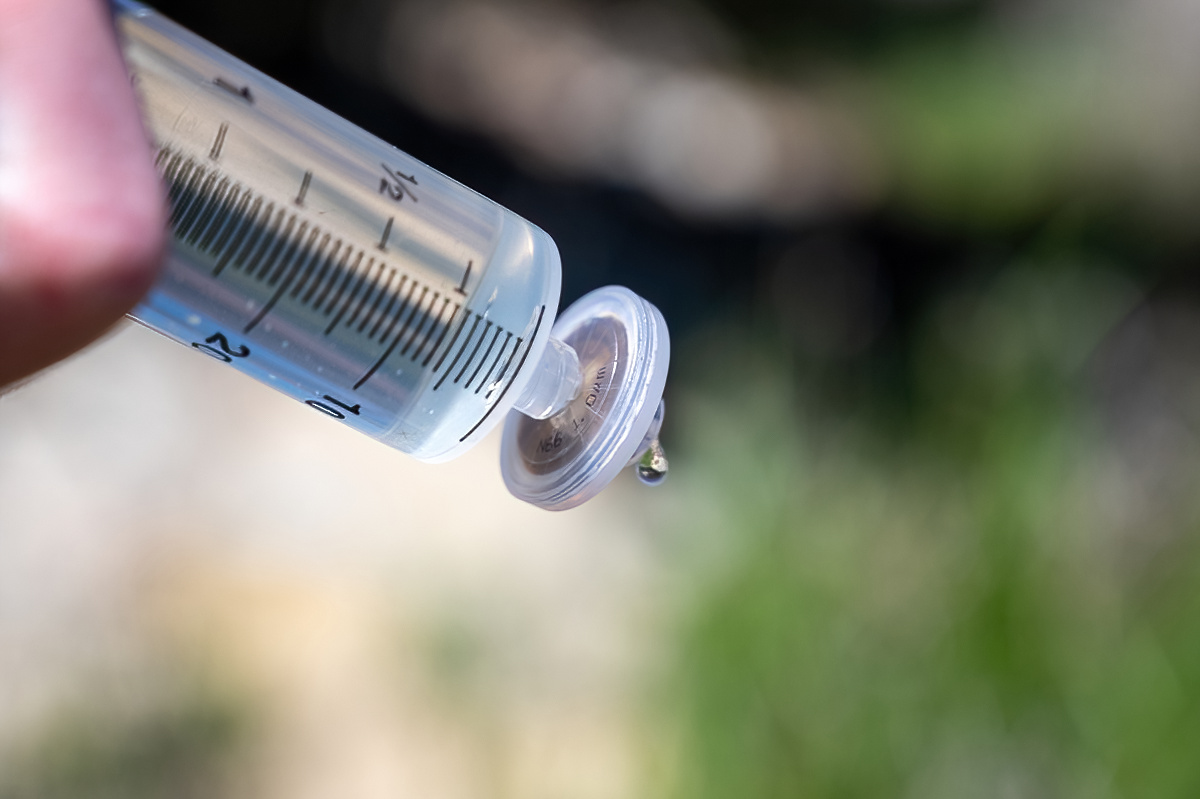 How are we using eDNA?

eDNA is useful because it can process a lot more data much quickly and with potentially more precision than hand sorting. eDNA can also identify organisms like bacteria, fungi and single cell algae that can be difficult and expensive to identify in the lab. For example, a UCSB student recently completed a project sampling the macro algae at NCOS, but microalgae, also known as phytoplankton, require a very expensive microscope setup and a high degree of expertise, and therefore was not included in the assessment. EDNA is used to fill in those gaps. Also, since DNA flows freely in the water, eDNA is also able to capture the entire water column. Our hand sampling methods for aquatic invertebrates and fishes typically only focus on one portion or depth of the wetland. For example, each year we work with permitted biologists to survey the estuary for fish. This assessment has not recently recorded the Pacific staghorn sculpin (Leptocottus armatus) in the slough, but it was detected in the eDNA sample. Staghorn sculpin is a benthic fish and perhaps the seining methods used in the survey were not able to capture that portion of the slough effectively. Similarly, another fish that was detected in the eDNA, mullet (Mugil Cephalus) are known to be particularly elusive and have not been captured by the seining method. 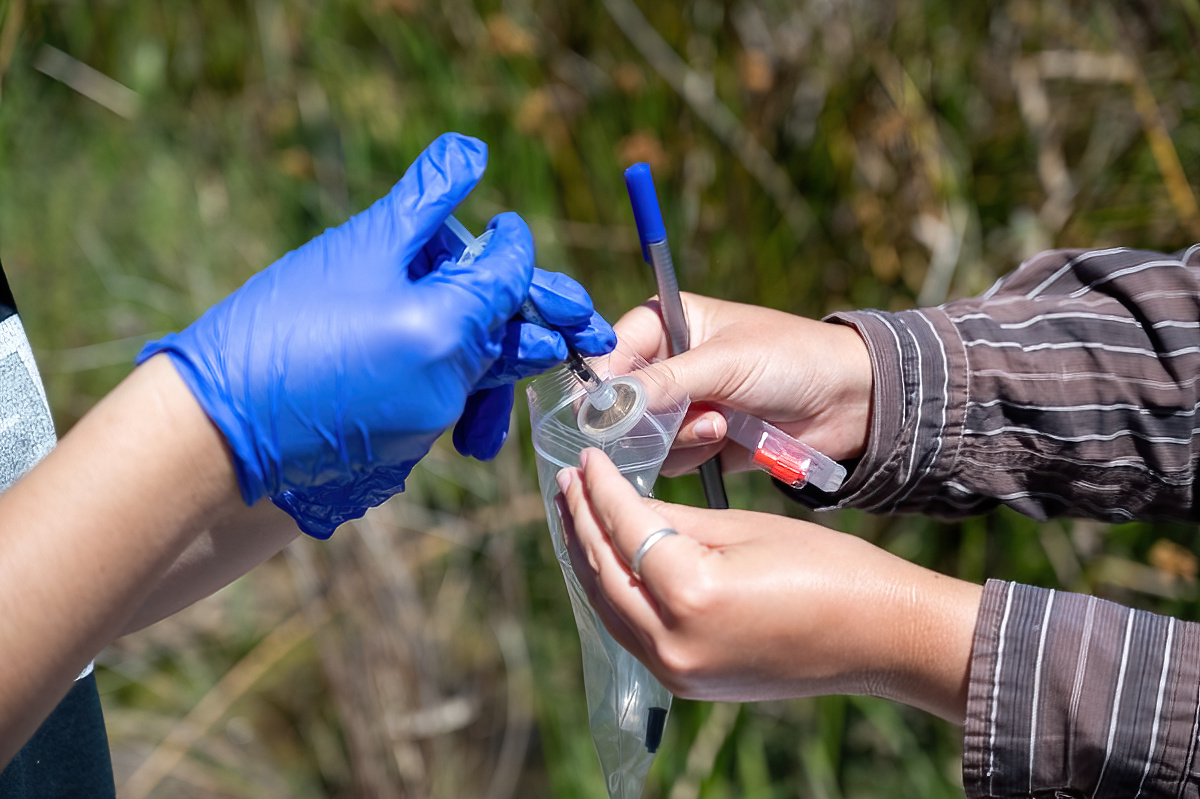 UCSB students Lauren Stiles and Mckenzie Goetz putting a preservative into the e-DNA sample they collected. 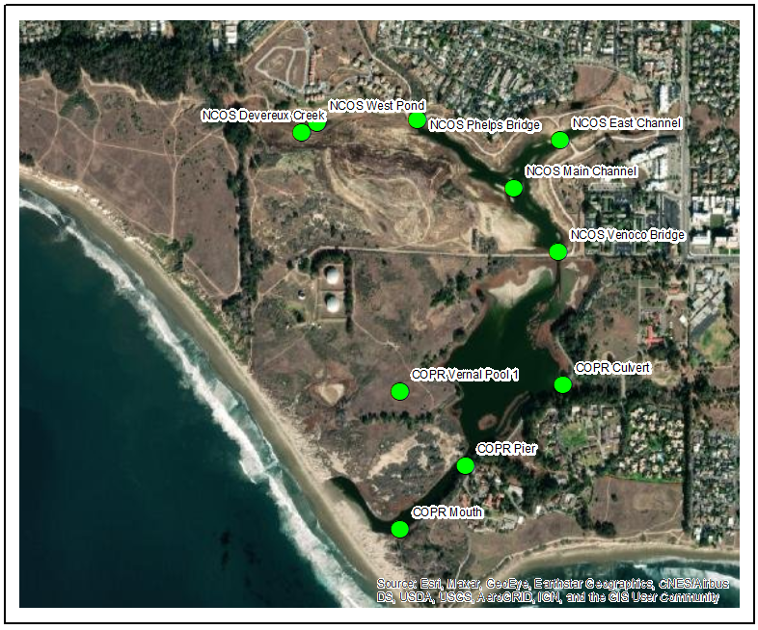 Map of sampling sites. All sites are sampled for eDNA as well as aquatic invertebrates to be sorted by hand. 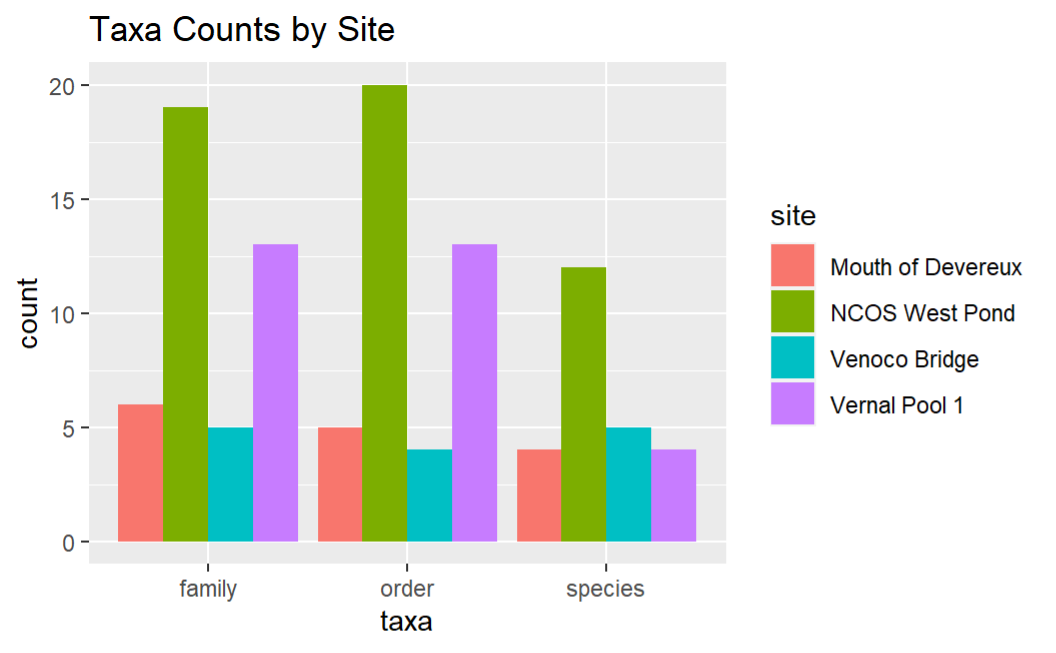 eDNA results at 4 of our sampling locations, data shows that DNA can be as specific as species, but more often can only identify organisms to a lower classification. We can see that sites with lower salinity (Vernal Pool and West Pond) have more DNA than sites with higher salinity (Mouth and Venoco Bridge). Credit: Chris Kratcha.

eDNA is a new technology and since it has some limitations it is important that we combine the results with local knowledge. Even though we collect samples with precaution such as wearing gloves, samples can be subject to cross contamination. One sample at West Pond came back with one result of Atlantic salmon (Salmo salar). We are looking more into the reasoning for this, but this shows that it is important to analyze eDNA results with caution. We can be more confident about results where the sequence is read multiple times (shown with darker branches in the taxonomic tree figures below). As for local knowledge, we know that pacific staghorn sculpin and mullet are both commonly found in estuaries of California. The Pacific staghorn sculpin was found in 2 different locations. While both of these observations increase our confidence that these species exist in our wetlands, only a visual observation by someone with identification expertise could verify the presence with 100% confidence. This supports that eDNA has its place - to indicate species that likely exist and inform local field staff what to look out for - but is not intended to replace local sampling.

Another instance where hand sampling results differed from eDNA results is the single instance of Daphnia and lack of copepod and ostracod identification in the eDNA. Our hand sorting methods indicate that Daphnia is one of our most common zooplankton species. The lack of daphnia and other macroinvertebrate DNA is likely due to the fact that macroinvertebrates shed less DNA than other species such as algae. This could be improved by running the macroinvertebrate DNA with more "libraries". Interestingly, one of the questions we wanted to answer was whether eDNA could be a substitute for the much more time-consuming process of hand sampling, sorting and identifying aquatic organisms, but the diversity from the eDNA was significantly lower than that derived from manual monitoring. We are working with Jonah Ventures to better understand why the eDNA does not capture the signal from aquatic invertebrates. A higher value of the eDNA may be to understand the ecological context of the manually sampled aquatic invertebrates from the data on otherwise elusive fish, as well as difficult to identify phytoplankton and microbes.

One interesting finding is that there are a lot of DNA matches for fish and algae species at West pond, a pond filled by rain water and water from Devereux Creek, but otherwise isolated from the larger estuary system (figure 5 and see map). This data confirms that the pond has a unique, separate function in the ecosystem relative to the continuous estuarine wetland. Environmental factors of the pond such as the low salinity and high dissolved oxygen provide a more suitable habitat for many species. The high presence of waterfowl who use this pond indicates that there is an abundant food source.

The Devereux slough mouth is generally saline throughout the year and may have lower biodiversity. Credit: Chris Kratcha. 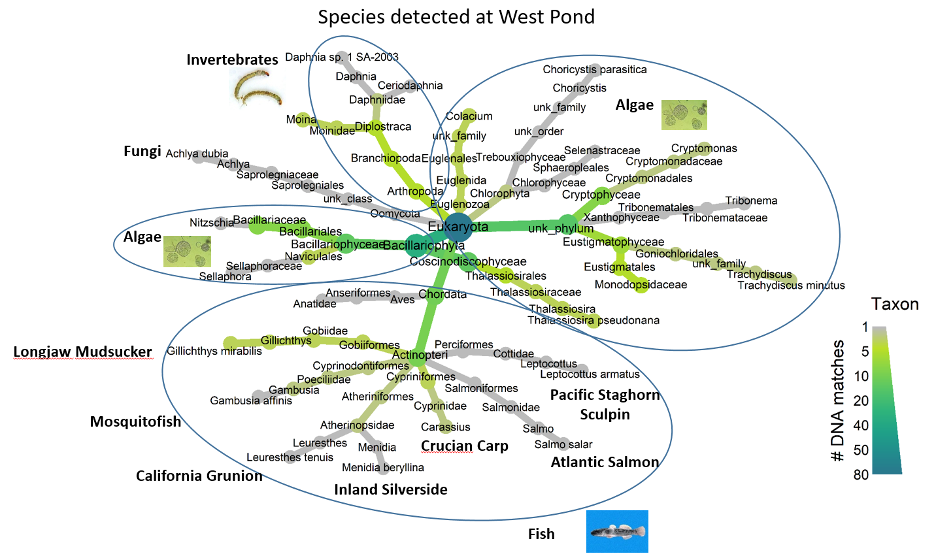 The western pond is primarily fresh water but dries out in the summer months. Credit: Chris Kratcha. 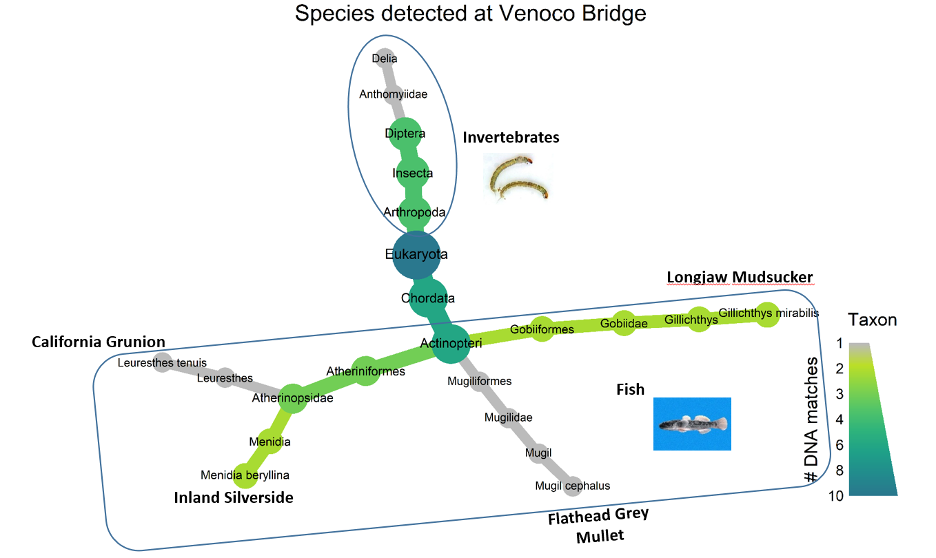 Venoco bridge has high salinity as water evaporates in the summer months, but is diluted to a lower salinity after heavy storms before the sand berm breaks and introduces seawater. Credit: Chris Kratcha.

Stay tuned for more results to come on eDNA, we are continuing to learn how we can interpret our data and hope to share more results on our aquatic eDNA results soon! We also plan to share results on the diet reconstruction of bees, burrowing owls and shorebirds as well as data on the microbes living in NCOS soil.