An essential component of the North Campus Open Space restoration project is its availability as an ecological study area for student researchers. Its close proximity to UCSB and diverse array of habitat types provides the perfect opportunity for students to find their passion in the field. This article highlights four students who have been conducting field-based research at NCOS. 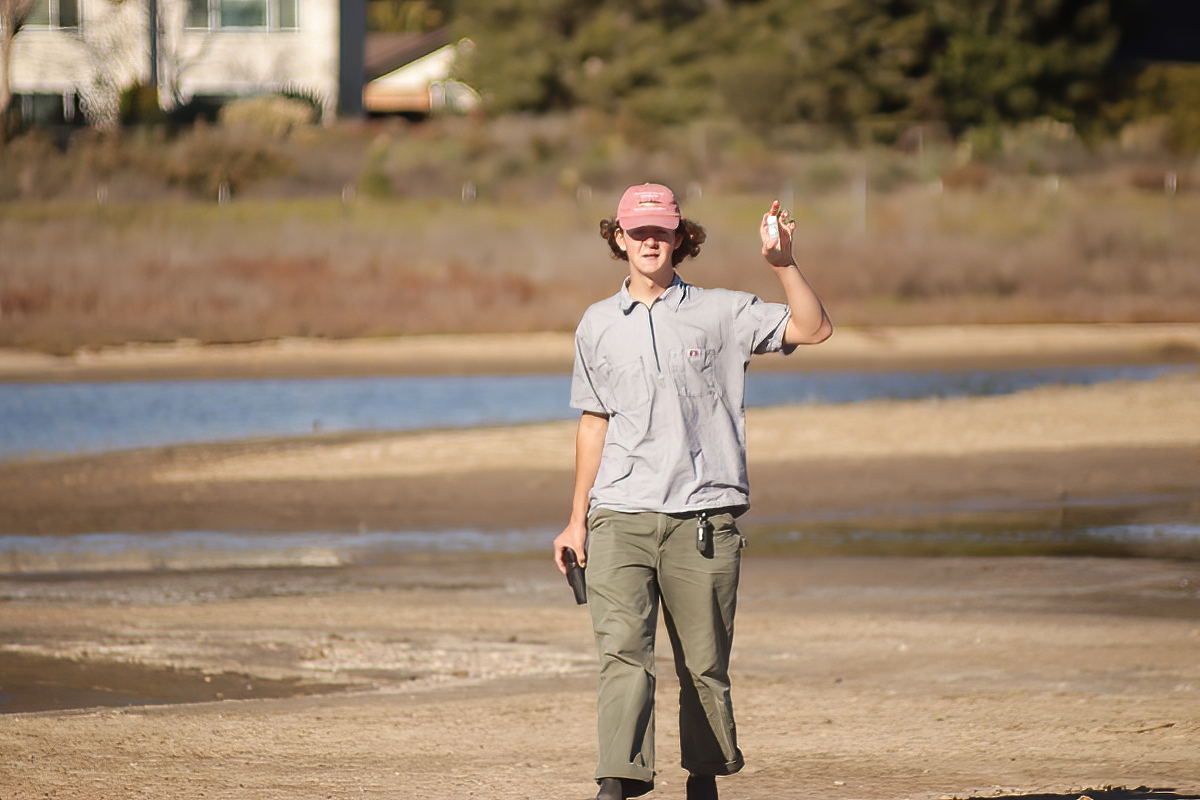 Max Laubstein is a freshman at UCSB studying biology in the College of Creative Studies. He has been birding for several years and enjoys regularly submitting his observations to eBird. Max has also done some avian fieldwork, including seabird counting in the Gulf of the Farallones and bird banding in Perú, but he's long been interested in molecular/genetic approaches to ecological research. While his opportunities to pursue this were previously limited, NCOS gave him the ability to engage in molecular-oriented fieldwork during his first quarter at UCSB. Fieldwork and schoolwork can been hard to pursue simultaneously, but the proximity of NCOS has allowed him to pursue fieldwork during the academic year. Max has been participating in an eDNA metabarcoding project which is analyzing the diets of shorebirds by searching for the genetic “fingerprints” of their prey within the birds’ feces. This project, funded by the UC Coastal Fund and The Steinmetz Foundation, has the potential to reveal information about how migratory shorebirds are interacting with the food web NCOS. Max's passion for birding led him towards phylogenetics, systematics, and related fields which use genetics to answer primarily evolutionary questions.  However, this new project at NCOS has exposed him to the idea that genetics don’t only serve a purpose in evolutionary biology, but can serve as an incredibly powerful tool for ecological research and conservation biology.

Alyssa Jain is an undergraduate researcher at UCSB who received a Schmidt Fellowship to study the E-DNA of organisms in the vernal pools on NCOS. She expressed a deep appreciation for the opportunity to engage with the environment on NCOS and has gained a greater understanding of local aquatic ecosystems through her field work and research. She especially enjoys collecting samples, as these opportunities allow her to connect with the entire ecosystem that supports the tiny organisms that she is researching in her lab work. Through her work, Alyssa has gained confidence in her ability to make positive ecological change and has been able to put into practice concepts learned in class. She is inspired by the faculty, staff, and students that she works with, and has a strengthened curiosity about the roles people can play in engaging with their local environment. Working on NCOS allows Alyssa to explore her interests of species interaction as well as ecosystem processes, all while performing important research that will lead to a greater understanding of a unique California coastal habitat.

Margherita Scussat is a local high school student at Dos Pueblos doing her senior project on the hydrology of NCOS. She has been monitoring the hydrology of NCOS for the past few years, which has given her many opportunities to engage with the plants, water systems, and wildlife of the local environment. She has noticed that the more time that she spends in the field, the more she begins to observe and appreciate the different organisms that make up the ecological community, noting her increased attention to the birds flying overhead and the variety of plant species on NCOS. Collecting meaningful data on the hydrology of NCOS makes Margherita feel empowered, not only because her research could benefit this local ecosystem but also because she is gaining skills that could be applied to large-scale projects in her future career. Her feelings of fulfillment through her work have coincided with the realization that as an individual she has the power to improve her local environment by designing an experiment to test her curiosities. Outside of her project, Margherita utilizes her proximity to NCOS to regularly walk the trails with her family, and frequently follows up her observations on site with Google searches at home that allow her to continuously build upon her knowledge of the local environment. 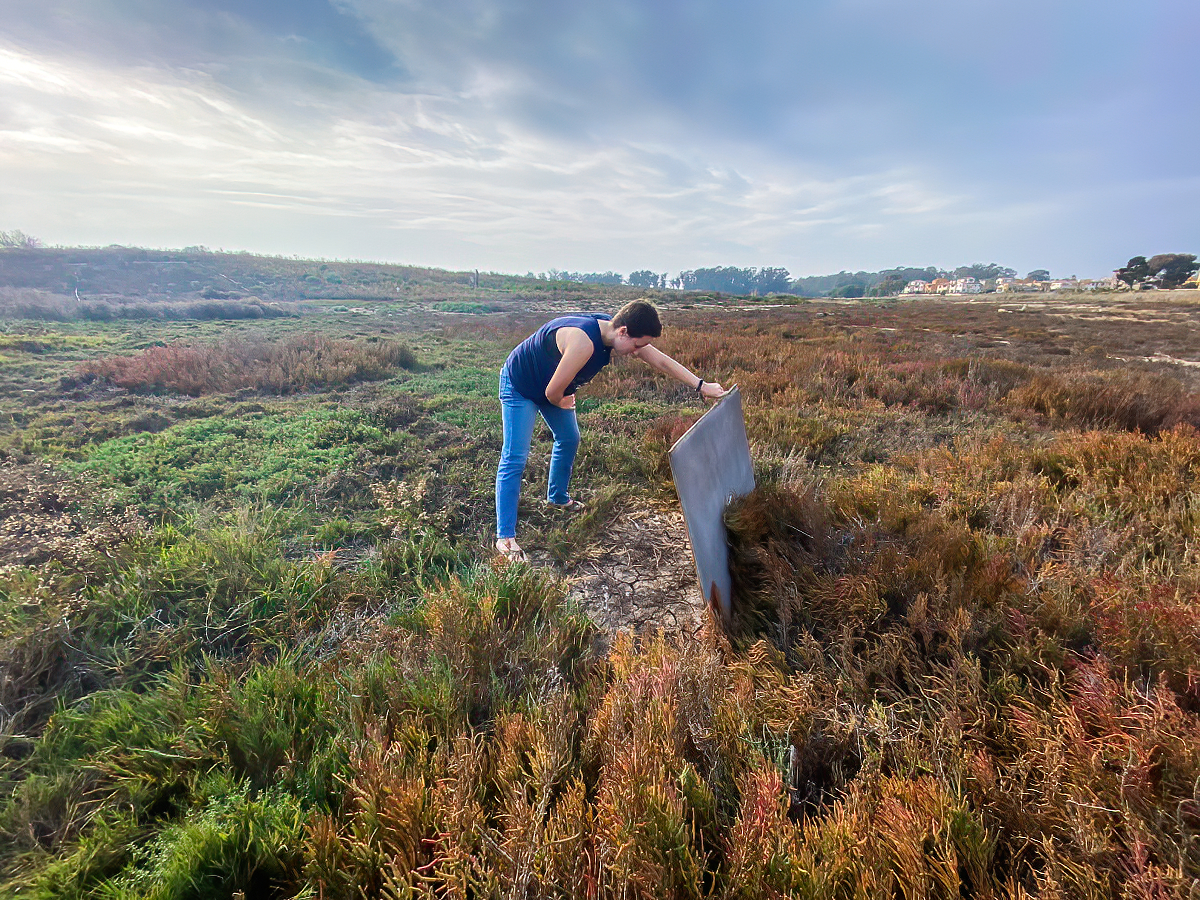 Krya Sullivan checking a coverboard in the NCOS salt marsh.

Kyra Sullivan is a senior at UCSB who is continuing the NCOS reptile monitoring project that began in October 2020. This project consists of several coverboards placed throughout the salt marsh and grassland habitats, as well as un-restored areas to the west of NCOS. These coverboards are checked weekly and all animals observed underneath are recorded along with the temperature. Kyra's monitoring experiences have greatly increased her interest not only in reptiles, but the tiny invertebrates that shelter under the coverboards and the birds that circle overhead. While Kyra's project focuses on observation and not active restoration, she has become more aware and appreciative of the hard work that goes into restoring habitats as she watches NCOS grow over time. One of her favorite aspects of conducting research at NCOS is the ability think of new research questions with ease due to being surrounded by natural spaces. In terms of the future, she says "If I had the opportunity I would love to stay out here and do research on this one little bit of land forever." Kyra's desire to study the NCOS ecosystem led her to take part in another research project where she dissects owl pellets collected from the area and prepares them for e-DNA analysis.