Unlike perennial shrubs which can persist through a range of conditions, annual wildflower species are vulnerable to seed predation, competition from annual grasses and drought conditions exacerbated by climate change. Many restoration projects achieve required native percent cover targets by planting a few relatively common species and ignore these more fragile and unpredictable species. One of CCBER’s goals has been to seek out wild populations and then nurture small populations in order to build up seed to then expand the populations under more ideal conditions. Another goal has been to try to understand what the primary threats are to specific species and how we might facilitate their success.

These annual species provide beauty and color for humans, and nectar, pollen, and seeds for a diversity of insects and birds.

There are two primary situations where we are working on this goal. The first is on the sandy loam soils of main campus and Lagoon Island where we have established thriving populations after intense prescribed burns have been used to control invasive grasses. From careful collections we have established more than 15 different wildflower species (Table 1) which are now self sustaining and dominate the seed bank. On main campus and, recently, Henley Gate area, we have been working to conserve a unique sub-species of the miniature lupine found on campus and complementing that population with other compatible annual species. These are blooming now and we highly recommend a walk around Lagoon Island on Campus Point and down to Henley Gate to catch the color! 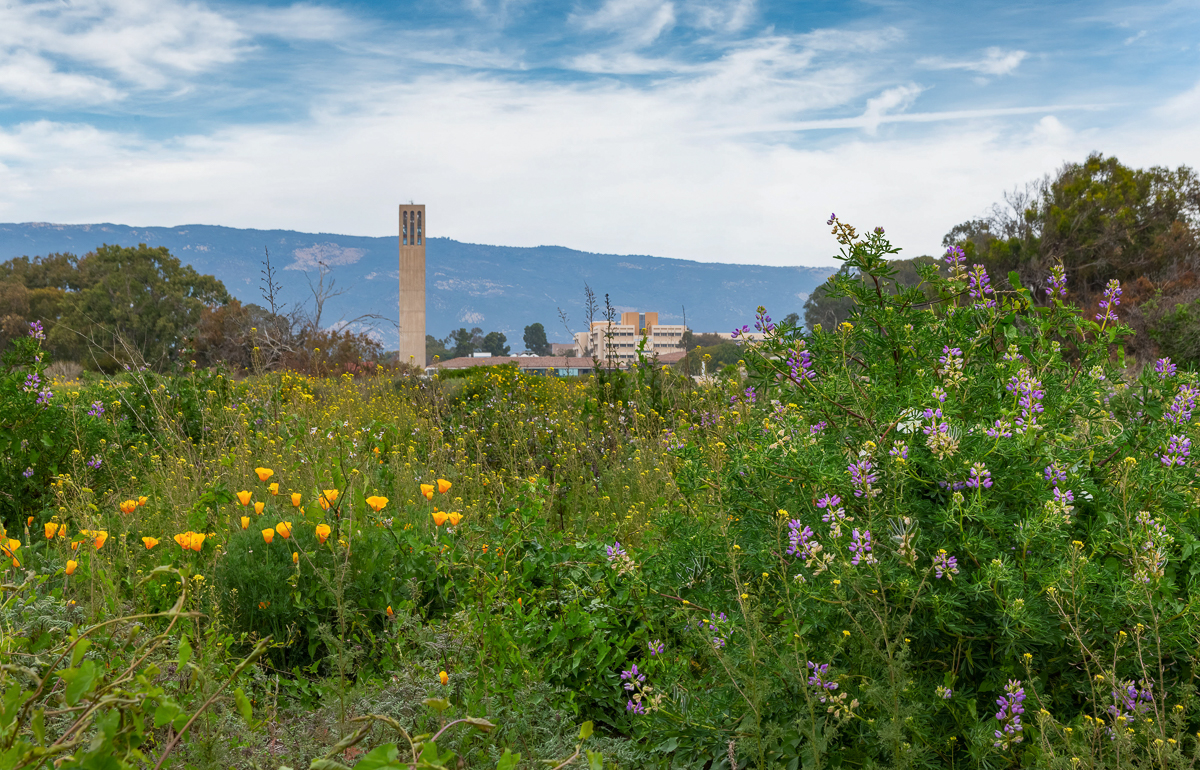 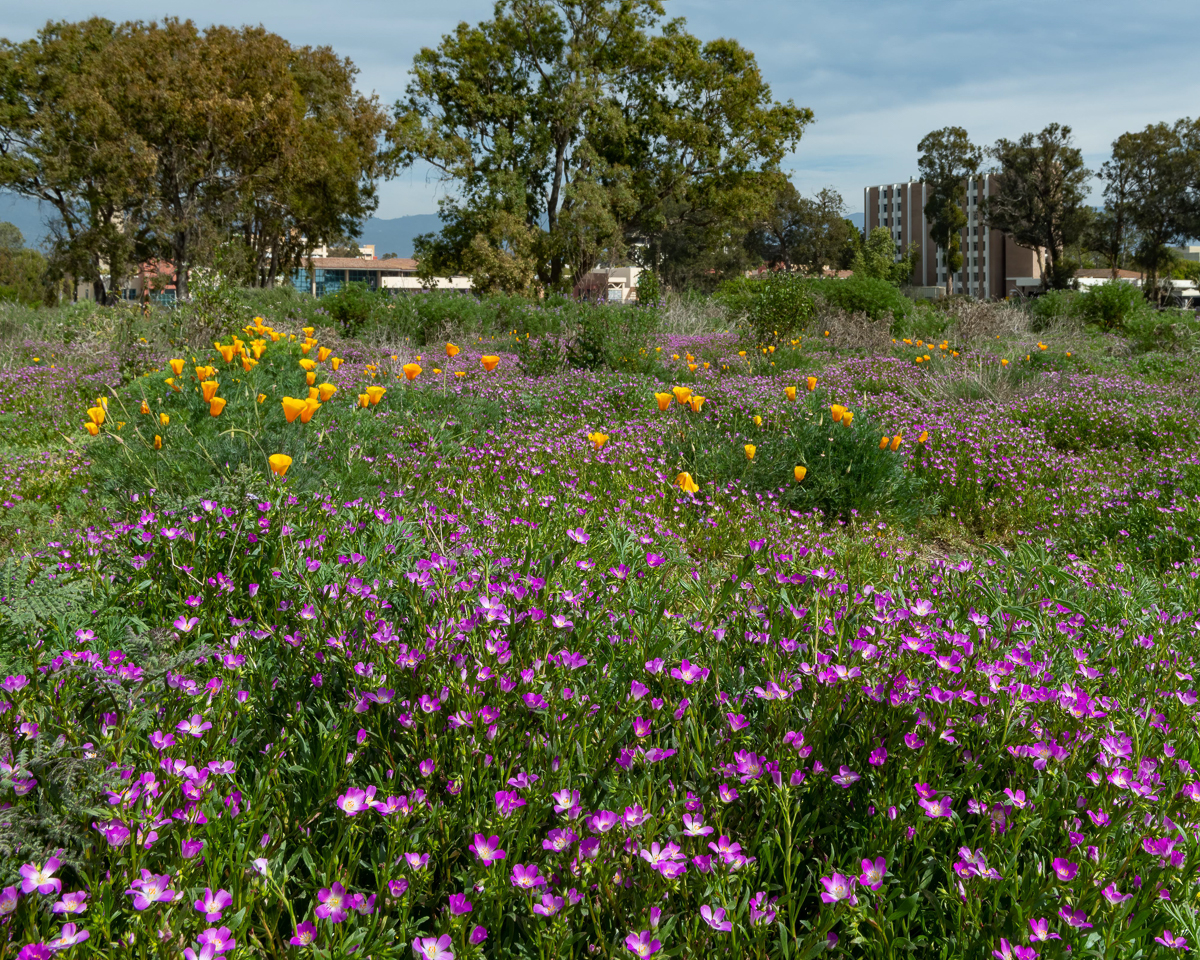 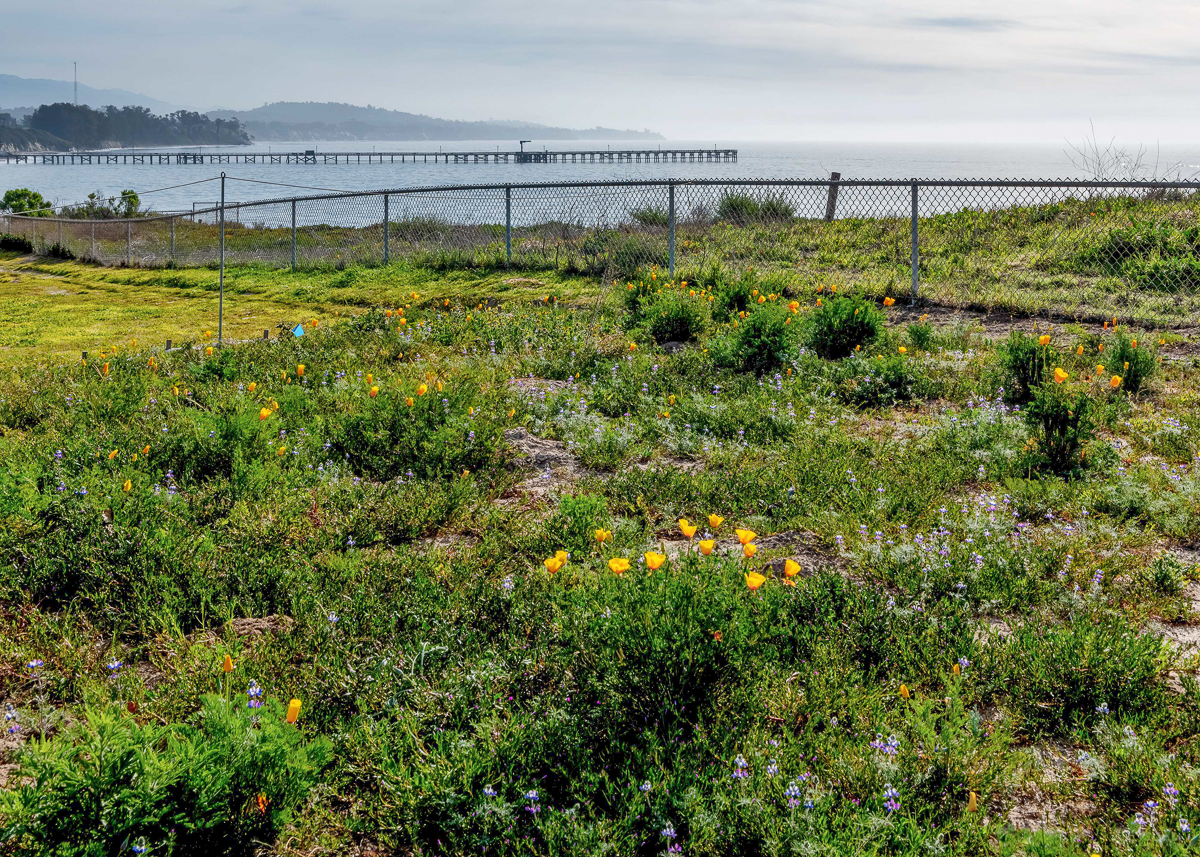 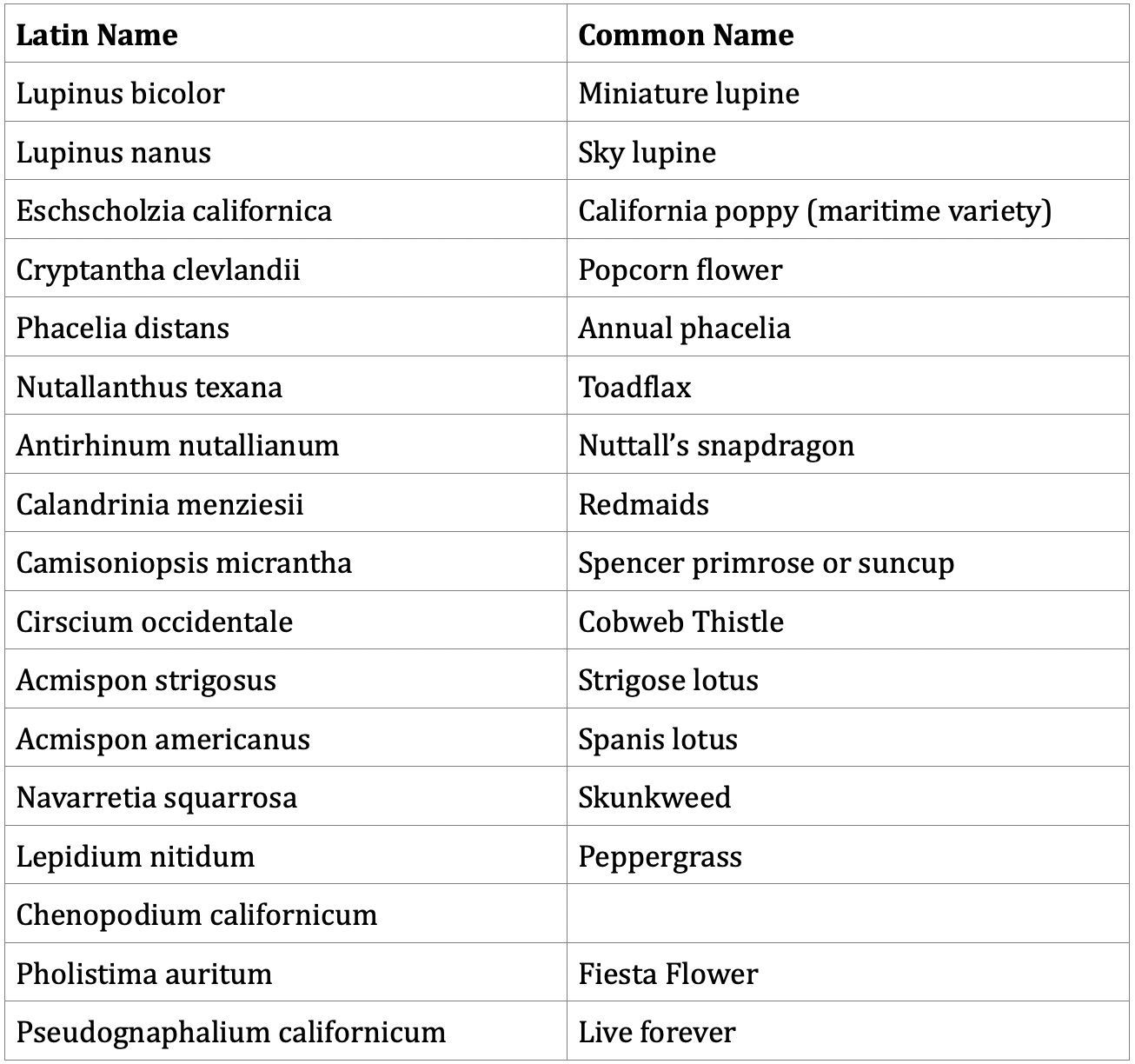 The second focus has been the North Campus Open Space Restoration Project, which is dominated primarily by low nutrient, clay soils and thus supports a different suite of species and a few isolated sandy patches with their own associated species. The vision is to integrate clay soil-associated wildflowers within the restored perennial bunch grassland and some of the sand-associated species in the sandy spots along the western edge of NCOS.  Two experimental trials were established in 2019 and several larger plots were established in 2020.  Interestingly, the planted, more robust, almost perennial flowering herbs, have been the most successful so far, but a few populations of sand-associated species such as lotus and owl's clover are persisting in the sandy experimental plot areas. This appears to be due to a mix of drought conditions, weedy competition, possible seed predation, and insect and rabbit or squirrel herbivory of germinating seedlings. 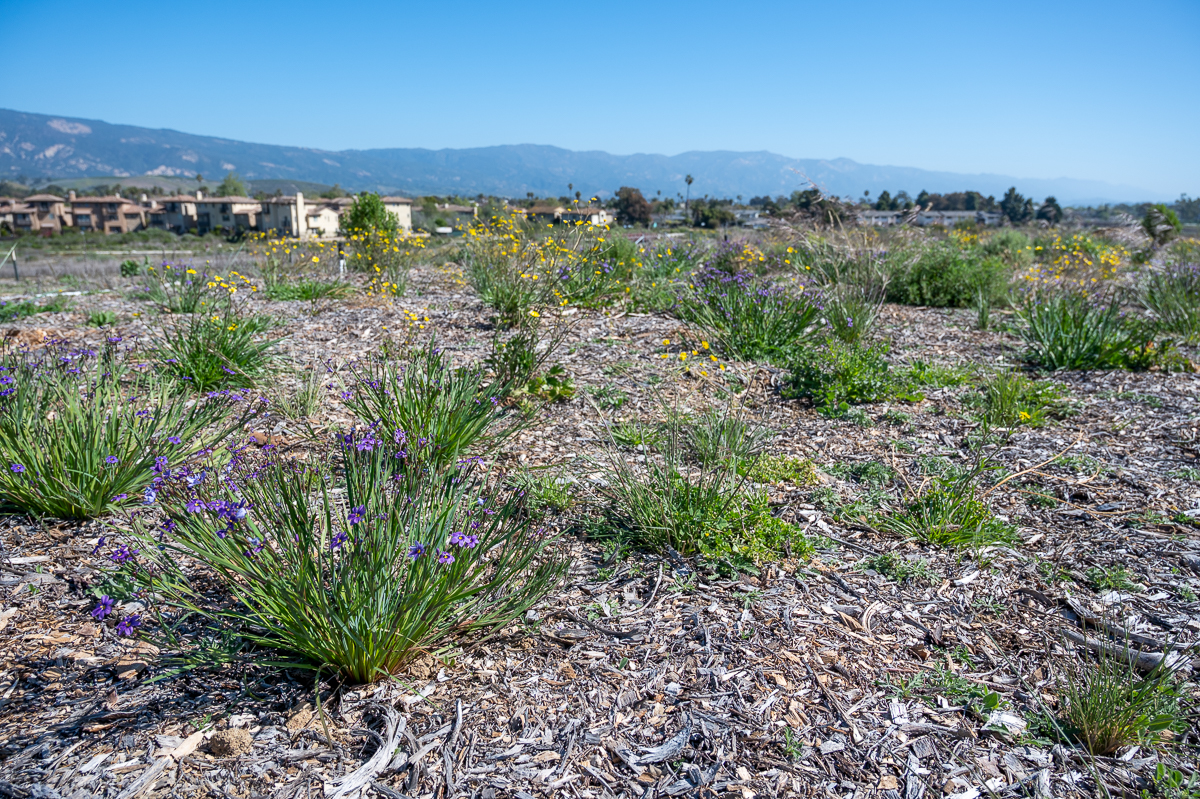 One experimental trial compared the success of planted seedlings of 7 species to spreading seeds in caged and uncaged situations to examine these possible factors. Results from that trial demonstrated that blue eyed grass (Sisyrinchium bellum) was the most successful planted seedling and that poppies, snake root, and bee plant were the least suitable for the clay soils. Buttercup (Ranunculus californicus), Cobweb thistle (Cirsium occidentale) and prairie mallow (Sidalcea malviflora) planted seedlings persisted and were only somewhat vulnerable to herbivory.  Building on these results in 2020 we grew and planted 100s of buttercup, prairie mallow (checkerbloom), poppy and blue-eyed grass and established them in irrigated plots around the grassland with the hope that these islands of wildflowers would thrive and drop seed and gradually increase in cover over the years. 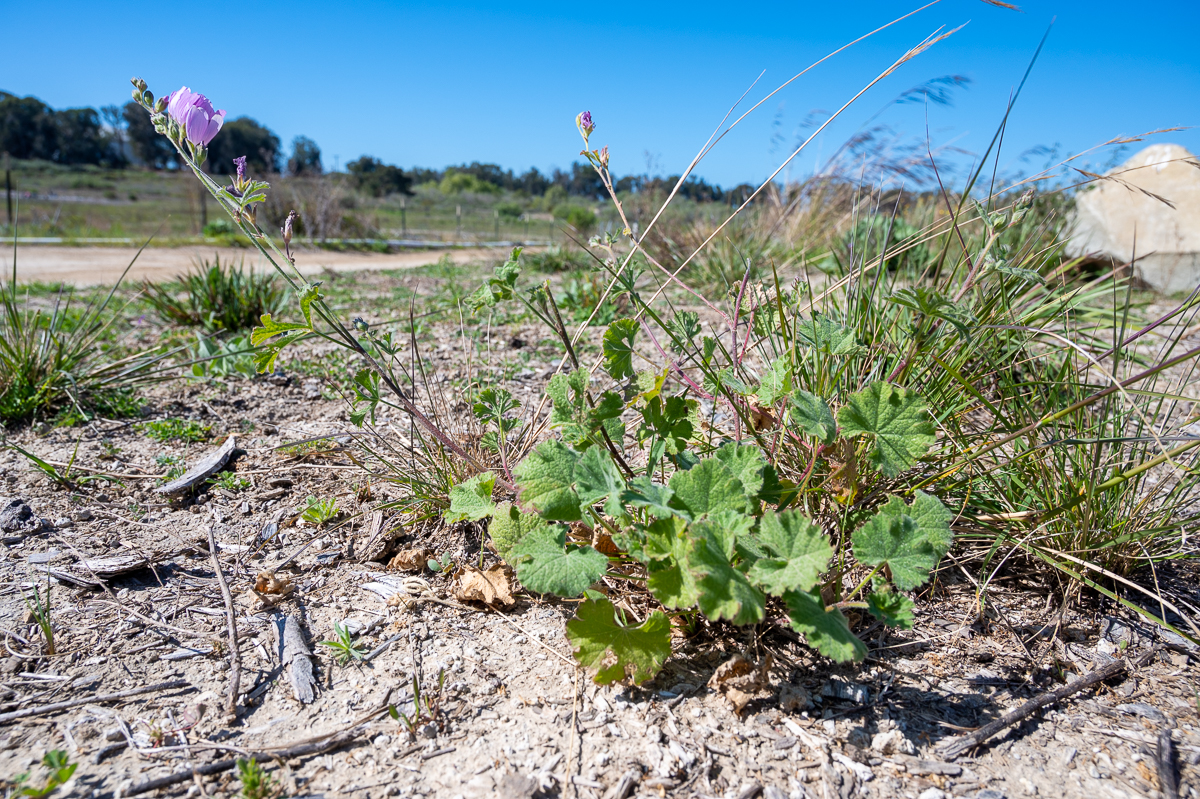 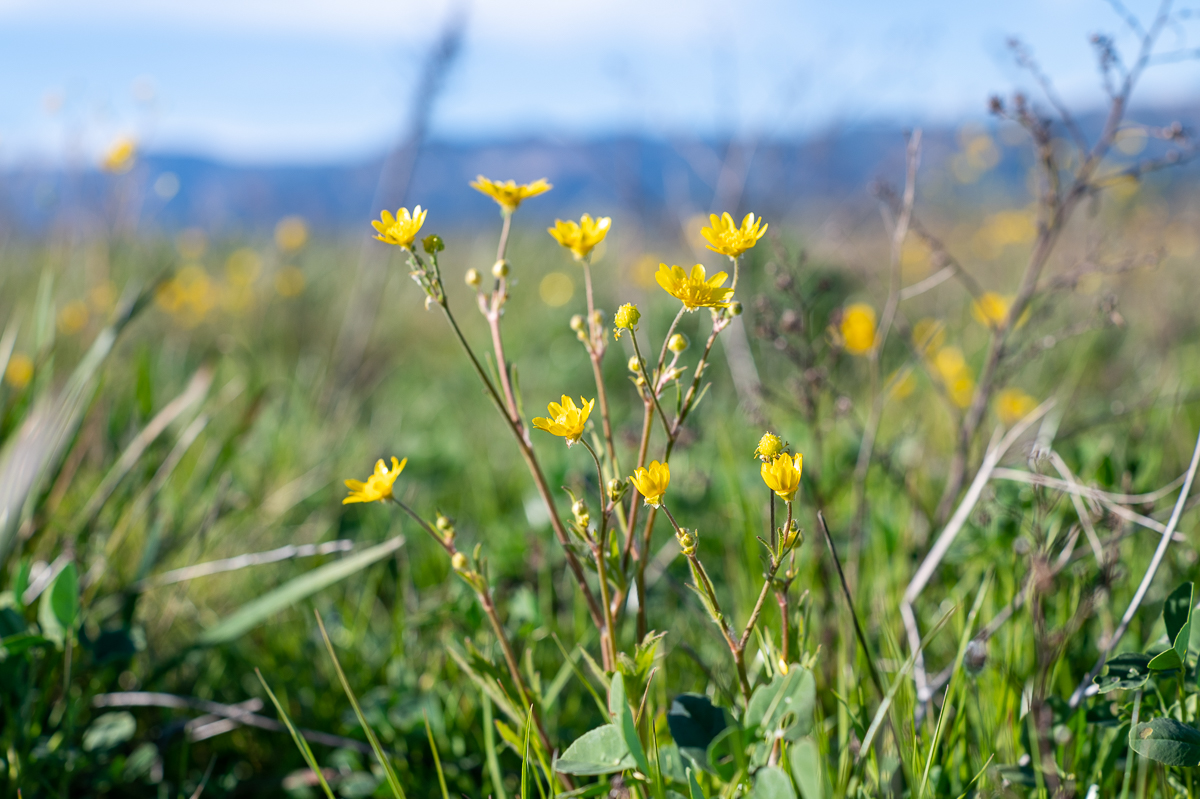 Quinn Geissow, a UCSB undergraduate monitoring the wildflower plots on the mesa, has some preliminary observations from his January monitoring that we can compare to 2021 observations. Results indicate that most of the planted seedlings persisted over two years, but we have not observed an explosion of seedlings from those parent plants in the second year of monitoring. Poppies and Buttercups appear to be the most vulnerable to herbivory (see Figure 2). It takes thousands of seeds to produce just a few plants in the wild with all the pressures on them and we expect with continued care to see natural regeneration of these important components to the diversity of coastal Santa Barbara. The beautiful Owl's clover below is a species we are particularly proud of getting established because it is a hemi-parasitic plant requiring a host to grow. Poppies and mallow declined by 100% and 50% respectively between 2021 and January 2022, and buttercup and blue-eyed grass declined by 20% each. No new seedlings of any of the species were observed this year. The dry conditions last winter and this winter may have contributed to this decline, but increased cover by non-native annual grasses from 25% to 45% may also be contributing to the decline. 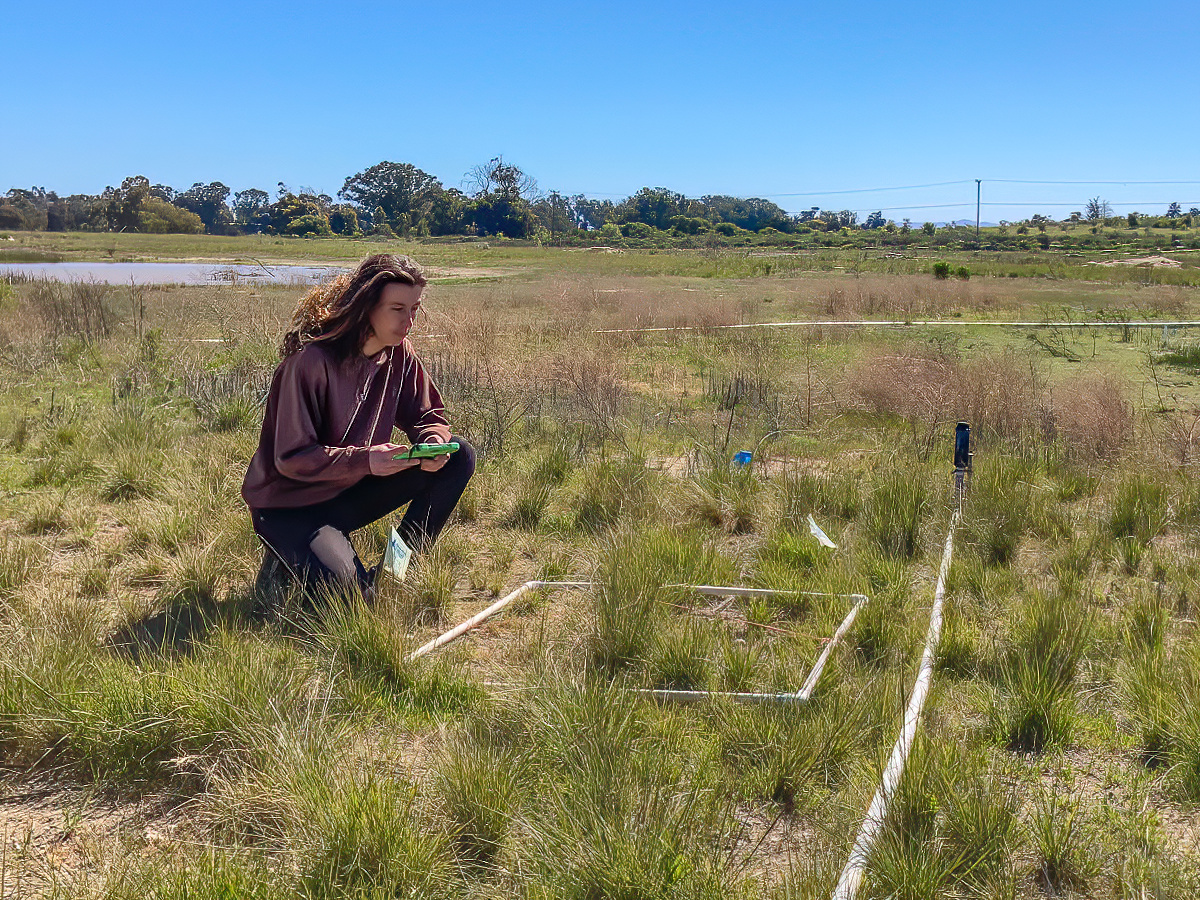 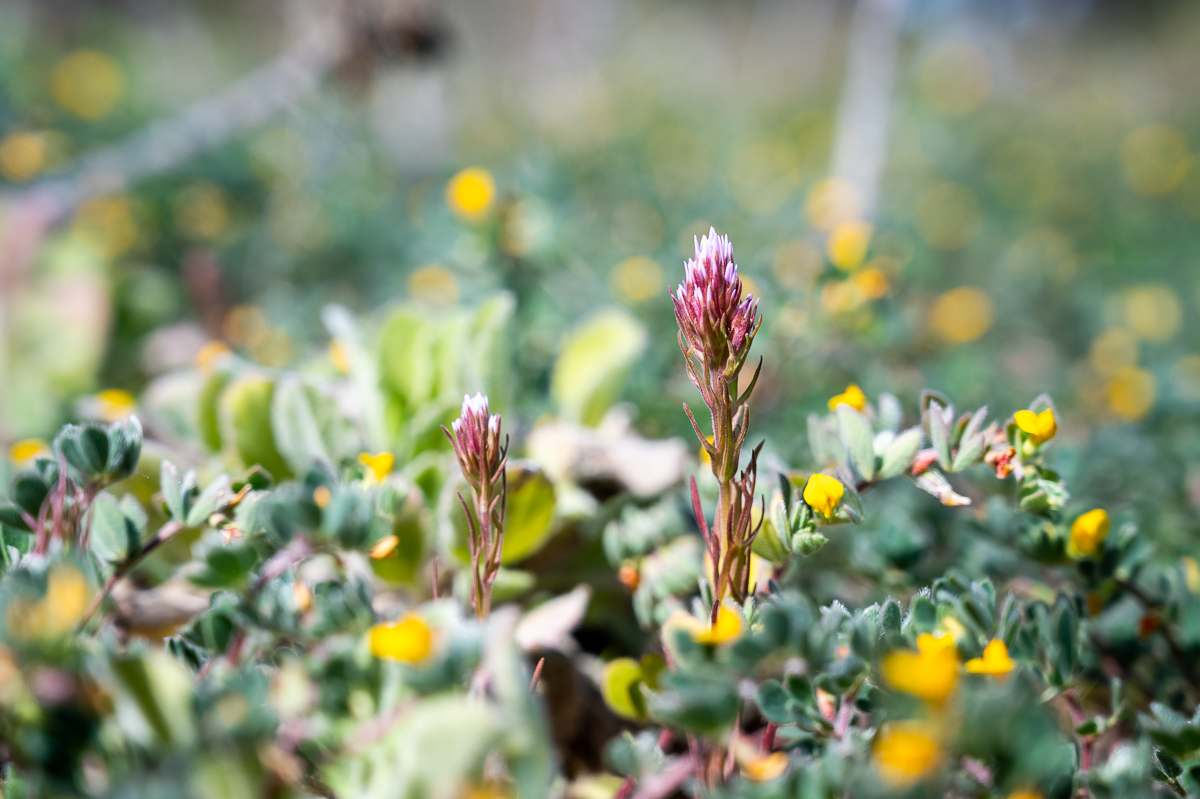 Owl's Clover (Castilleja densiflora) and Acmispon wrangelianus grow well in the sandy spots along the western edge of NCOS. 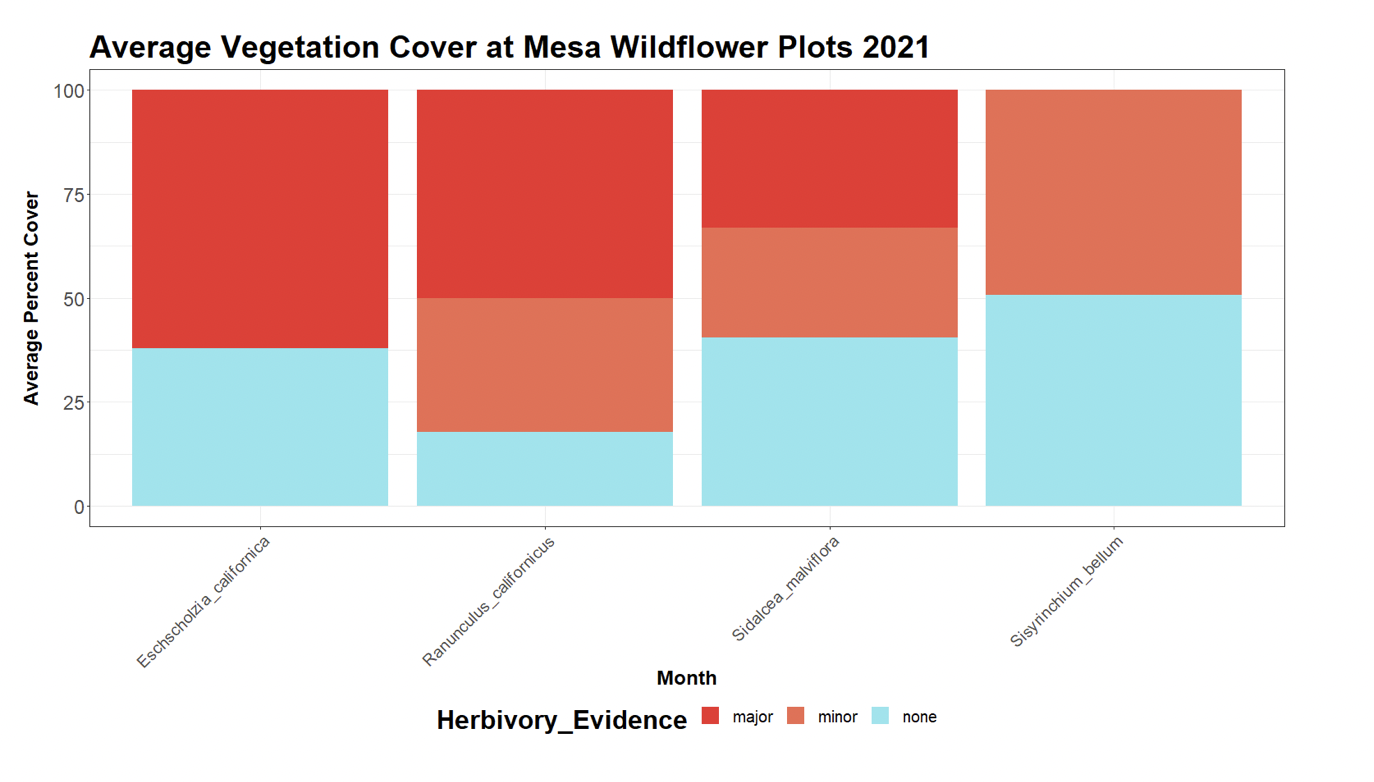