Stories from Year 3 of Vegetation Monitoring at NCOS

This summer, CCBER conducted the 3rd year of vegetation monitoring at the North Campus Open Space restoration project. This monitoring is vital as it formally tracks the progress towards our restoration goals and can provide insights to guide our focus moving forward.

The progress of the restoration on a whole, in terms of growth and establishment of vegetation cover, has been easily visible. We have a photographic record of the development of NCOS that documents this and can be accessed here. However, to ensure we are meeting or progressing towards the specific goals that were set out in the restoration plan for each plant community or habitat type, we need to zoom in and look at the details on the ground. That is why we developed a comprehensive monitoring program that collects detailed data on the types and coverage of native and non-native species. With three years of this data, we can now see more clearly how the restoration is progressing, and where more work or a change in management may be needed. Here we report on some of this year’s data and what it is telling us. The complete set of monitoring data will be available in the Year 3 Monitoring Report.

At nearly 40 acres, the salt marsh and transition habitats (olive and lime green areas in the map above), are the most extensive plant communities on NCOS. Planting in the first year of the project was primarily focused on these habitats, with dominant species being Pickleweed (Salicornia pacifica), Salt grass (Distichlis spicata), Alaklii heath (Frankenia salina), and four others. Fortunately, these hardy, salt and drought tolerant plants did not need much help to establish and spread. As a result, the goal of 40% cover of native vegetation by year 2 was achieved, and the year 3 data shows continued expansion in coverage (Figure 2 below). We are also monitoring vegetation cover in the small remnant salt marsh at the western end of the site, which serves as a reference for what we expect the native cover of most of the restored salt marsh to reach. The goals for native species diversity in these two habitats are being far exceeded, which is in part due to how the slope of the wetland was carefully constructed to accommodate a range of flood regimes and specific niches for the different species. Pickleweed can handle regular flooding, but Parish’s glasswort (Arthrocnemum subterminale), for example (which looks quite similar to Pickleweed), only grows at the upper edge of the salt marsh. We are currently working with the USFWS to investigate the potential for supporting a population of the endangered Salt Marsh Bird’s Beak (Chloropyron maritimum ssp. maritimum) on the site. The success of the Ventura Marsh Milk-vetch (Astragalus pycnostachyus var. lanosissimus) establishment gives us hope that the diversity of habitat niches created at NCOS will allow this site to serve as an important refuge for rare plants and animals.

Figure 2. Bar chart of the mean absolute native and non-native vegetation cover (including standard errors) from three years of monitoring of the Restored Salt Marsh, Transition/High Salt Marsh, and Remnant Salt Marsh at North Campus Open Space. Number of plant species recorded are above the bars. 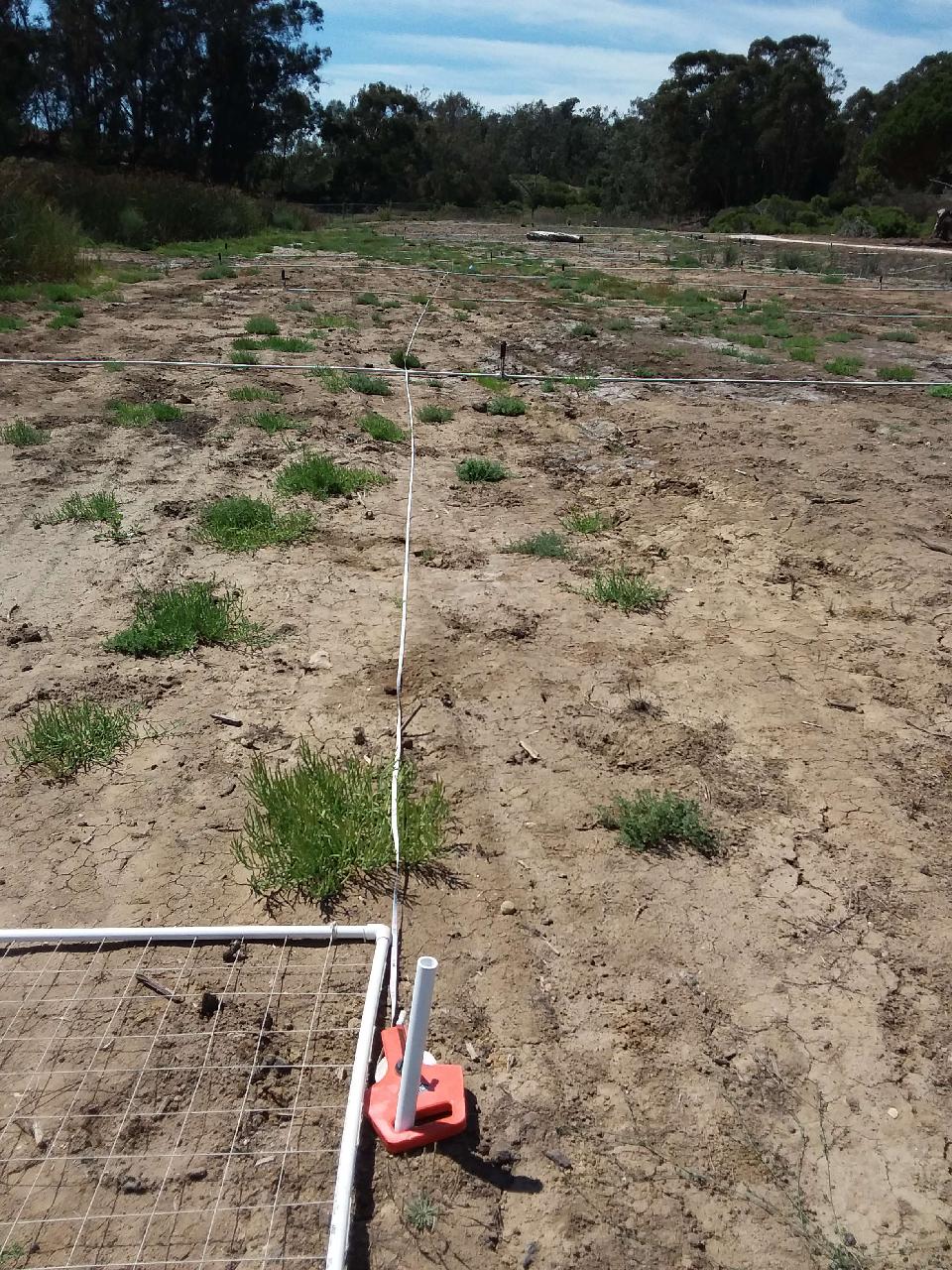 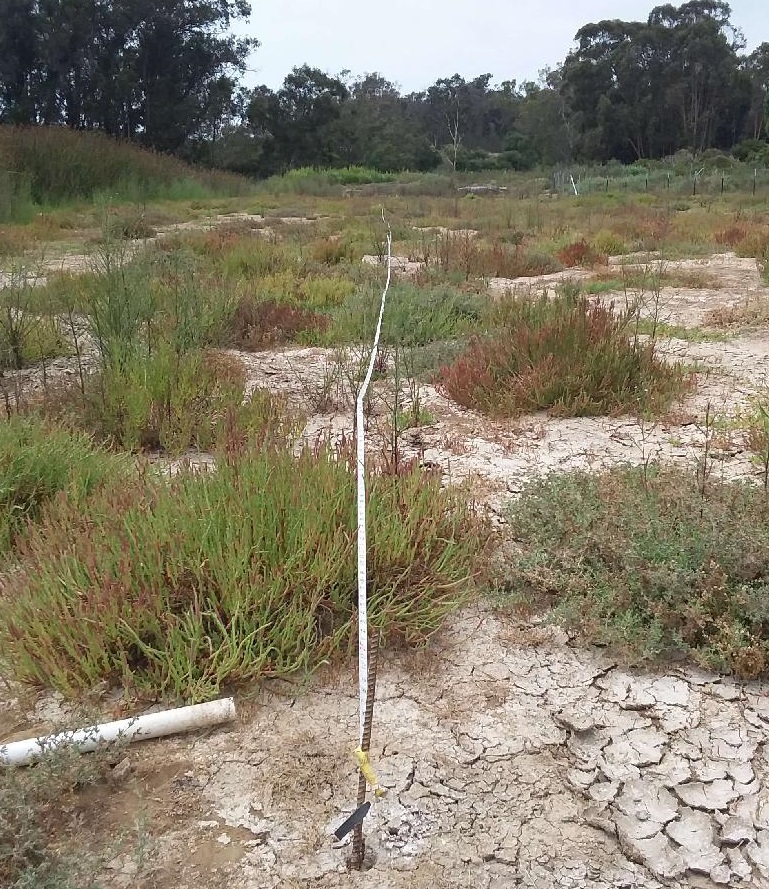 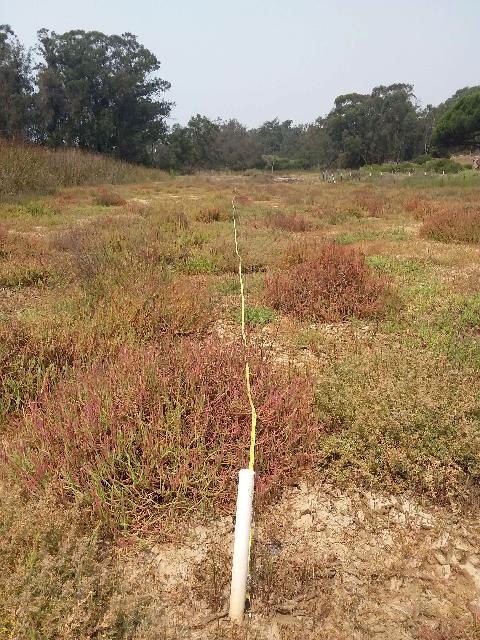 In the first year of monitoring, only about one-third of the perennial grassland (area with diagonal magenta stripes in the map in Figure 1) on the NCOS Mesa had been seeded with Purple Needle grass (Stipa pulchra). The remainder of the grassland was seeded in late 2018, and while most of the seed sprouted successfully, the first two years of growth did not cover much ground. This clearly changed over the third year of the project, as indicated both in the monitoring data and photos (Figures 4 and 5 below). Now that the dominant species, Stipa pulchra, is established and most invasive plants are under control, we are beginning to work on adding diversity with annual flowering forbs and herbs, such as Miniature lupine (Lupinus bicolor), Owl’s clover (Castilleja densiflora), Buttercup (Ranunculus californicus), Checkerbloom (Sidalcea malviflora), Western thistle (Cirsium occidentale), Blue-eyed grass (Sisyrinchium bellum), and California poppies (Eschscholzia californica). We conducted experimental plantings of some of these species in plots on the Mesa last winter and spring to determine the most effective strategy for establishing diversity in the grassland (read more about that here). In next year’s data (year 4 of the project), we expect to see greater diversity as well as a further increase in native cover within the Mesa grassland.

Figure 4. Bar chart of the mean absolute native and non-native vegetation cover (including standard errors) from three years of monitoring of the restored Perennial Grassland at North Campus Open Space. Number of plant species recorded are above the bars. 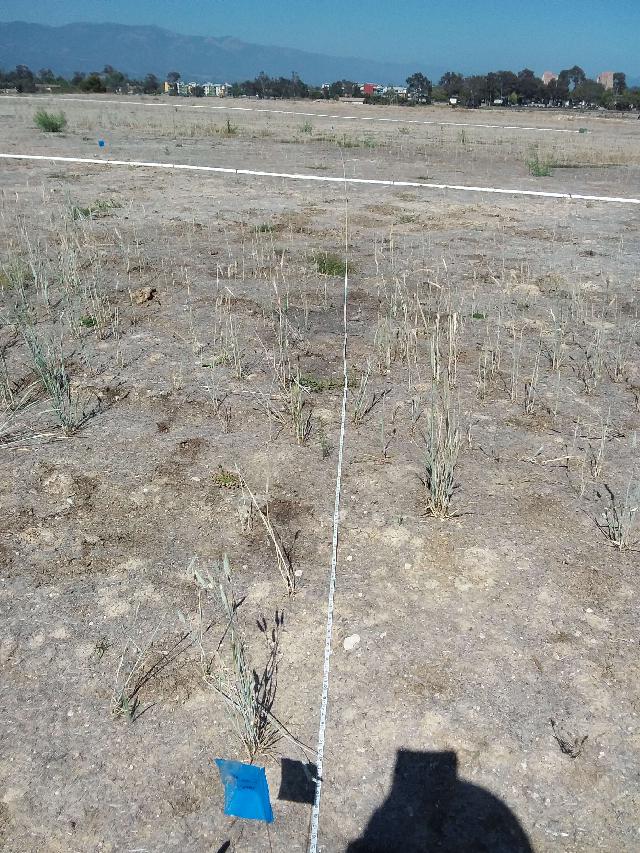 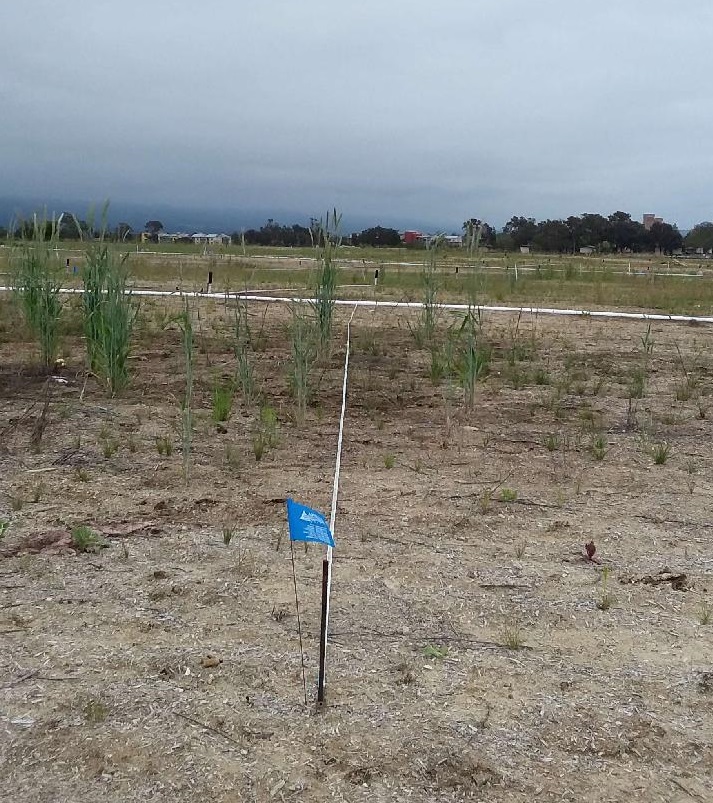 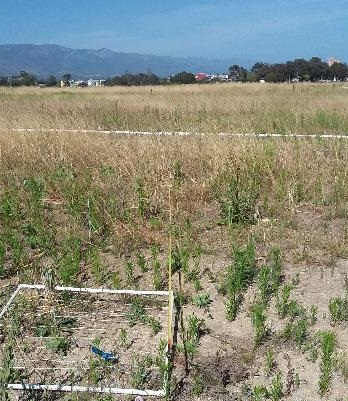 The Peripheral Uplands (light yellow areas in the map in Figure 1) comprise narrow areas along the northern and eastern periphery of the NCOS project, and they are some of the most diverse and challenging habitats to restore. The high diversity comes from these areas being a mixture of grassland, coastal sage scrub, and wetland species as well as a couple of areas where non-native trees were retained. Some of the challenges of restoration along the periphery include: delays in planting along the eastern side due to the pending Ocean Meadows housing development adjacent to that area, a remnant non-native dominated seed bank in the soil, and the close proximity to non-native dominated areas means these habitats are one of the first places where non-native seeds can try to settle and establish. These challenges mean that we have not quite met the first native vegetation cover goal for the Peripheral Uplands as a whole, and the percentage of non-natives remains high. But if we look at the data for each of the seven monitoring transects (Figure 6), we can see that restoration is progressing well and some of the native cover goals are being met in the parts of the habitat where we have been able to plant and control weeds since the start of the project – mainly the central-northern periphery (transects PU-03 and PU-04 - photos of the latter in Figure 7). We expect further progress in the north-western periphery (transects PU-02, PU-05 and PU-06) this coming year, while the eastern periphery may have to wait until the housing development is constructed.

Figure 6. Bar chart of the mean absolute native and non-native vegetation cover (including standard errors) from the 2020 monitoring of seven transects in the Peripheral Uplands at North Campus Open Space. Number of plant species recorded are above the bars. 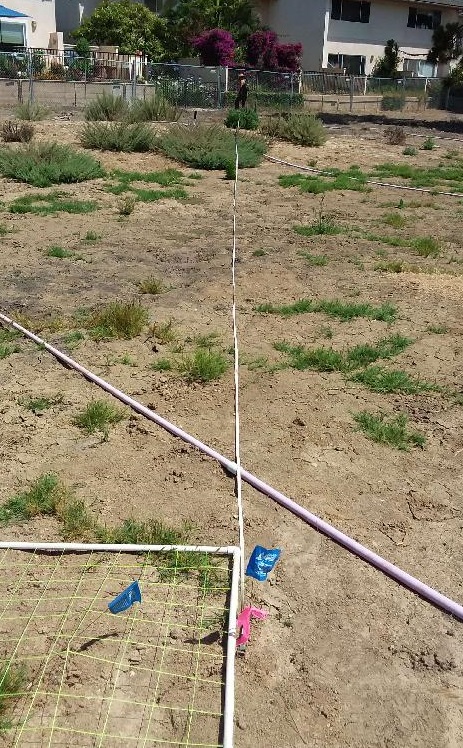 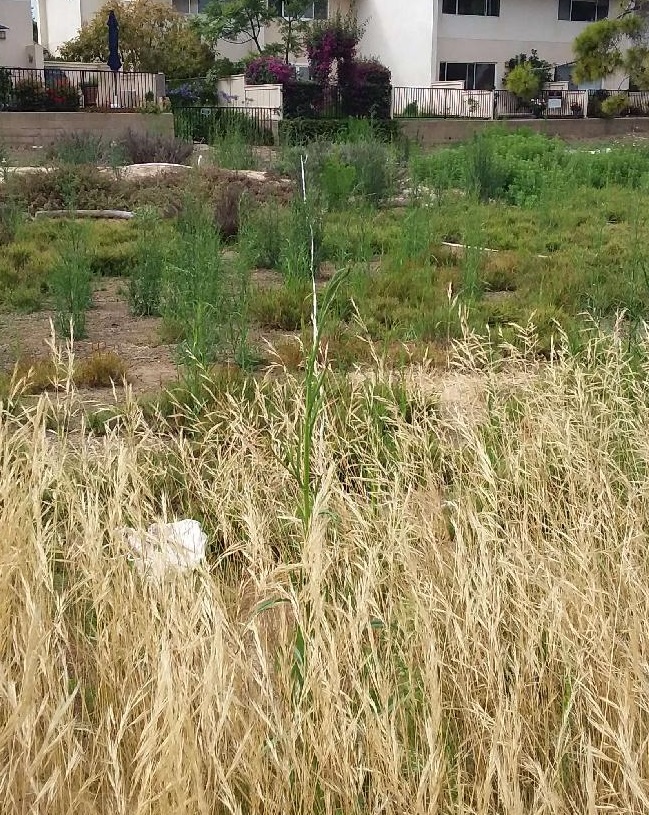 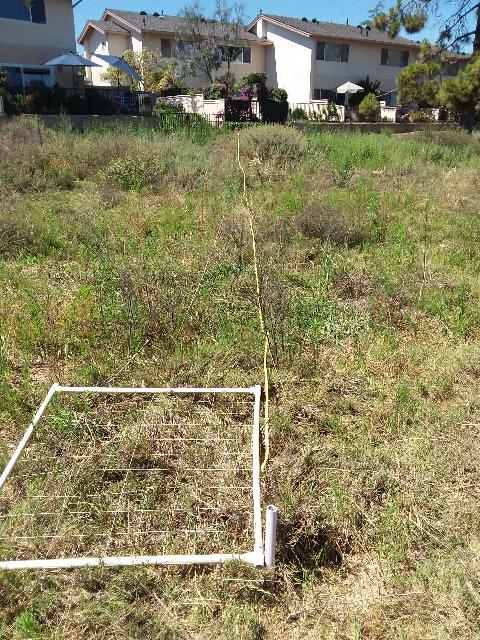 The last major habitat to be planted at NCOS was the Coastal Sage Scrub/Chaparral mosaic (CSS Mosaic) on the northern and eastern slopes of the Mesa (sage green area in the map in Figure 1). The initial planting here was conducted last fall and winter, while copses of Coast live oaks (Quercus agrifolia) have been installed since late 2018 (darker green blobs within the sage green area in Figure 1). While we are in the third full year of the restoration project, this is really only the first full year of restoration of the CSS Mosaic habitat, and this is clearly reflected in the monitoring data (Figure 8). In this habitat we measure the coverage of the canopy (vegetation above 2 meters in height) and sub-canopy (vegetation below 2 meters) separately. The oaks are not yet tall enough to be considered canopy vegetation, so all of the data reported is for the sub-canopy. This year’s data shows a good amount of native coverage that even exceeds the 3rd year goal for this habitat (Figure 8). However, the caveat is that it is largely dominated by one species, Symphyotrichum subulatum (see 3rd photo on the right in Figure 9). This native annual forb established on its own and is why much of the Mesa slopes currently look like they are covered in drab, dead vegetation this time of year. While it is a ruderal (weedy) species, it provides several functions to the site. For example, it produces copious small seeds adored by sparrows and finches, and the roots of these many colonizers are helping to improve the dense, nutrient-poor clay soils by creating pore holes for water and air infiltration, and leaving behind organic matter (roots and carbon-rich root exudate and mycorrhizal fungi networks). All of this will help the natural ecosystem functions and soil structure to develop and support the other, slower growing shrub species.

Figure 8. Bar chart of the mean absolute native and non-native subcanopy vegetation cover (including standard errors) from three years of monitoring of the restored Coastal Sage Scrub/Chaparral Mosaic at North Campus Open Space. Number of plant species recorded are above the bars. 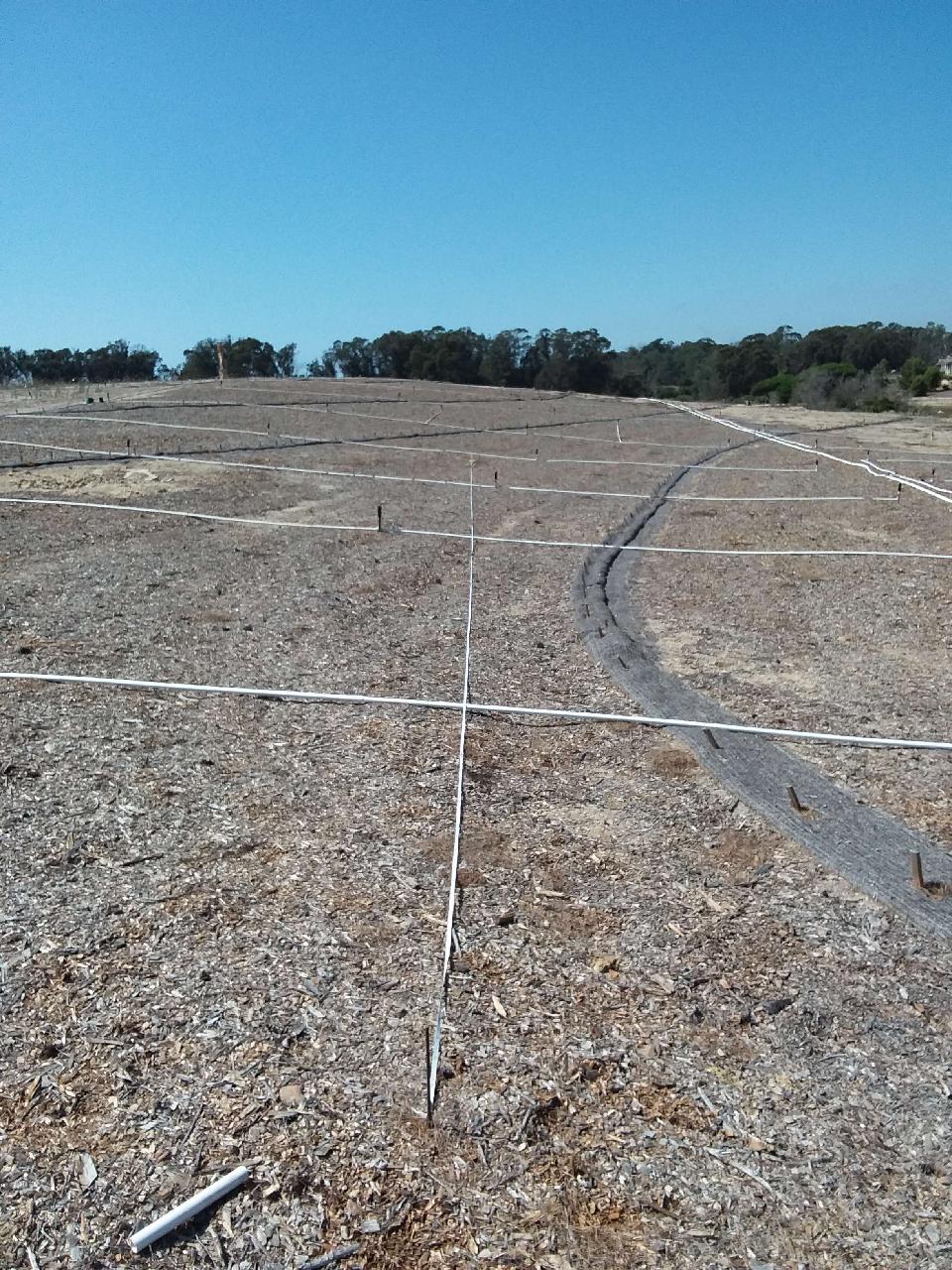 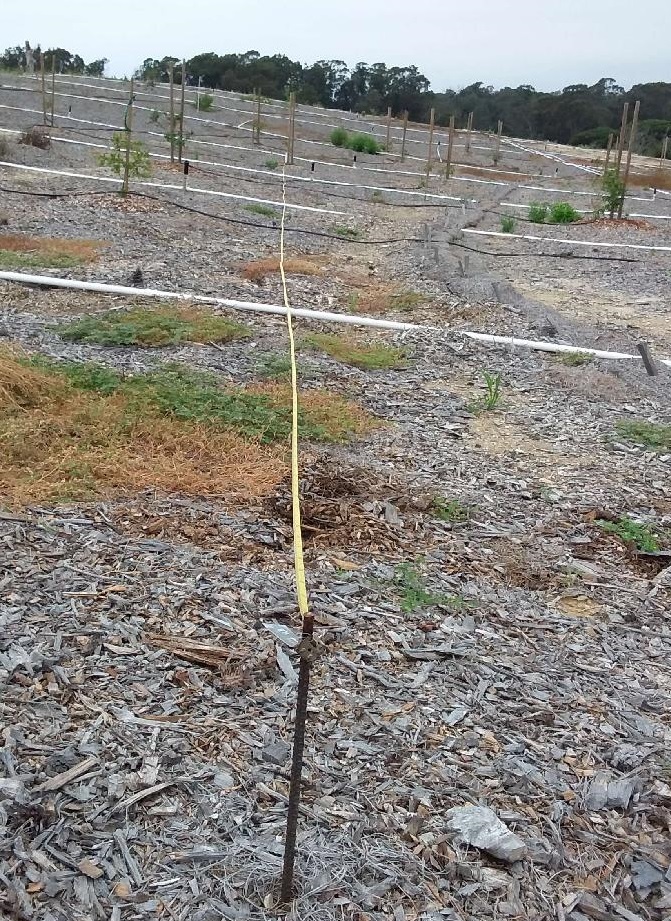 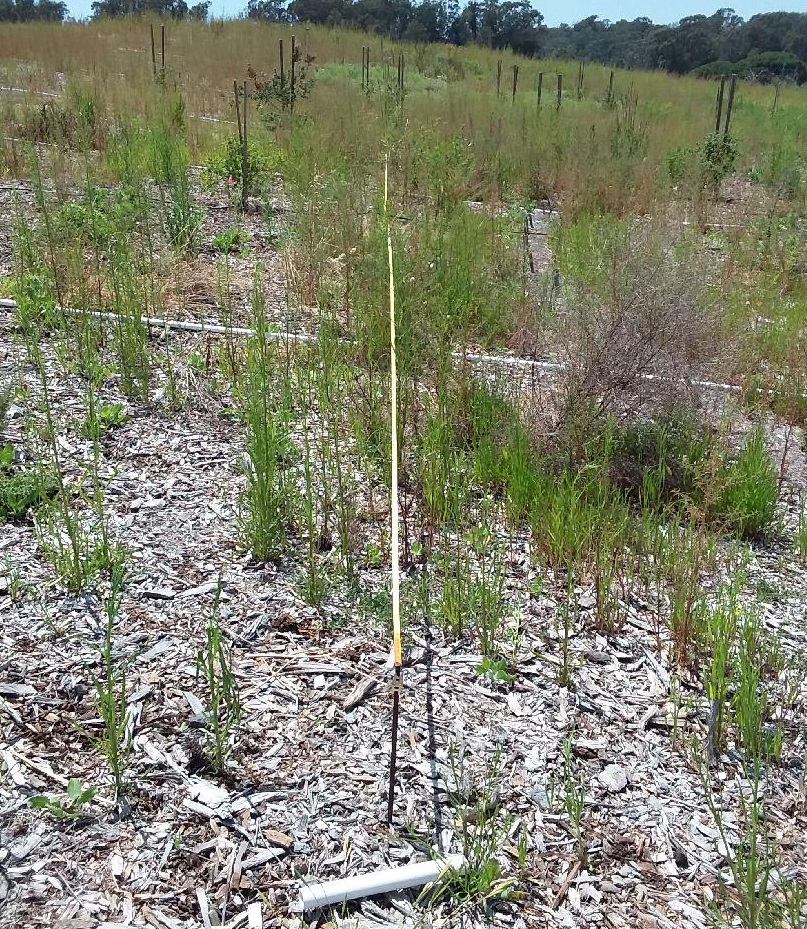