When you gaze out on the mesa at the North Campus Open Space (NCOS), you might notice that the grassland is occasionally dotted by small mounds of mostly concrete rubble. Why are these structures there and what role do they play in the restoration process? These structures are artificial refugia, also known as hibernacula, and their purpose is to provide places of refuge for small terrestrial vertebrates, which was particularly important at the early stage of restoration when the site consisted largely of bare ground with very few places that offered shelter. In this post from June 2017, we described the construction of a hibernaculum and their purpose, along with other features for supporting wildlife habitat at an early stage of the restoration

If you watch a hibernaculum on the NCOS mesa for a while, you might notice ground squirrels darting in and out of it, or even a burrowing owl hiding in one of the crevices. These anecdotal observations inspired UCSB undergraduate student, Alistair Dobson, to develop a research project to systematically assess the diversity and behavior of wildlife associated with these hibernacula, mainly through the use of motion-detecting cameras. 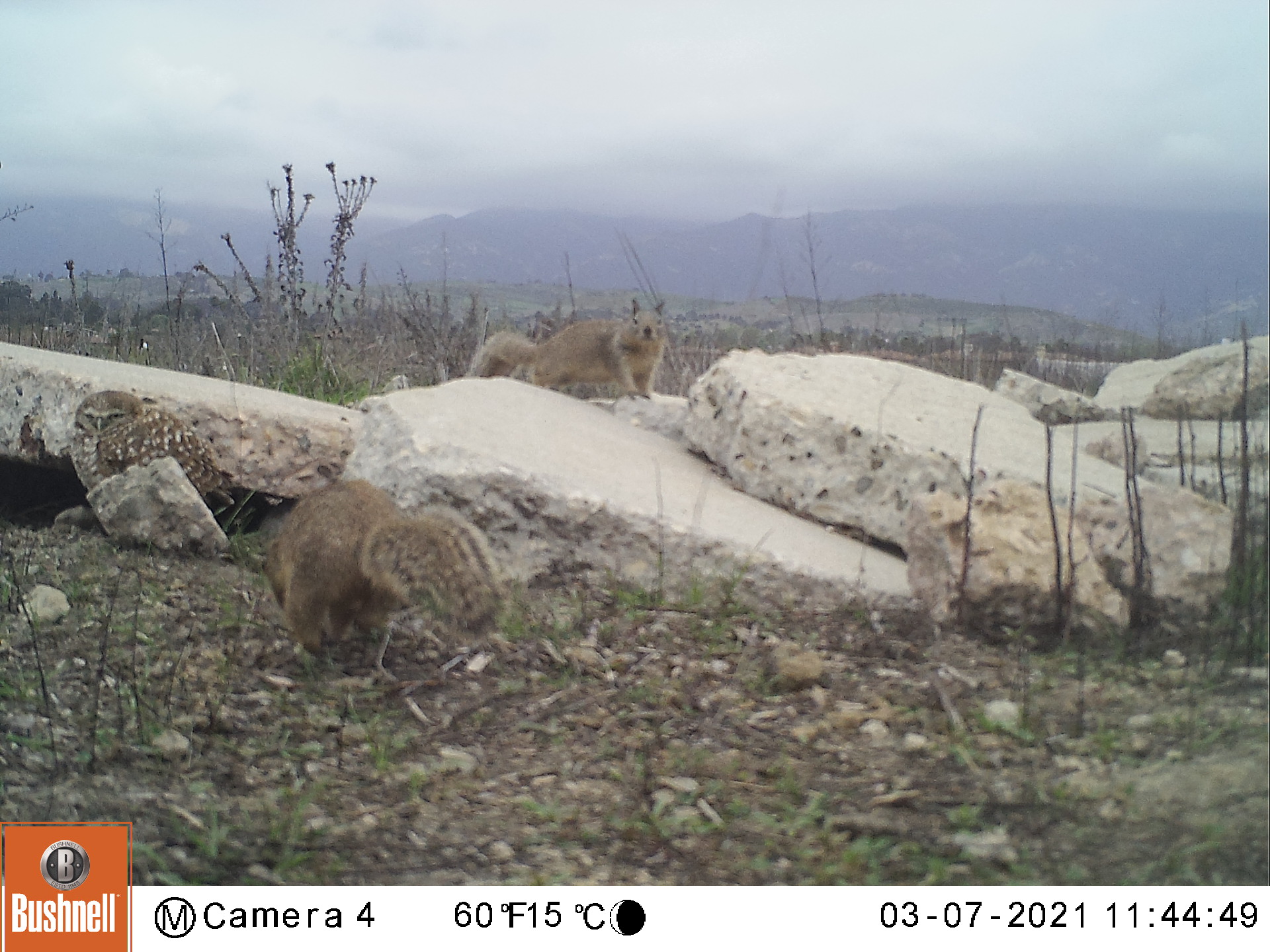 In the photo above, a Burrowing Owl can be seen on the left side, next to an entrance into a hibernacula that two California Ground Squirrels also appear to be using!

With an Undergraduate Research and Creative Activities Grant (URCA), a donation of 14 Bushnell cameras from the Douglas McCauley lab, and the assistance of Seth Frazer, Mark Asch, and CCBER staff and equipment, Alistair deployed cameras at 36 hibernacula throughout February and March of 2021. As employed student workers with CCBER, Alistair and his team followed campus COVID safety protocols during the study. With more than 80,000 images recorded, the results from this period are still being processed, but we do have some initial findings to share, including some exciting firsts for NCOS! 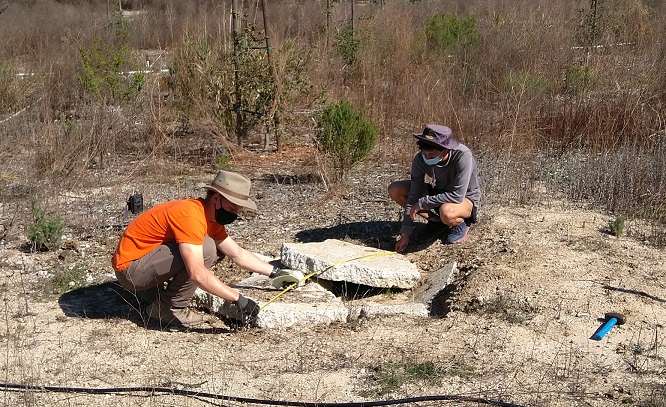 Activities in and around the hibernacula tend to vary between day and night. In the daytime we most commonly observe California Ground Squirrels and Western Fence lizards using the hibernacula. Ground Squirrels can be loosely termed as “ecosystem engineers” for our restoration site due to their ability to make habitat for other species by digging networks of tunnels. We’ve seen a number of species entering and exiting these tunnels including garter snakes, burrowing owls, brush rabbits, and deer mice. The hibernacula serve as lookout points for these squirrels, which stand on top of them before sounding a chirping alarm and running back into the tunnels within the hibernacula for safety. We believe the squirrels use these hibernacula extensively as focal entrances to their underground network of tunnels. 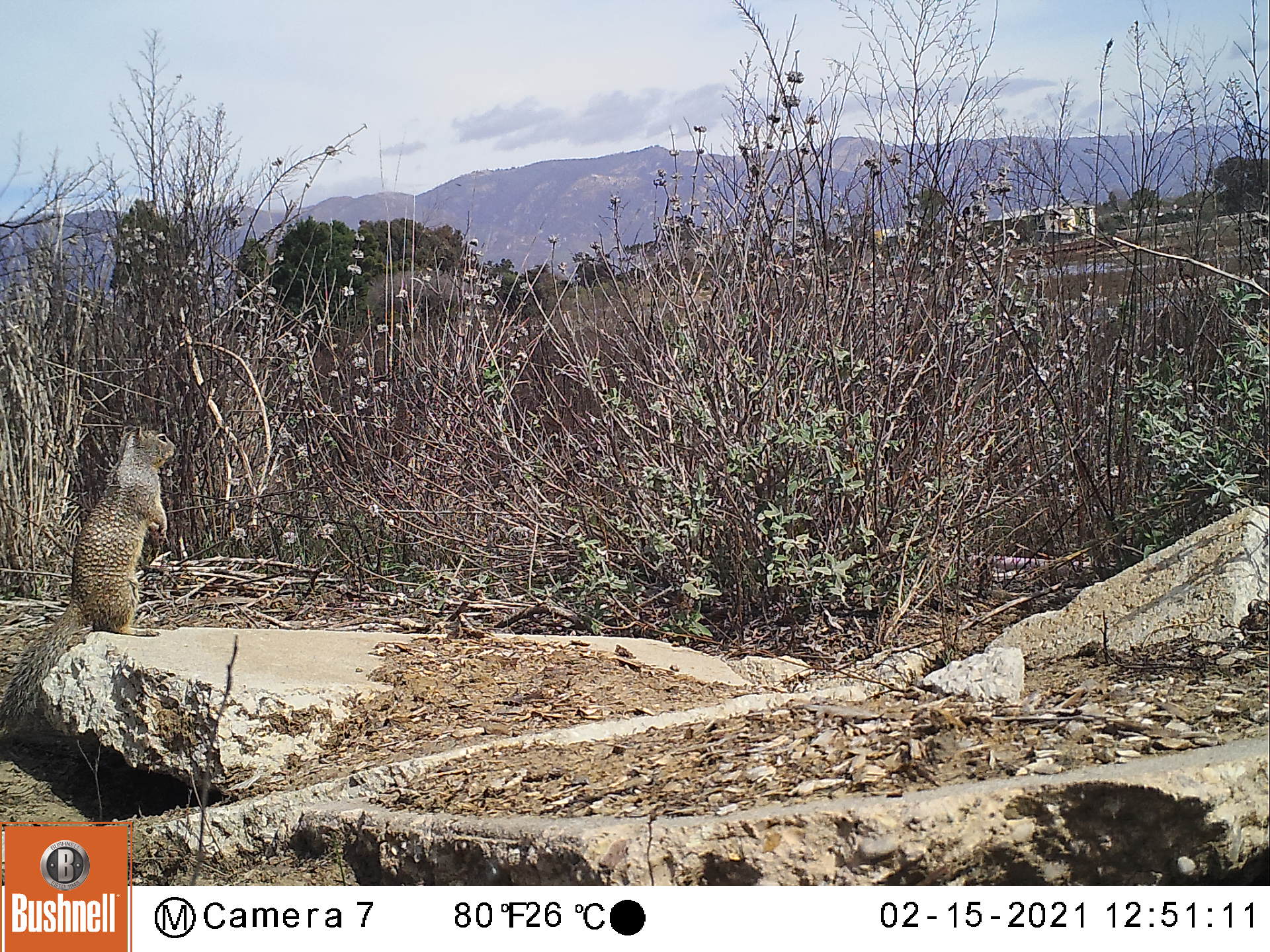 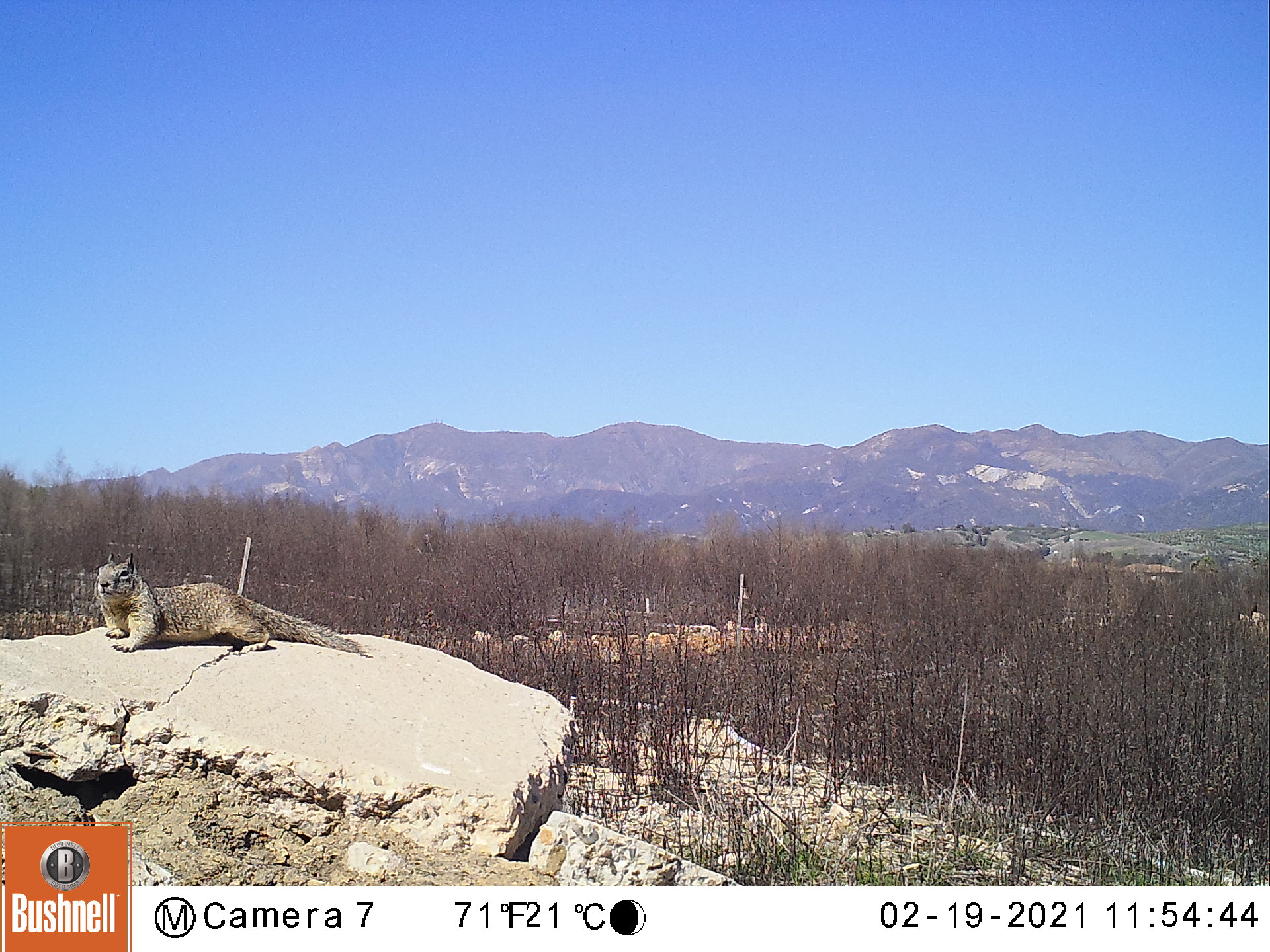 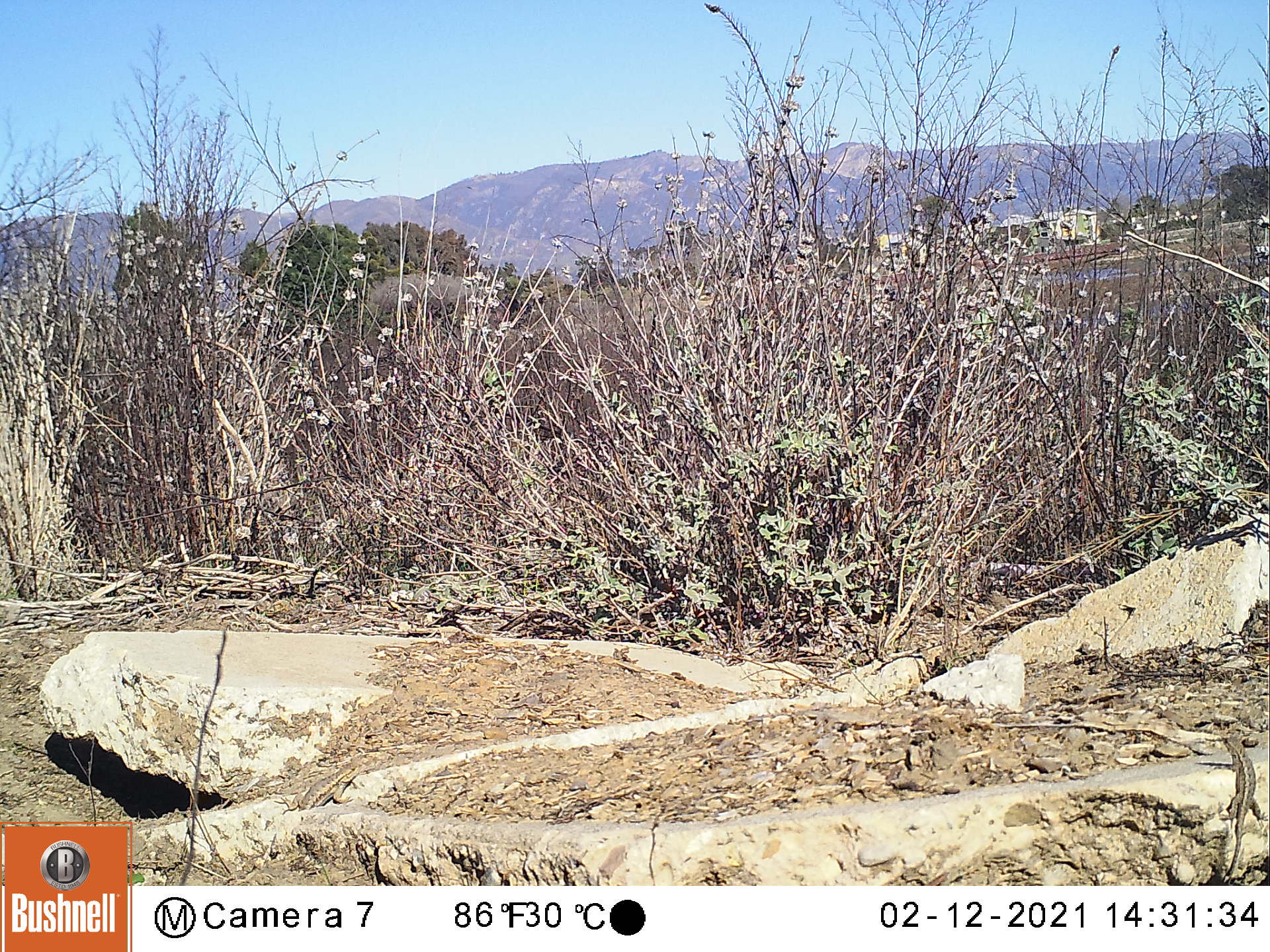 Two Western Fence Lizards can be seen in this photo: in the lower-right corner, and one to the lower-left, above the label "Camera 7".

At night, we observe many more species at the hibernacula. Deer mice and brush rabbits are seen entering and exiting the hibernacula throughout the evening and are likely occupying these structures throughout the day. Additionally, many mesocarnivores show interest in these hibernacula at night. They are seen sniffing around the entrances, likely smelling potential prey that hides inside. Thus far, we’ve recorded Virginia opossums, striped skunks, and common raccoons, as well as two rarely sighted species that have not been previously seen at NCOS: spotted skunk, and gray fox. These individuals likely do not occupy the hibernacula, but we believe their associations are important. 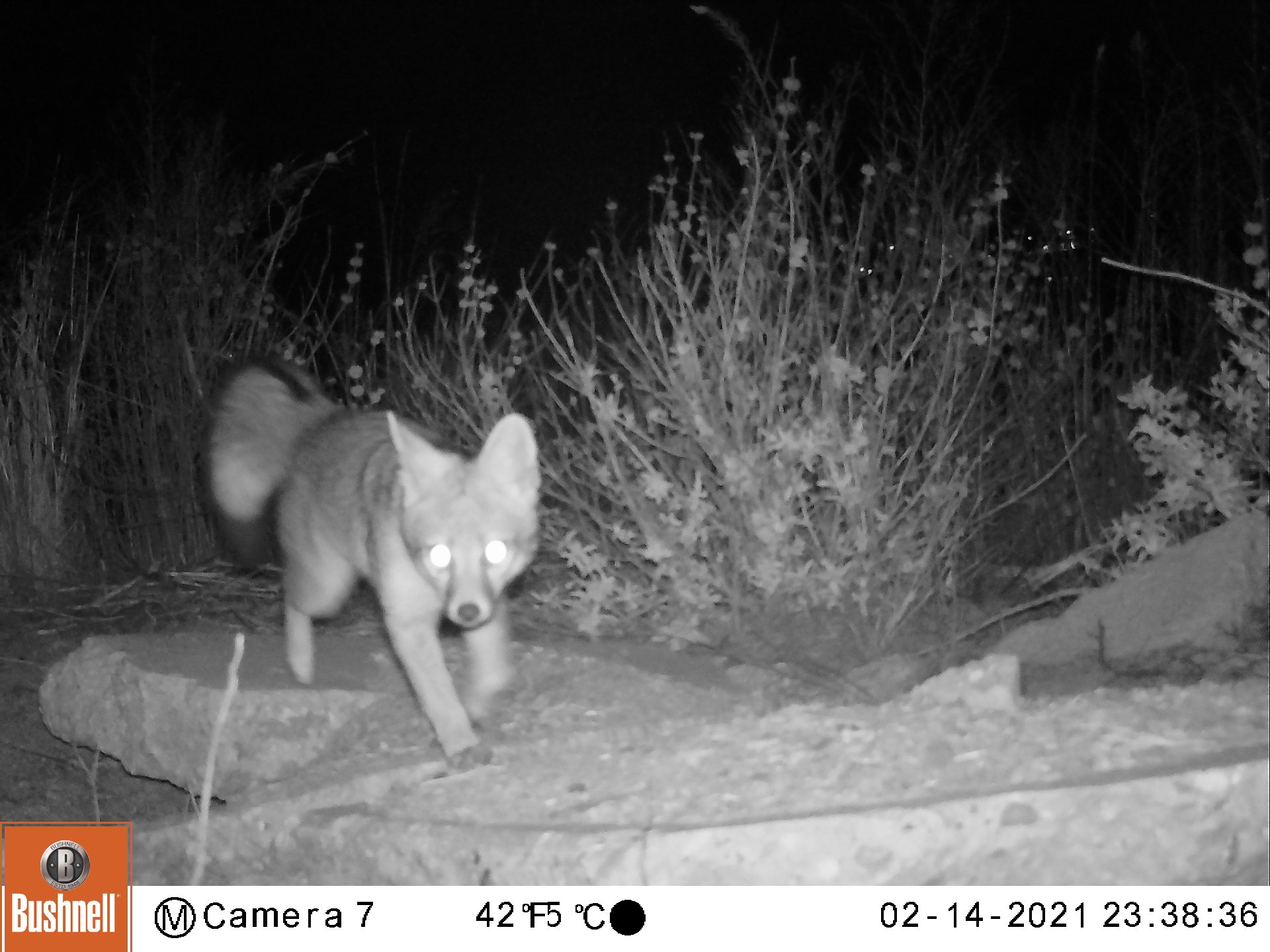 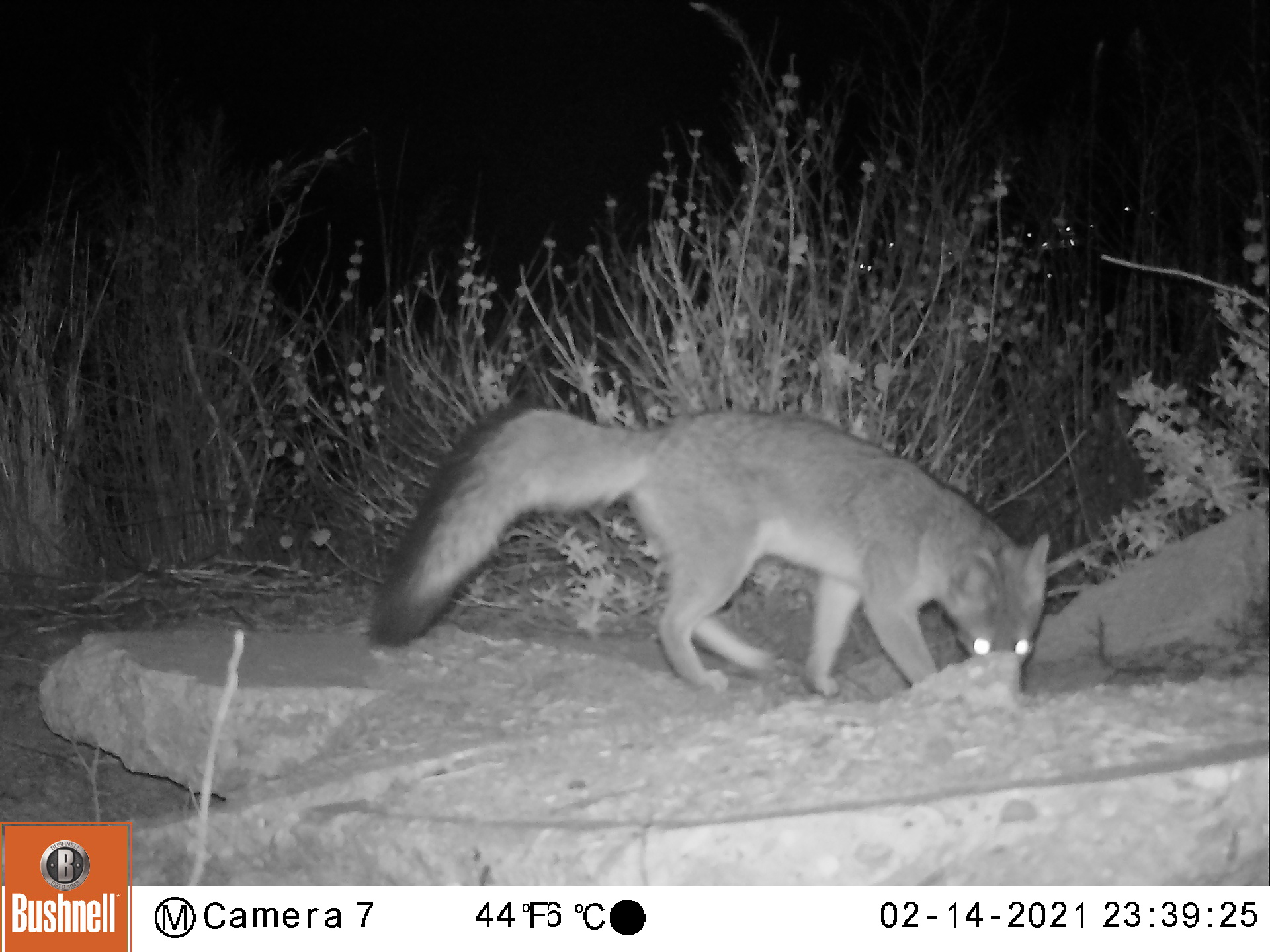 Here are two images of a Gray Fox investigating a hibernaculum at night. 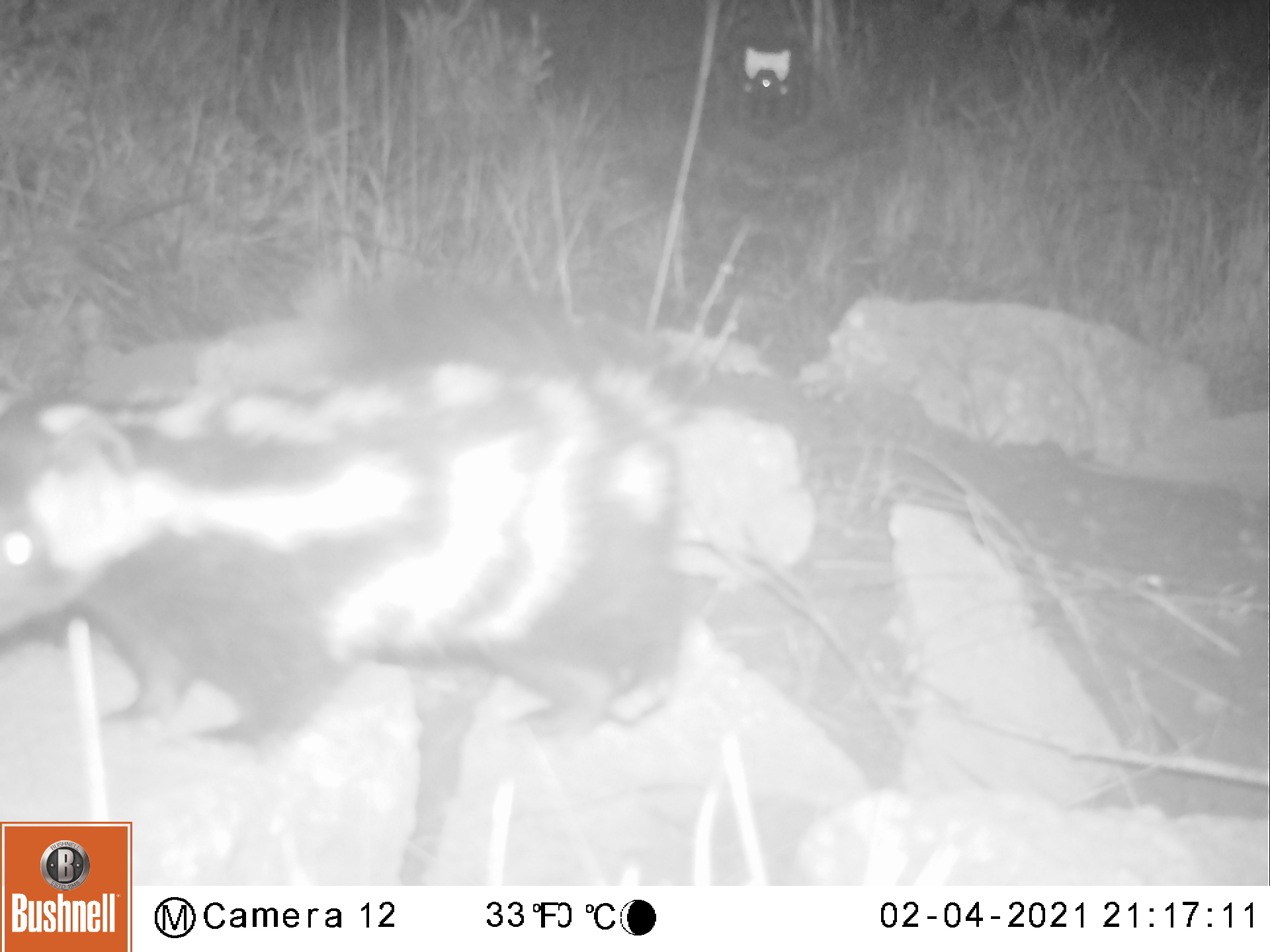 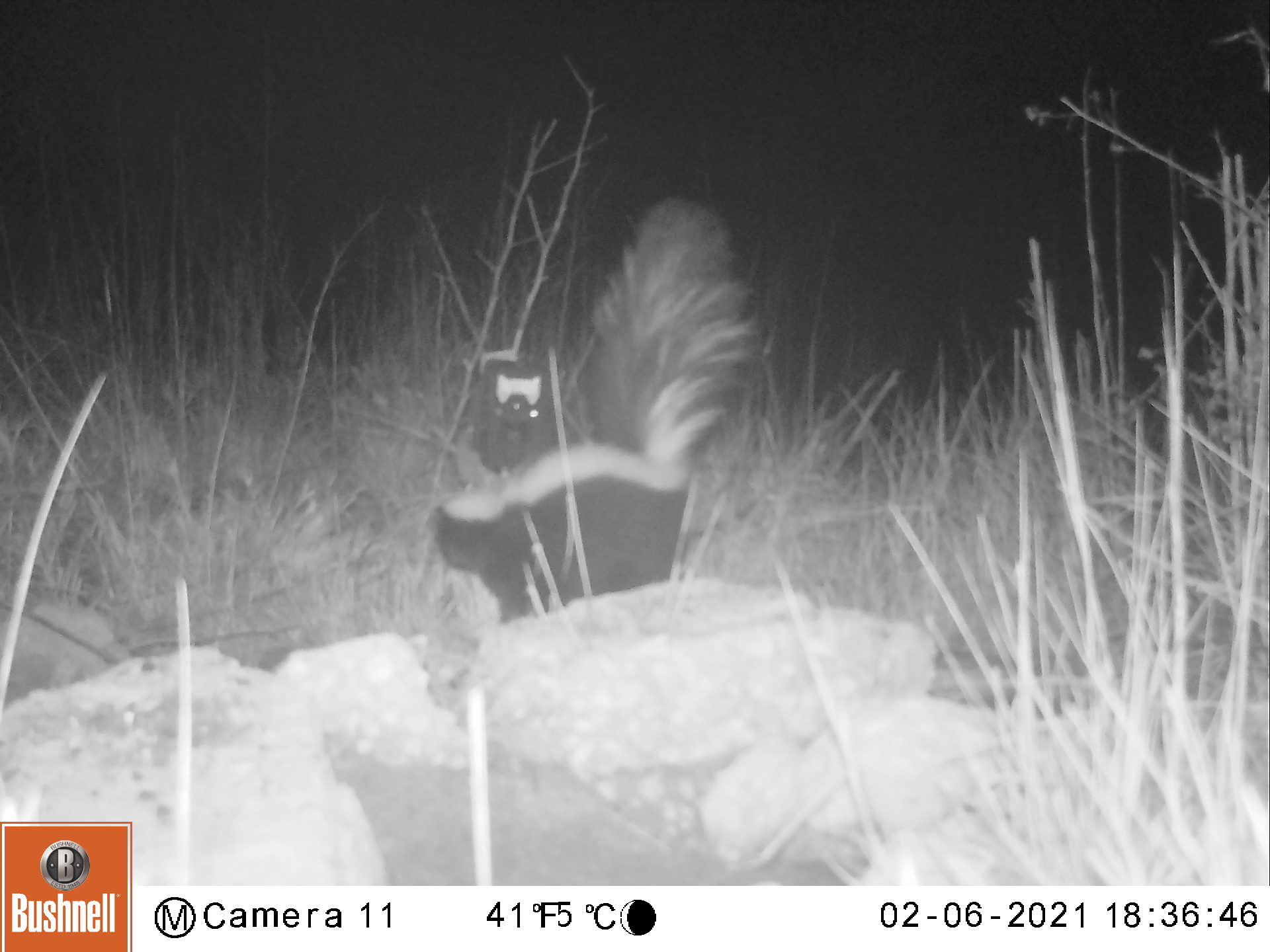 Left image: a slightly fuzzy photo of a Spotted Skunk. Right image: for comparison - this photo is of a more familiar Striped Skunk.

So far, the cameras have recorded 17-18 vertebrate species (8-9 mammals with Harvest mouse yet to be confirmed, 7 birds, and 2 reptiles) on, in, or near the hibernacula (see list of species in table below). This represents most of the primary and secondary categories of vertebrate species in our local terrestrial food web, implying that the hibernacula play an important role in the creation of habitat at NCOS. Small vertebrates are a key food source for many of the beloved avian predators at NCOS, and providing refuge spaces that support a greater abundance and diversity of these species has likely played a key role in developing the food web and supporting raptors at NCOS. This ecological complexity is usually naturally present in an undisturbed environment with features such as boulder piles, snags, fallen logs, and brushy habitat. In restoration projects that start with a barren landscape, this complexity must be creatively incorporated through low cost structures like the hibernacula at NCOS.

After we complete the processing of images from our first study period, we will discuss opportunities for additional research to further understand the role of artificial refugia and how they could be incorporated into other restoration projects.

This article was written by Alistair Dobson and edited and formatted for the web by Ryan Clark.