The central component of the North Campus Open Space project is the restoration of the upper portion of Devereux Slough, a wetland that was historically present before the construction of the Ocean Meadows golf course in the mid 1960s. Wetland ecosystems play many important roles, such as providing a multitude of habitats for many species, acting as a buffer against flooding and/or sea level rise, and serving as a natural water treatment system. They are also quite sensitive to changes that could damage any or all of those functions. In collaboration with partners such as UCSB students, faculty and labs, as well as volunteers, the Santa Barbara Audubon Society, and Coal Oil Point Reserve, CCBER has implemented a multi-faceted monitoring and research program that aims to understand several aspects of the Devereux Slough wetland and its restoration. Here we highlight a few types of monitoring and research taking place and some of what we have learned so far. 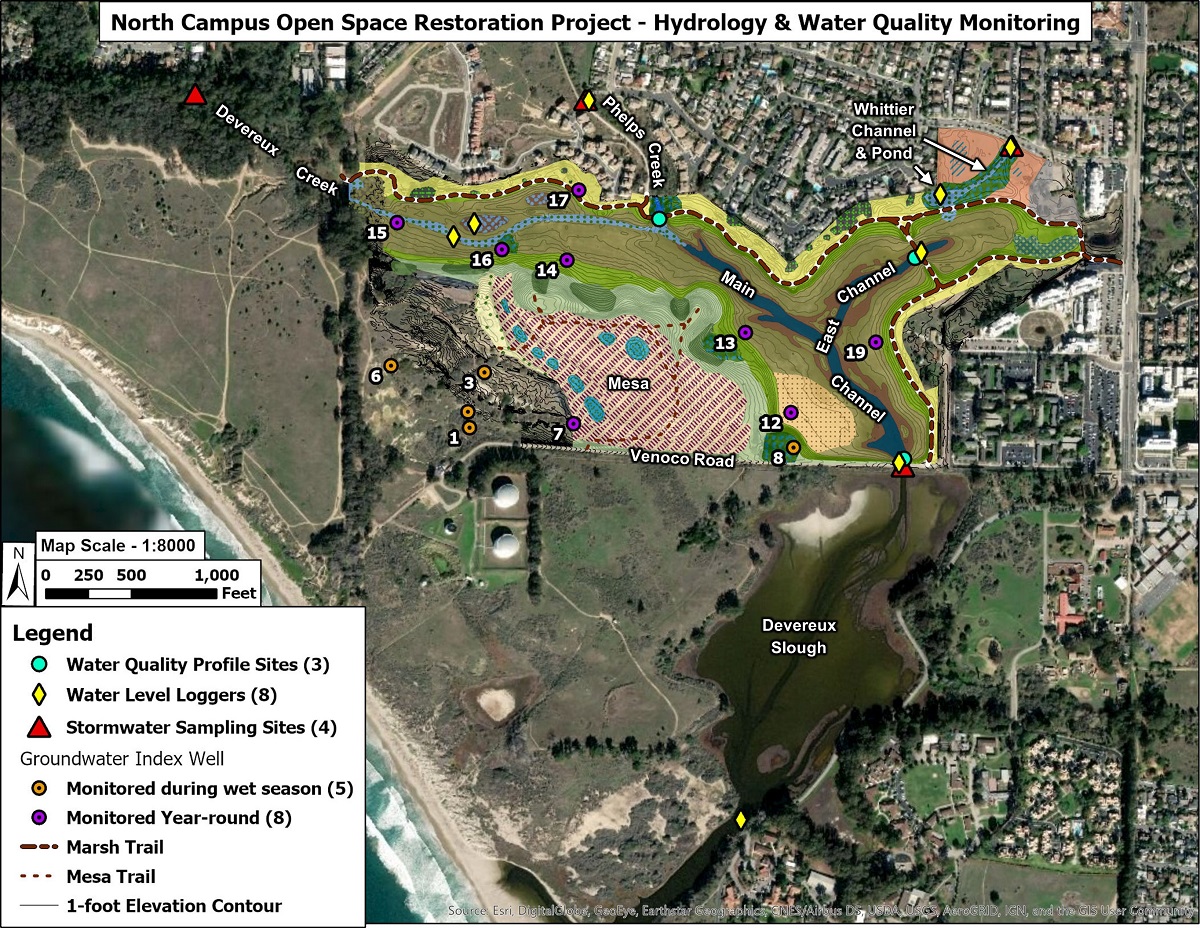 Map of the water quality and hydrology sampling and monitoring sites at NCOS and the lower Devereux Slough.

The factor that has the greatest influence on a wetland's health and function is the water that flows into it, particularly what is in that water. Nutrients such as nitrogen, phosphorus, and ammonia occur naturally in the environment and are, to a certain extent, essential for the survival of most plants and many other organisms in the soil and water. Excessive amounts of these nutrients, however, can lead to problems such as eutrophication, where algae and other aquatic plants grow profusely and then decompose, resulting in an increased concentration of carbon dioxide that makes the water more acidic, and a reduction of oxygen. Both of these effects, and especially the lack of oxygen, are harmful to aquatic wildlife.

As with nutrients, a certain amount of naturally occurring sediment in the water that enters a wetland is beneficial. Much of this sediment slowly accummulates or accretes on the wetland floor over time, and this can help increase its ability to buffer against sea level rise. When heavy rainfall occurs and causes the slough to break through the beach berm and empty into the ocean, a lot of sediment can be carried out of the wetland. Some of this sediment is eventually deposited on a beach nearby, essentially providing a natural form of beach nourishment. Abnormally high amounts of sediment entering a wetland could be detrimental by building up on the floor too quickly, smothering low-lying plants and potentially creating flooding problems.

In an effort to quantify and understand the flow of nutrients and sediment into and through the restored upper Devereux Slough, CCBER has been collaborating with UCSB Professor John Melack and his lab at the Bren School of Environmental Science and Management, the Marine Science Institute's (MSI) Analytical Lab, and several student interns on the collection and analysis of water samples for concentrations of nutrients and suspended solids (which are used as an indicator for sediment). This program was initiated in the fall quarter of 2018 and involves collecting samples during storms from the three main sources of water that feed into the upper slough (Devereux and Phelps Creeks, and a storm drain outfall by Whittier Drive) and at "Venoco" bridge - the point where the restored upper slough connects to the lower slough on Coal Oil Point Reserve (see the red triangles in the map above). We have been collecting samples with Teledyne ISCO autosamplers provided by John Melack's lab as well as grab samples. The ISCO samplers collect water at a set time interval, usually every 1 to 2 hours, while grab samples are collected by hand once or up to a few times during a storm depending on the duration and intensity of rainfall. All grab samples are analyzed for both nutrients and sediment, while select ISCO samples are analyzed based on when they are collected with respect to the timing of rainfall and rising and falling water levels. The MSI Analytics Lab conducts the analysis of nutrient concentrations while CCBER staff and student interns analyze the suspended solids concentrations of samples. In the first sampling season (Nov. 2018 - March 2019), 82 samples from 5 storm events were analyzed, and last winter, 195 samples were analyzed from 5 storms. This season, we have collected samples from two storm events, including the large storm that led to the slough breach on January 28. Examples of the nutrient and sediment data from a storm sampled in 2019 can be viewed here. 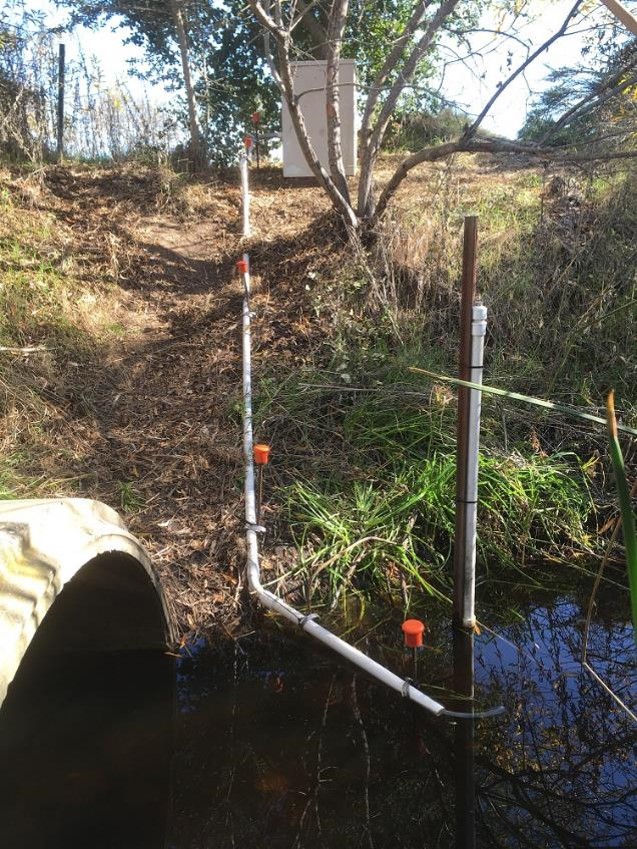 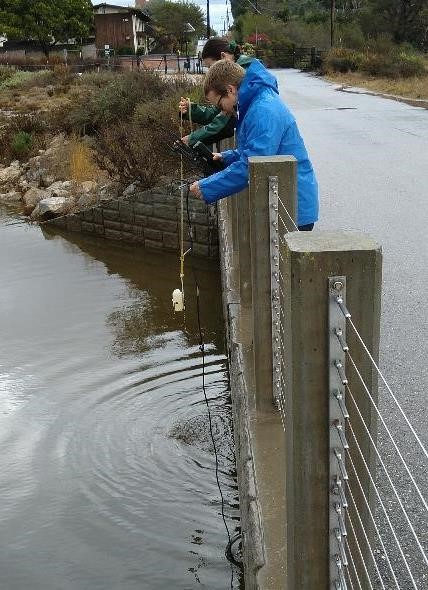 Earlier, pre-NCOS studies on nutrient concentrations entering the lower Devereux Slough found relatively high levels of nutrients (particularly ammonia and phosphate) compared with other predominantly urban watersheds (Aguilera and Melack 2018), and a eutrohpication survey of coastal watersheds along the Southern California Bight ranked Devereux Slough with the lowest score (McLaughlin et al. 2013). As we collect more data this winter, we are beginning to work on more in-depth analyses so we can compare with the results of the earlier studies as well as studies of other, similar wetlands. 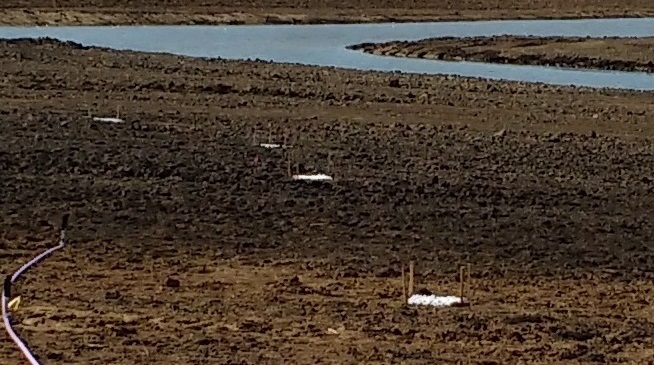 In addition to analyzing the amount of sediment in the water, we are also measuring sediment accretion rates on the wetland floor. This is achieved by extracting sediment cores at specific locations where a layer of feldspar was placed as a marker at the beginning of the restoration project. Feldspar is a naturally occurring, white, chalk-like material, which will help make it clearly visible in the soil sample. We established feldspar plots in early 2018 in the upper and lower portions of Devereux Slough, and the first set of soil cores are due to be extracted in 2022. 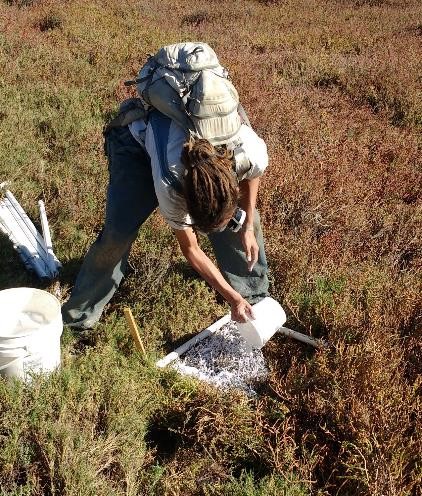 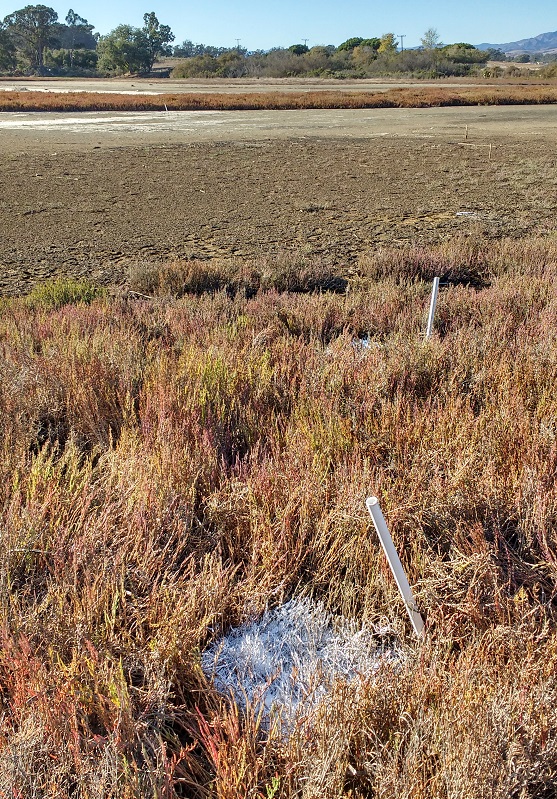 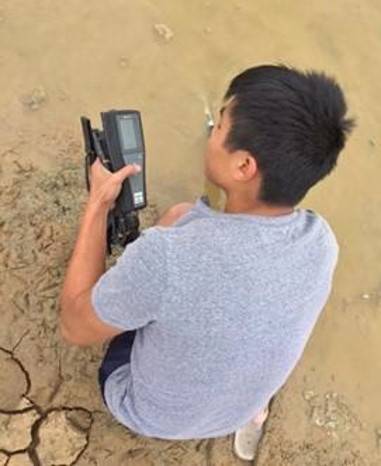 As mentioned above, oxygen levels in the water can have a strong influence on the suitability of a wetland for many types of wildlife. In particular, low oxygen levels can be inhospitable and create "dead zones" where virtually no organisms (other than a few bacteria and other microbes) live. Several factors influence the amount of dissolved oxygen (DO) in water, including salinity and temperature, which also affect the types of species living in a wetland. These three parameters of water quality can vary in many ways across a single wetland, such as by depth, location, and time of day or year. CCBER has deployed multiple instruments in the upper and lower Devereux Slough for keeping track of changes in DO, salinity, and temperature. In addition, since the start of the restoration project, student interns and volunteers have led the collection and processing of data to help visualize and interpret the variations of those parameters across the restored upper slough. This involves weekly monitoring with a portable water quality sensor (see image at left), and entering the data into an app that is later transfered to a database where it is processed and plotted. Examples of the data collected in 2019 are plotted below and show that there is some variation by depth in DO and salinity for much of the year in deeper areas of the slough. Other data (not shown here) clearly reflects the diversity of habitat conditions by location, where portions of the wetland that are closer to the creek and stormdrain inputs tend to have lower salinity and more stable DO levels throughout the year.

We thank the Coastal Fund and the many UCSB students and volunteers, such as Madeline Cooke, Alec Pineda, Jillian Allison, and Victoria Stec, who have played a vital role in this work.

Dissolved oxygen (top chart) and salinity (bottom chart) recorded at the surface and at depth in the restored upper Devereux Slough at Venoco Bridge.

Keeping an eye on the biotic attributes of a wetland is just as important as the abiotic components. The presence, abundance, and diversity of plants and animals can give a clear indication of the health and quality of the habitat, and can also provide an early signal of potential problems. Three groups of wildlife that we have particularly focused on at the NCOS wetland include birds, fish, and aquatic arthropods. Bird surveys have been conducted monthly since September 2017 in collaboration with expert birders from the Santa Barbara Audubon Society. We have reported elsewhere on the data collected during the bird surveys, which tell us what species are using different parts of the wetland habitat. Fish monitoring in Devereux Slough has been conducted once a year with the generous guidance of Biologist Rosie Thompson. While this effort is primarily focused on detecting the endangered Tidewater Goby, all fish and other aquatic macrofauna are identified and counted. The results of the fish survey from 2019 are available in the 2nd annual NCOS Monitoring Report. 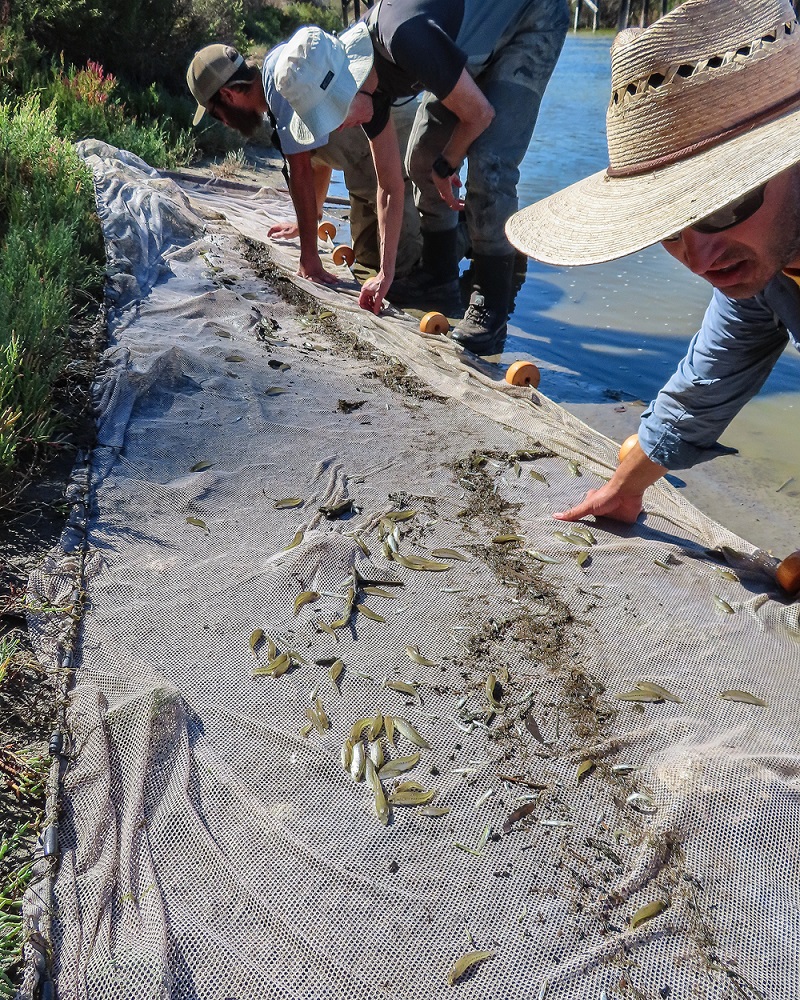 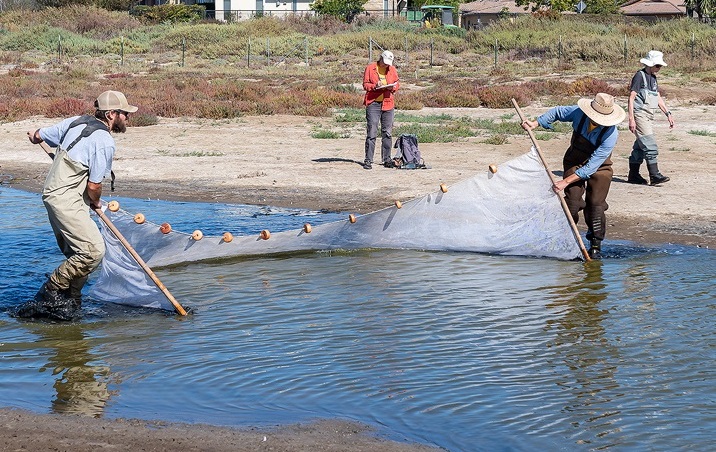 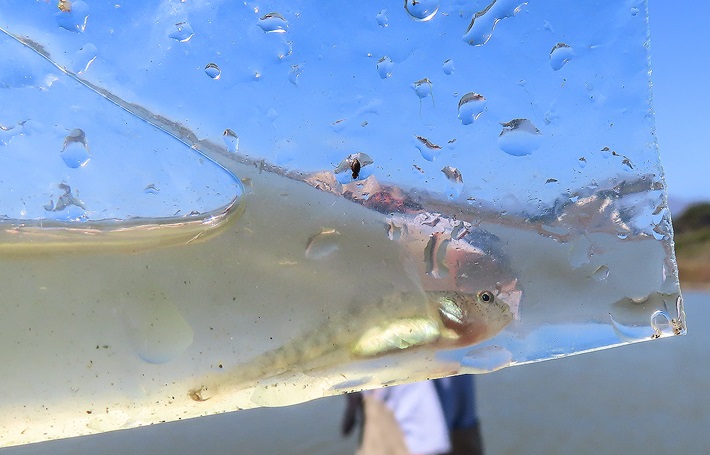 Fish surveys in Devereux Slough are conducted by dragging a seine net (upper left image) and then quickly identfying and counting the fish in the net on the shore before returning to the water alive (right image). Tidewater goby (lower left image) were observed near the mouth of Devereux Slough in the 2019 survey - it is common to briefly place them in a trasparent bag to help in identification before releasing them. 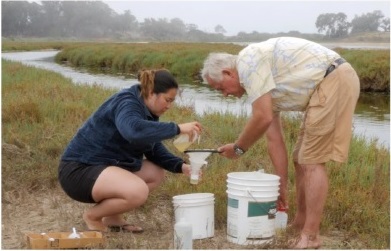 Aquatic arthropods are a key food source for many wetland birds, fish and other wildlife. They can also be sensitive and early indicators to changes in water quality. With many thanks to Steve Senesac from the Santa Barbara Audubon Society, a program for surveying, identying and quantifying arthropods in Devereux Slough and some of the other wetlands at NCOS was developed and initiated in 2018. This work has evolved and been made possible thanks to assistance from Coal Oil Point Reserve, UCSB professor Scott Cooper, and many, many enthusiastic and dilligent students. The survey results form the first year surprisingly suggested that the abundance and diversity of arthropods were greater in the newly restored wetland in NCOS than in the extant lower Devereux Slough (see figure below).

More details of this work are available in a project report. We are pursuing a new and exciting aspect of this project that will use eDNA technology (with assistance from CALeDNA) to supplement and enhance the identification of arthropods determined using traditional methods.