Wild Encounters in Our Own Backyard: NCOS and Beyond 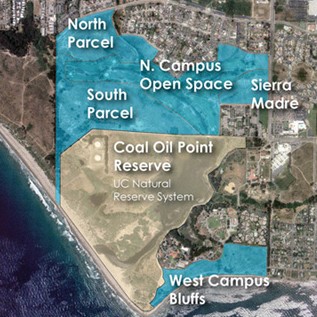 As the North Campus Open Space project progresses into its second year of restoration work, more and more wildlife is making use of the evolving habitat. For many restoration staff, students and volunteers who spend hours planting and weeding, seeing the wildlife use the habitat is a rewarding and inspiring experience.

Elaine Tan, student outreach and communications intern, interviewed CCBER restoration staff to learn about their encounters with wildlife at North Campus Open Space (NCOS) and surrounding restoration areas at UCSB, including North Parcel, South Parcel, and Sierra Madre. Together with Coal Oil Point Reserve, these areas create an inter-connected network of restored habitats that can provide valuable refuge and food for a broad range of wildlife. The people who work in these areas on a regular basis are a good source of information on the types of wildlife seen, the wildlife-human interactions inherent to an area surrounded by urban sprawl, and how these wildlife sightings impact their own feelings about their work.

Map of the network of open space restoration areas that includes NCOS.

CCBER staff agree that the most interesting and frequent encounters are with birds. Ryan Clark, CCBER's monitoring coordinator who is heavily involved in checking NCOS's vitals, recalls his most memorable wildlife experience on the site: "I was out getting some flow measurements shortly after a storm in the far west part of NCOS and saw a great blue heron who had just caught a gopher, and then a red-tailed hawk swooped down and stole it right out of the heron's beak! The heron made a loud screech as its meal was stolen. It felt like something right out of a documentary film." He also mentions the excitement he feels over rarer sightings of night life, such as getting "goosebumps" whenever he hears or sees owls out there, "it is a special treat." 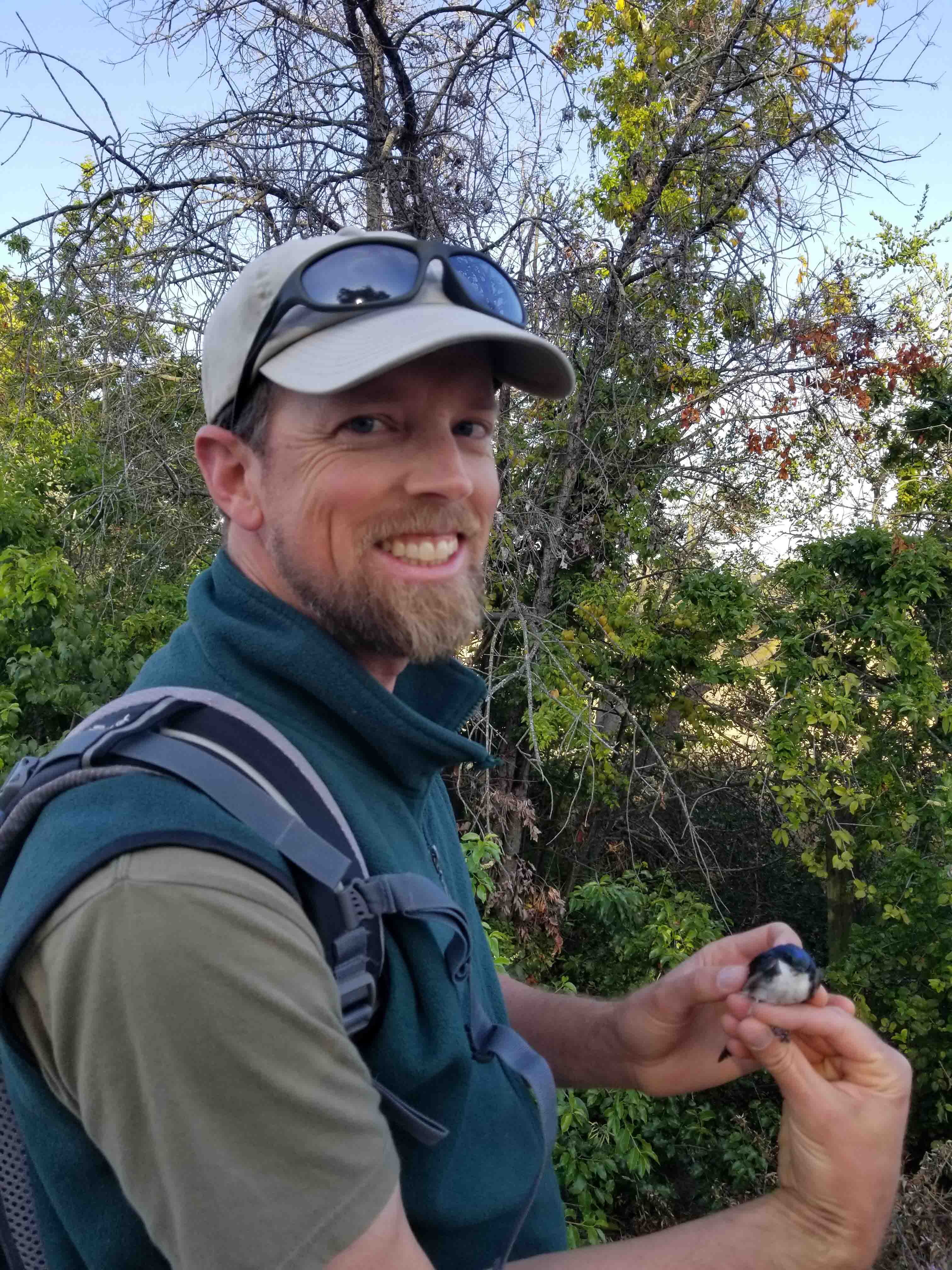 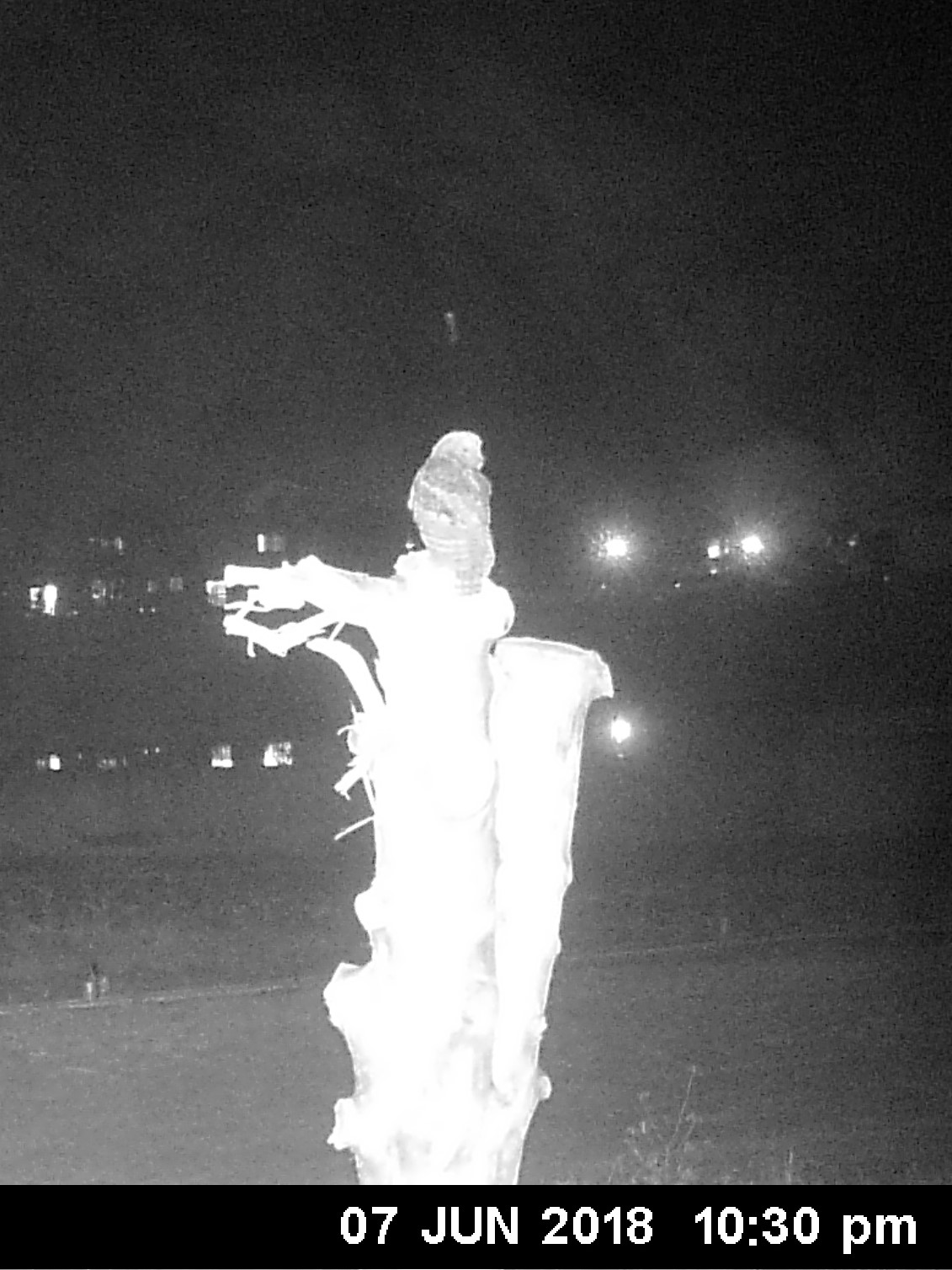 Left: CCBER Monitoring Coordinator, Ryan Clark, holding a Tree Swallow at Lake Los Carneros. Right: Infrared photo of an owl on a snag at NCOS, with the lights of North Parcel faculty housing shining in the background.

Steven Ortega and Teal Coppock discussed bird behavior that students find interesting and exciting, as well as things they have seen. "Probably one of the most memorable species is the killdeer," Steven muses, "because their nests are super-accessible." They lay their eggs in a little divot in the bare ground, and student workers occassionally stumble across them. Teal says that "it's been cool to see the nests, especially when you get closer and they do their broken-wing behavior to get you away from the nest. I have seen about 5 to 6 nests out there, but I know that there are more."

Another common sight are great blue herons, Steven has seen a great blue heron snag a gopher and take it to the water, and dunk it in the water a couple of times. He muses, "I'm not really sure why they do this, probably to lubricate it so it'll go down easier."

While many of these bird encounters are enjoyable, Steven discusses a rather "shaky" relationship with the waterfowl, including a flock of greater white-fronted geese that stayed in the area during the winter and spring. "They're fun to see. They helped us by eating weeds, but also ate a lot of the giant spike rush from the newly planted vernal pools; that's habitat usage, I guess." 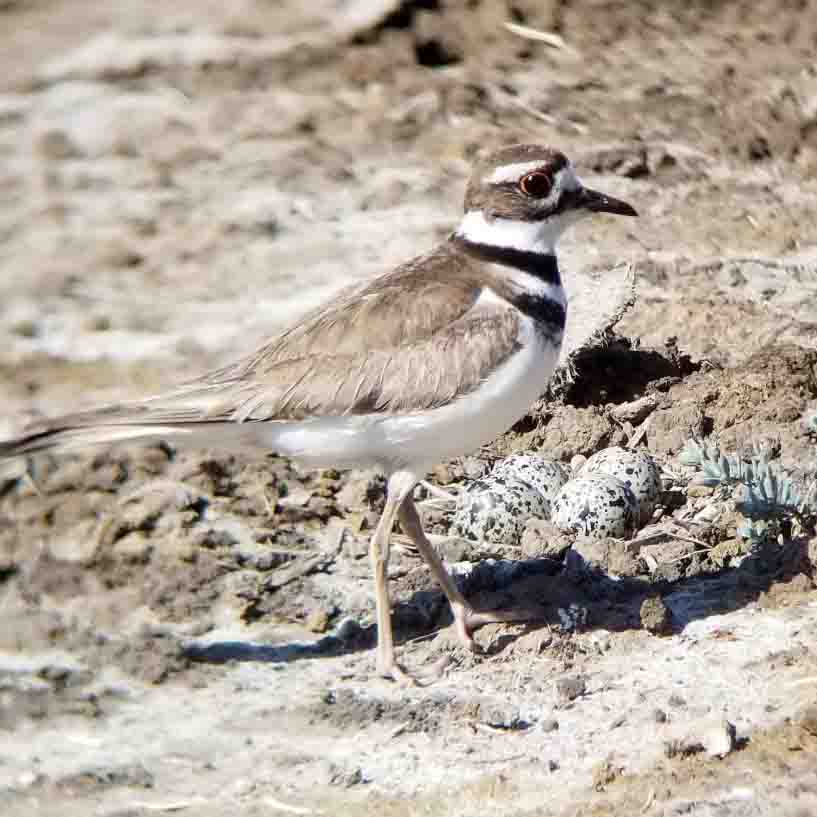 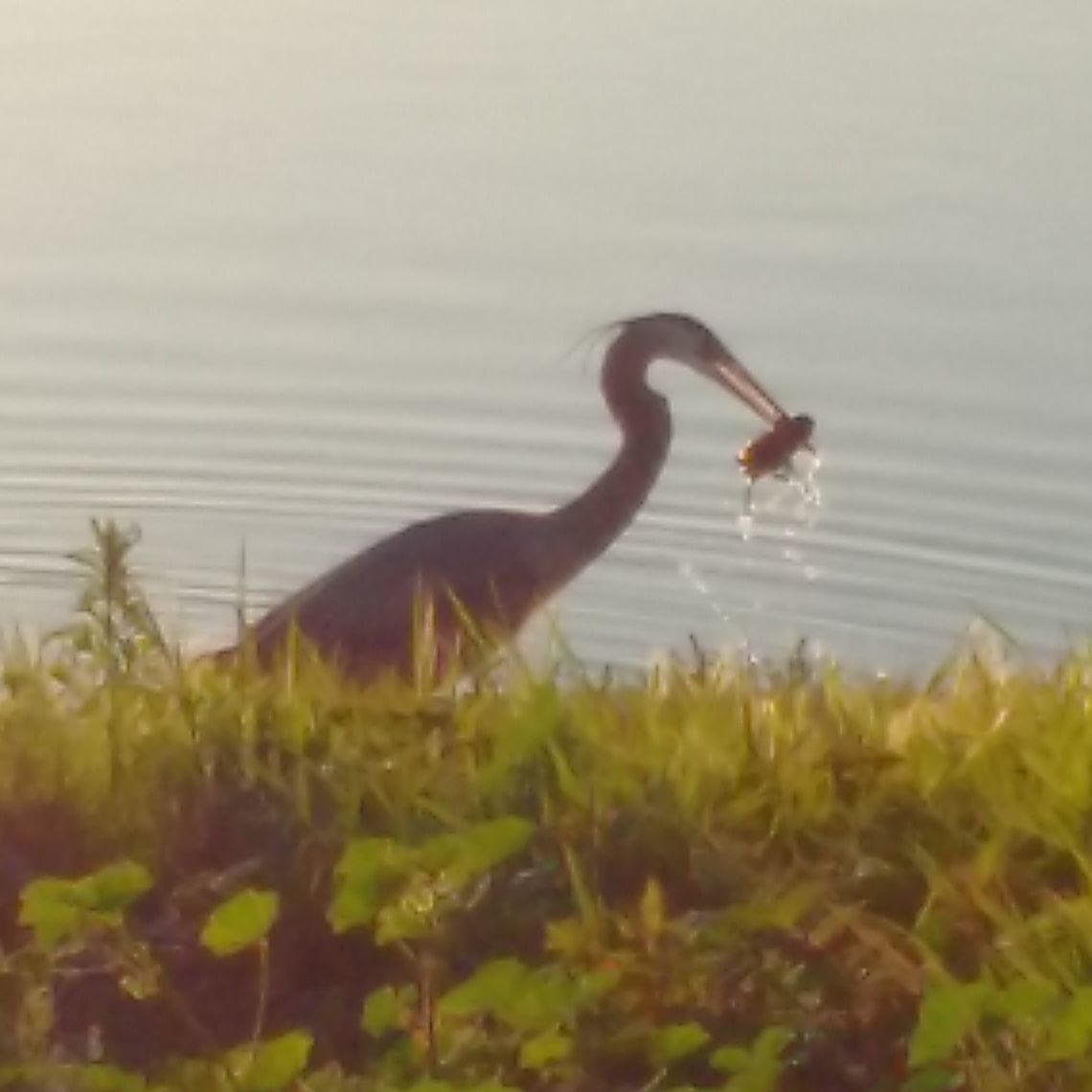 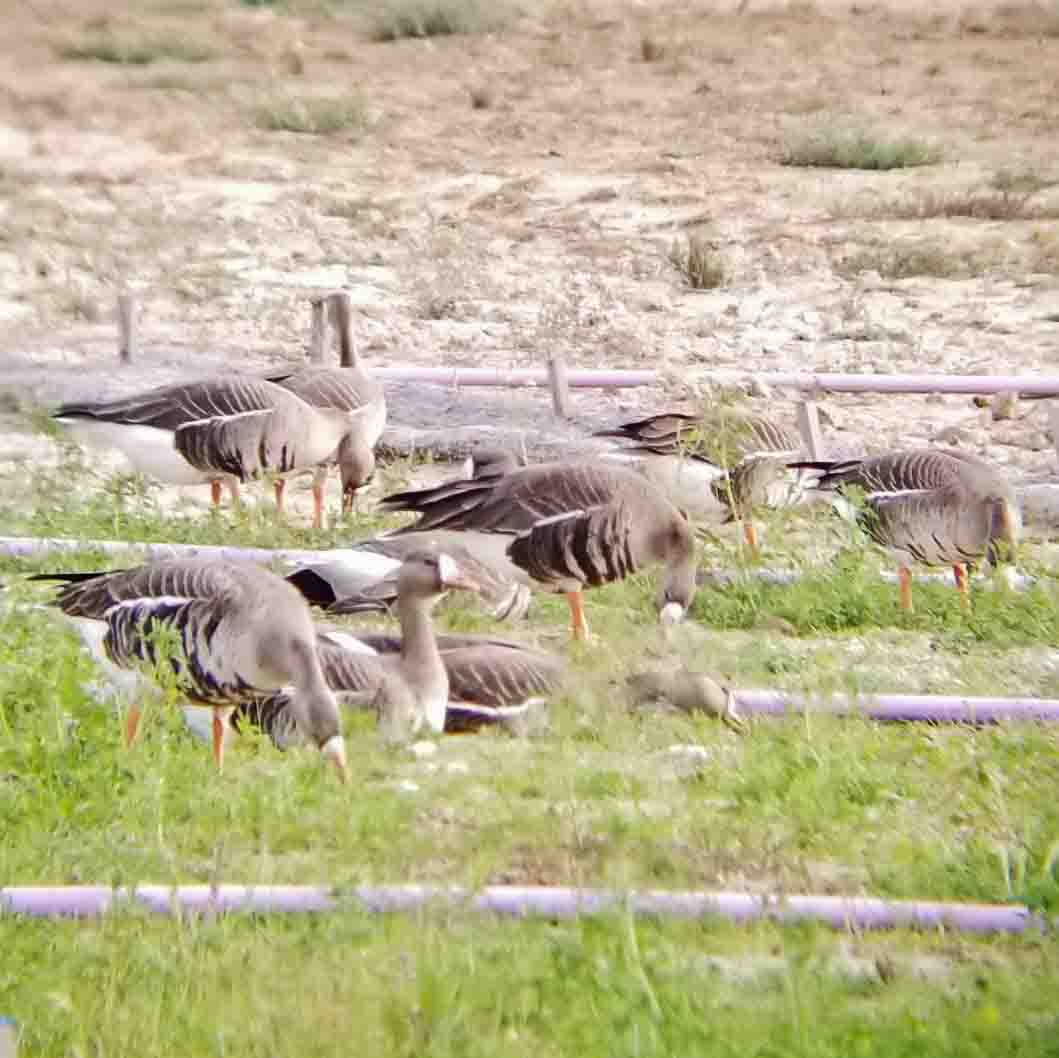 Raptors are also a focal group, as Steven recalls. "They're big birds, so they're really easy to see. People are always interested to see the battles between hawks and crows. I never really knew this was a thing until I started working with CCBER."

Beau Tindall oversees the South Parcel area, and does bird surveys at various restoration sites. An "eye-opening moment" for him when he started working at CCBER was a food exchange between a pair of white-tailed kites. "Dave Harris, a former employee, was explaining the food exchange between mates, and it couldn't have been a minute later when we saw the male catch a vole on the ground, fly up, flip over, and hand it to the female. I've done a lot of bird and raptor surveys since, and this was the only time I've seen that."

Beau has seen four burrowing owls at South Parcel over the years, a kestrel grabbing a hummingbird at NCOS, and other impressive feats of predation. "I was doing a bird survey at South Parcel in the early morning and I heard this insane sound right over my head. When I looked up there was a huge plume of feathers and a peregrine falcon flying off with one of the six pigeons I'd seen earlier. It was crazy how loud the falcon was, coming in at 100 miles per hour or more." 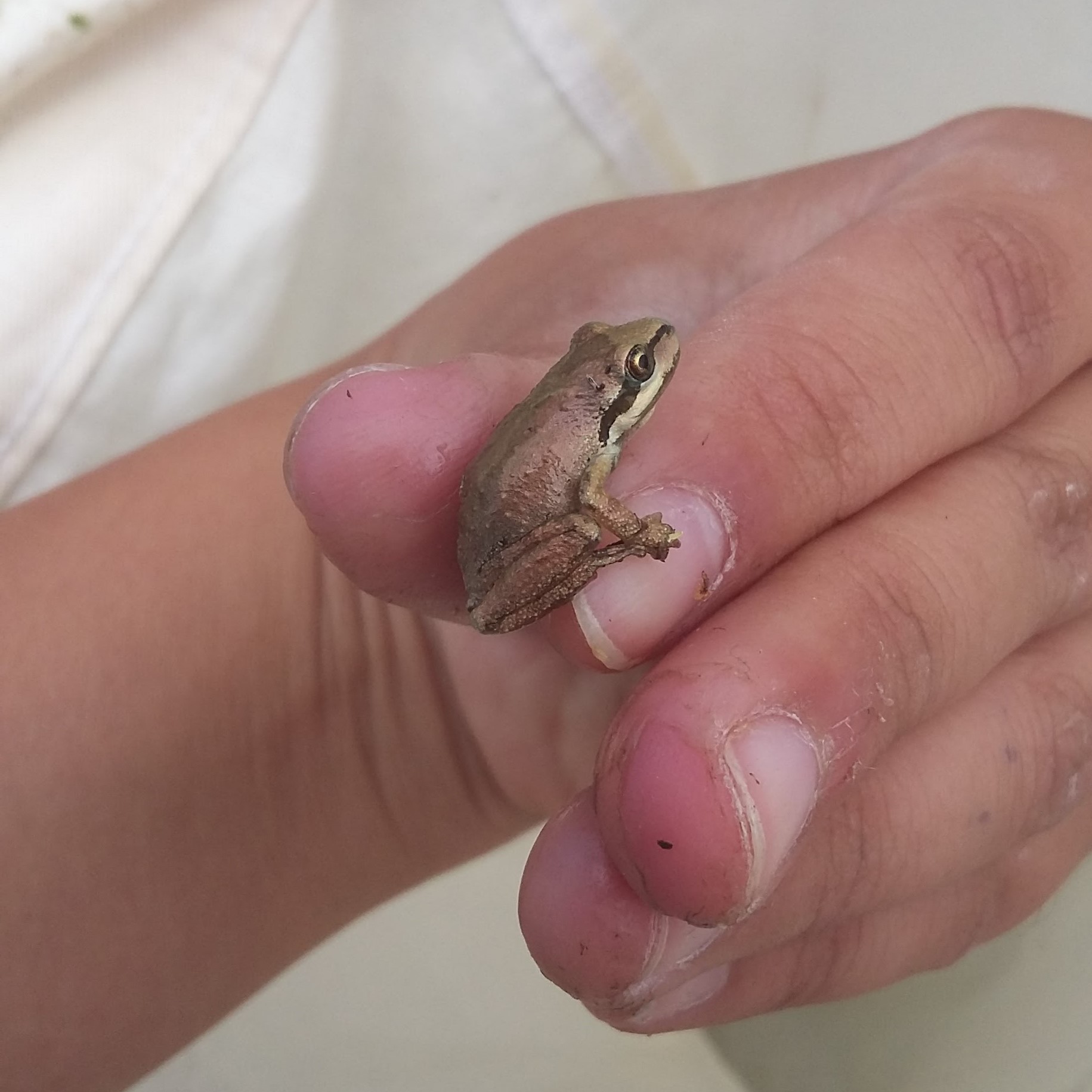 Reptiles and amphibians are also common and frequently encountered at all sites. Pacific chorus frogs are prevalent in the vernal pools and can create quite a racket with their singing.

One striking species that is frequently encountered is the gopher snake. Steven says "I come across gopher snakes all the time. That's fun for people too." Beau recalls an individual gopher snake dubbed "Lenny" that lived in the South Parcel shed a few years ago. "We saw him a lot, but one notable event was when he killed a full-sized rabbit, and we were very confused as to how he thought he was going to eat it." 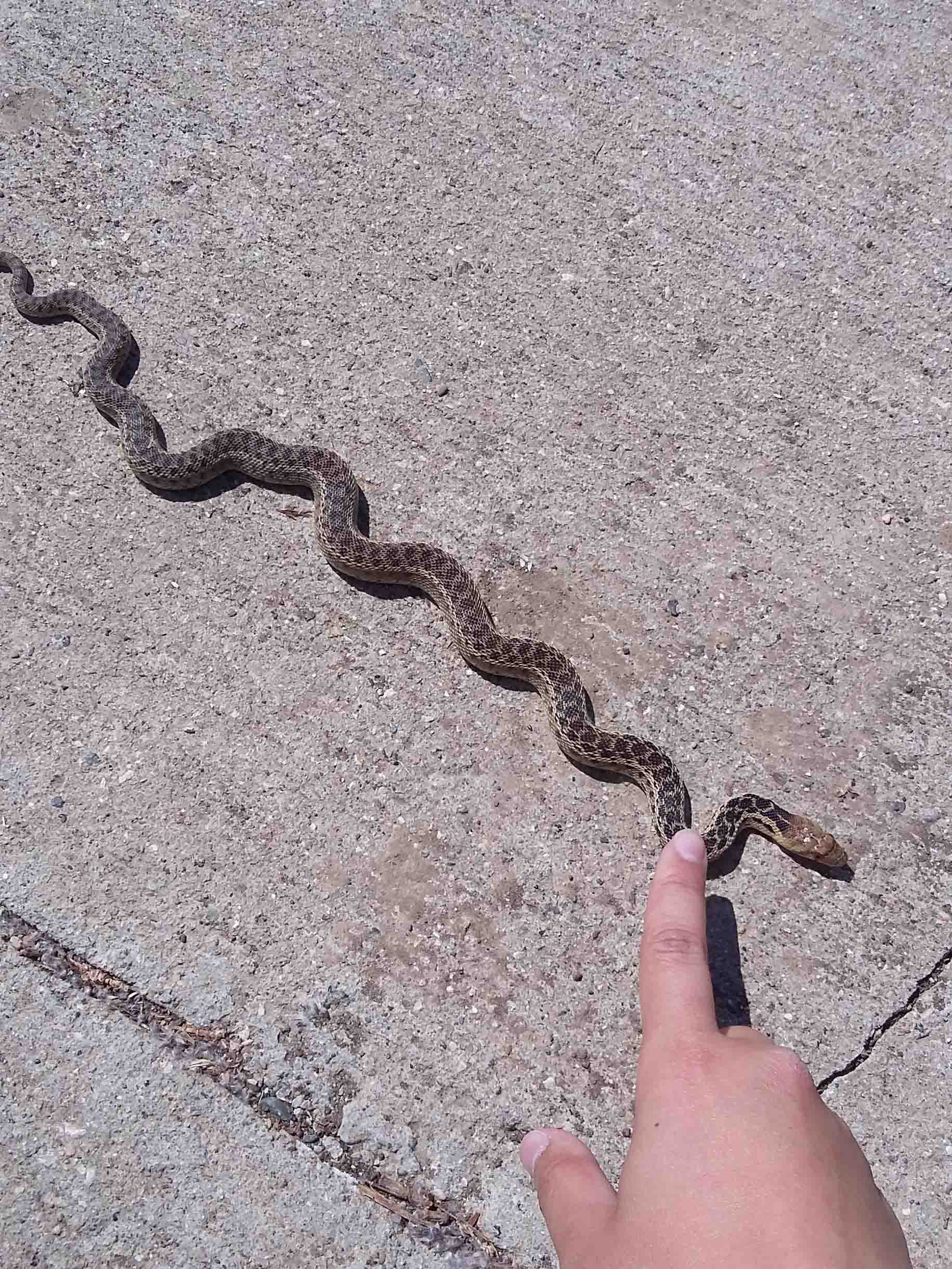 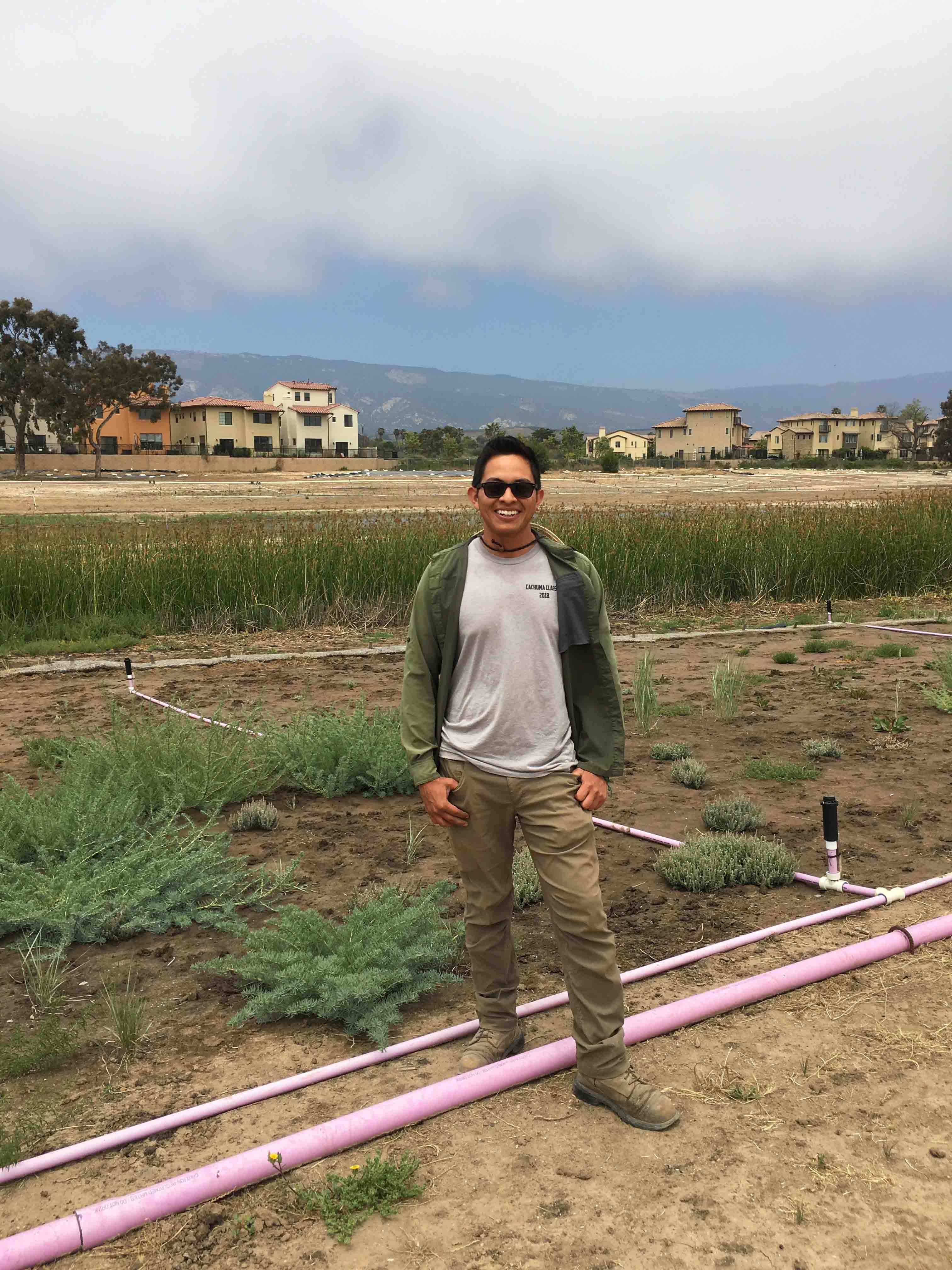 Gopher snakes, such as this young one pictured at left above, are regularly seen around campus and are one of Steven Ortega's (right) favorite encounters at NCOS.

Steven discusses the "unintentional habitat" created by the process of solarization, or killing weeds by using the intense heat of sun-warmed black plastic. The plastic is stretched over invasive plants, and "when it's pulled up, lizards and snakes and voles go scattering." Just the other day, Catherine Reilly, a restoration assistant at North Parcel, took a picture of a western skink with its eggs. "It was in a little ditch. When I took the plastic out, he kind of burrowed in to the side of his little hole. I put the plastic back because I felt bad." 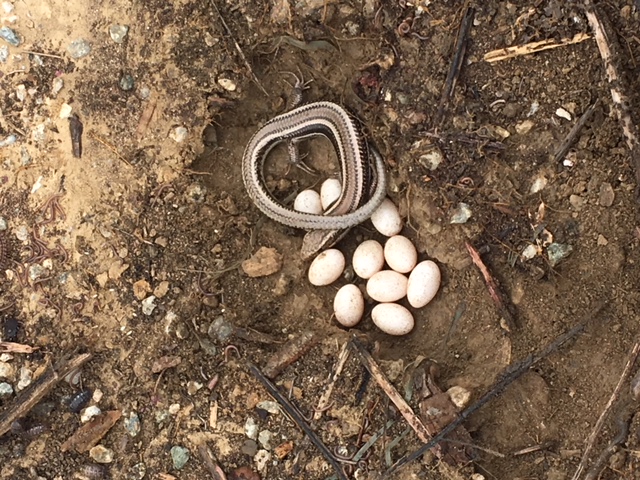 A western skink protects its eggs until they hatch. Photo by Catherine Reilly.

Mammals are much more elusive, and observations are almost always notable. A surprising trend was stumbling upon the predators bathing in the vernal pools. Catherine remembers that "we had a raccoon one time at North Parcel. I walked up on him swimming in our vernal pool, which was pretty cute. The pool was probably a foot and a half deep, and he was completely submerged up to his neck, just paddling around. I came back 45 minutes later, and he was on the beach of the vernal pool, laying on the edge relaxing."

Beau has also seen this amusing behavior at South Parcel. "I had recently created a vernal pool and it rained shortly after, which created a mud puddle. I came in one morning to do a bird survey and looked down, and there was a bobcat playing around in the water. So of course, I tried to sneak in as close as I could to get pictures of it. I got 40 yards away before it noticed me and slipped off." 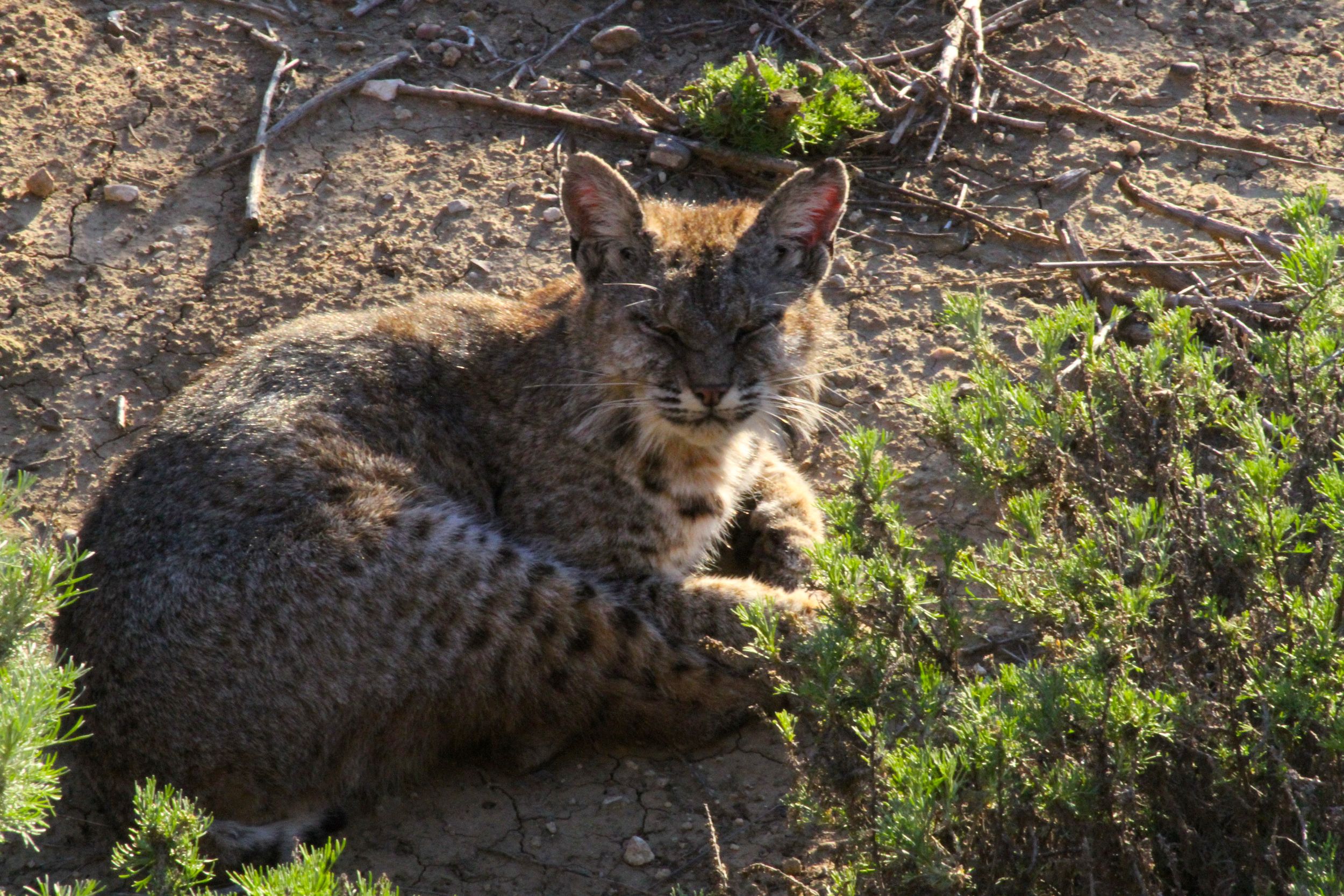 Rarer mammals have been spotted near NCOS as well. Beau recalls when "in 2012, right at the Venoco bridge at NCOS when it was still a golf course, we saw a long-tailed weasel with four to six babies riding on its back, right along the edge of the road. I've also seen Merriam's chipmunk, out there at South Parcel in the eucalyptus trees."

Andy Lanes, who leads the Kids in Nature program, was asked about what he thinks will pop up at NCOS in the coming years, based on what he's seen at other restoration sites. He answers, "raccoons, skunks, and opossums - the big three. Additionally, there'll be the same animals that are already abundant out there - brush rabbits, ground squirrels. Once there's more cover, the rabbits will be more abundant, since they'll stay near shrubbery." 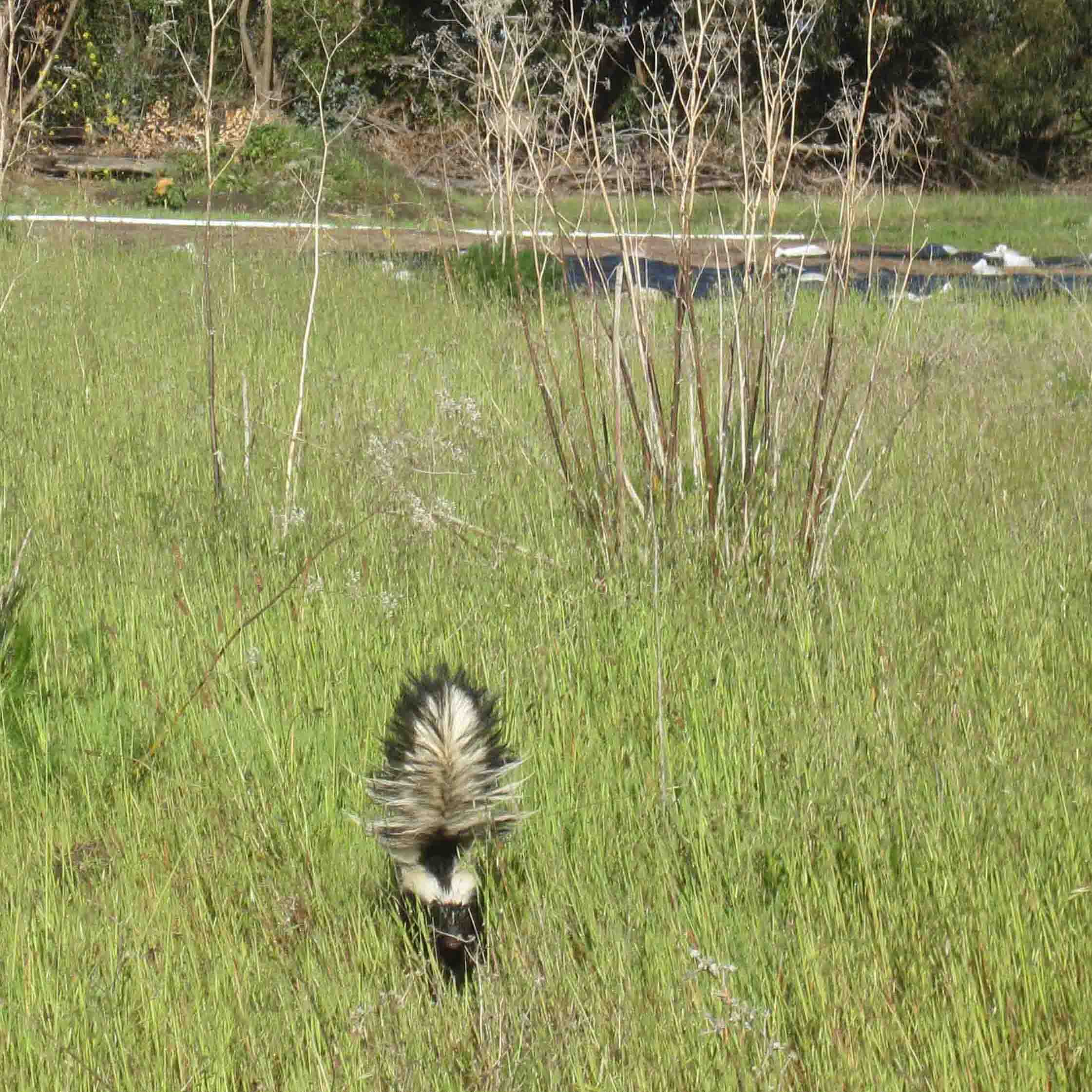 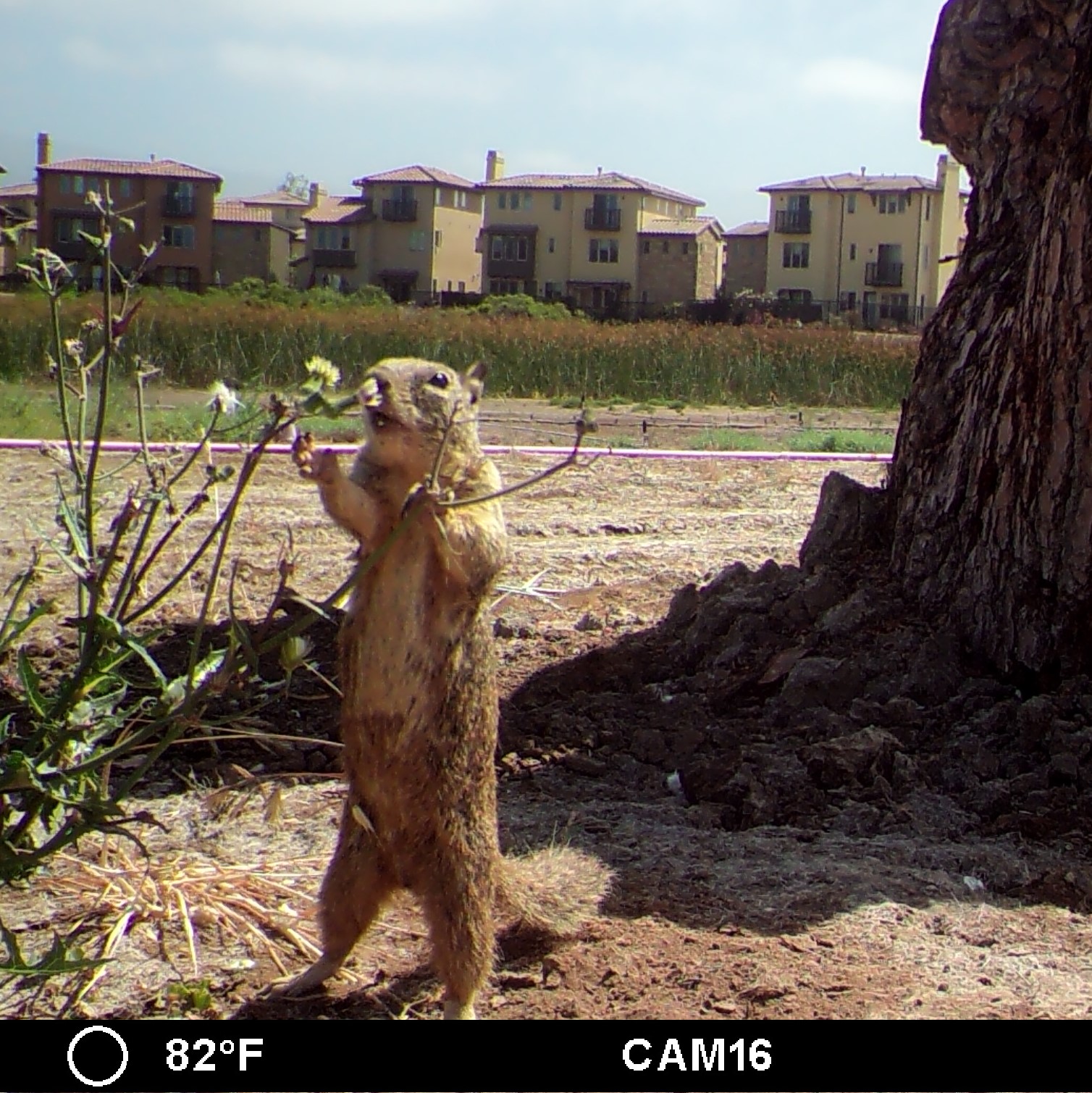 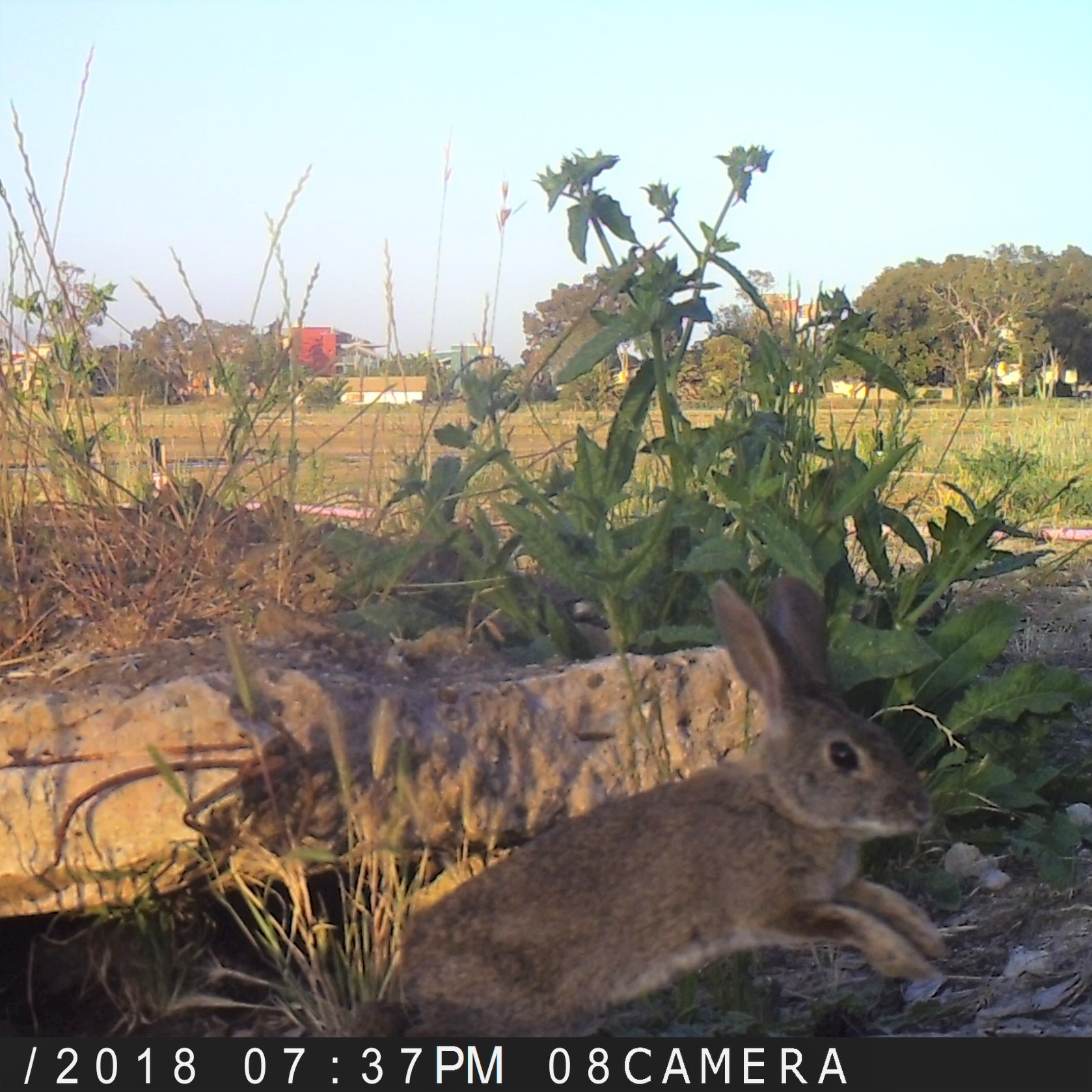 A striped skunk at South Parcel (left), a California ground squirrel eating a Sonchus flower (center), and a brush rabbit at NCOS (right).

Though often overlooked, insect and plant life were also mentioned, with grasshoppers and mantises increasing during the summer. Teal is a self-professed plant person, and the stationary plant life interest her much more than the animals. "The coolest part of NCOS is seeing all of the plants coming out of the seed bank, especially those that we didn't plant ourselves but that grew out there anyway. There are way more natives popping up than I expected - lots of blue-eyed grass recruits coming up, and some less showy, small plants that the public might not care about, such as Plantago erecta, which are still special" 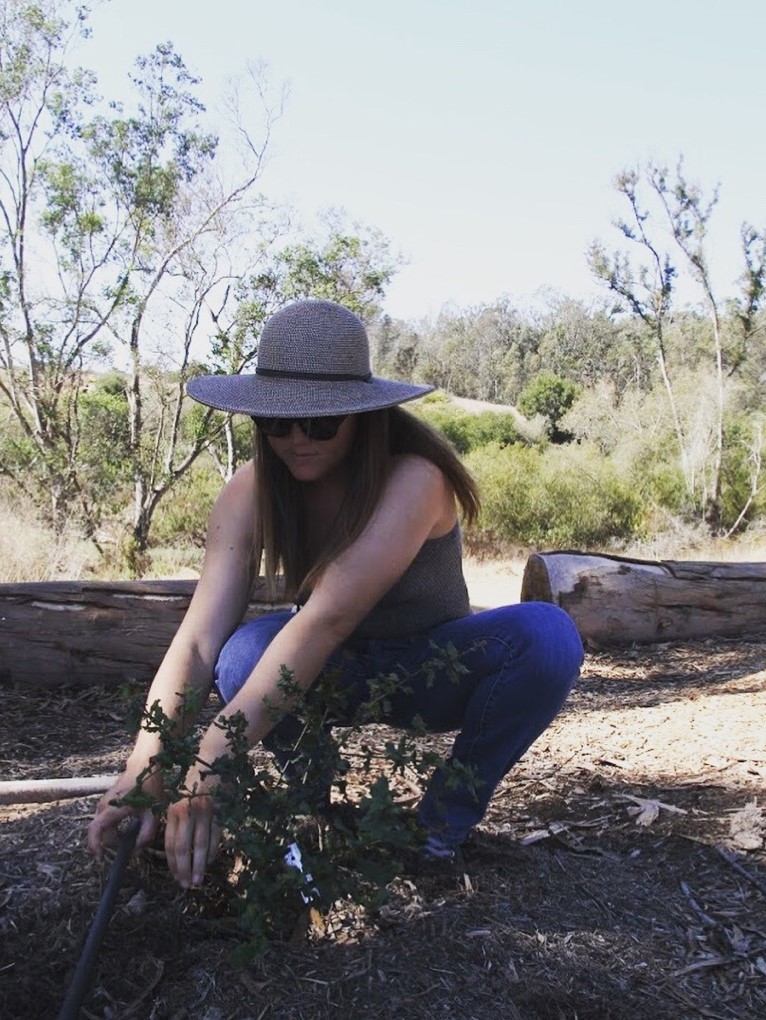 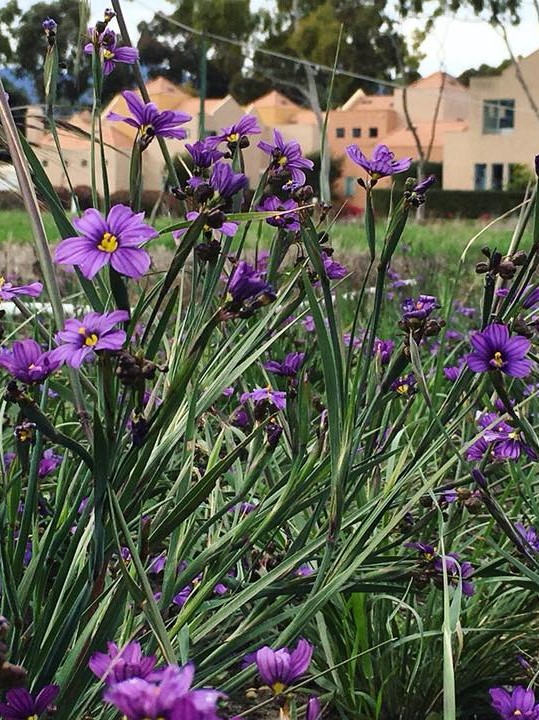 For better or worse, there have been interactions between the wildlife and the people that live around NCOS. Catherine recalls an egret at North Parcel that doesn't shy away from manmade structures. "I'll see him hanging around sometimes on people's balconies, and it's really funny, because he's like one of the neighbors." Teal laughs when thinking of how "the [California] towhees come out to bathe in the water when we're watering the plants - they just splash around with their wings held out."

Elaine also asked CCBER staff how these different experiences with wildlife have influenced them. To Andy, these encounters are "what makes his day" working at CCBER. Beau emphasized the importance of learning about his surroundings to fully enjoy his work. "The cool thing is that anyone who works for 40 hours a week outside, if they're paying even the slightest bit attention to things going on, they will see a lot of cool stuff. It's probably one of the best aspects of working out there. If you learn the plants and start learning the birds, it literally makes any time you're outside way cooler." Ryan asserts that "it's a huge perk of the job, being able to be outside and see all of the life out there. I feel super lucky to be working in what I studied for eight years of my life, in wildlife ecology and management."

Other staff say that seeing the wildlife using the created habitat provides a sense of satisfaction to their work out there. Teal says "it's nice to see the habitat we make being used," and Steven states that "I have a hard time gauging how interesting this stuff is because I see it all the time. It's nice to keep seeing these things, that can be as exciting as the first time. It's just good to know that these restored habitats are being used in some capacity." Cat concludes that it's "definitely cool, and makes you realize that you're making a difference for other organisms out there. It's really nice when you see a restoration site actually getting used - we're not only doing it for ourselves, but for the wildlife in the community."